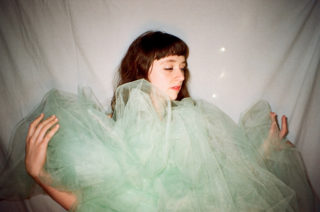 Katie Crutchfield wishes she could play drums, is still disappointed with the 2016 presidential election and could eat avocados forever

Katie Crutchfield has a celebrity face-matching app that has her down as a 64-year-old man. She named her band after her favourite place in the world, and this month releases her fourth album as Waxahatchee, ‘Out In The Storm’, via Merge Records. She’s the latest artist to take our Getting To Know You questionnaire.

Rose Melberg told me not to sweat it if you go a long time without writing songs. I used to think taking breaks from writing meant that maybe I would lose the ability.

I’m going to assume this means ‘pet-peeve’? Took me a minute. I would say that being late really irks me. I don’t mind when other people are late, I just hate when I’m late or stuck in traffic or have no control over getting myself where I need to go when I need to go. It’s a control thing.

I babysat for a family in Manhattan once. They always forgot to pay me even though they were super rich.

Waxahatchee Creek. I named my band after it! It’s peaceful and I have so many amazing memories growing up there.

My sister Allison and Viv Albertine.

‘Side of the Road’ by Lucinda Williams.

I served coffee to Alec Baldwin once. He was nice and tipped well.

Probably my favourite clothes of the moment and my guitar.

I’ve never been on a terrible one! Hoping to keep that streak going.

I try not to have guilty pleasures. No shame.

I’m a really hard person to buy gifts for. Anything I reeeeally want I always just buy for myself. So I’d like to intercept the blame here, and I do think it’s the thought that really counts.

I think I’m pretty good at remaining positive and keeping a group of people positive in a stressful situation.

I’m pretty good at ski-ball. Do you have ski-ball in England?

Currently it’s a pair of shorts made out of sweatpants material, Pons Avarcas shoes and a Kansas City Royals hat.

I try not to let celebrities piss me off *because* I’ve never met them.

My most inane but frequent fear is not being able to fall asleep when I know I have to be up early.

The Heart is a Lonely Hunter by Carson McCullers.

That I’m a sad person because I write sad songs.

According to a celebrity face-matching app, Tim Allen.

I wish I could play drums.

Peacefully in my sleep at the age of 100.

I try not to focus on that but I would maybe make my fingers half an inch longer for guitar reasons.

A person with no filter.

Hang in there – in 10 years all the long hours writing and practicing will start to pay off.

It’s okay to say no.