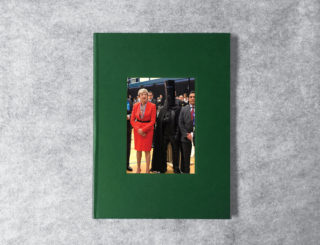 It really does make you proud to be British

The Prime Minister’s two aides glanced at each other in the back of the car. Their chief was mumbling to herself again, as she stared out of the window.

“I don’t want to go,” she said a little louder.

“Hey, come on ma’am,” said one of the aides. “It’s going to be fine. We’re going to nip in, hear the count (which of course you’re going win), show the world how strong and stable you are, and out. 20 minutes max.”

“Of course we’re not,” said the second aide. “Who believes the polls these days, anyway? Trust me, by the morning you’ll be thinking what was I so worried about.”

The PM thought for a second and slowly started to come around to the idea. “Yeaaah, maybe you’re right,” she said. “I mean, the polls are always wrong, aren’t they? Yeah. We’ll go to the count, aye? Walk in – no, strut in – and show them exactly what I’m made of. The odd troublemaker will jeer and taunt, of course, but who remember’s them! People only remember winners… Yeah… I’m quite excited, actually.”

“That’s the spirit, ma’am. And hey, it can’t be as bad as Tim Farron’s count, can it? There was a guy standing against him dressed as a fish finger.”

“Yes, I did see that,” giggled the Prime Minister. “I shouldn’t laugh but how embarrassing for him. Imagine – having to give a winner’s speech at your count with a fish finger beside you making a mockery of the whole democratic process and everything you stand for. I. Would. Die.” She crowed. Her first aide shuffled awkwardly and waited for the din to die down.

“Yes, indeed… There is one thing you should be made aware of before we arrive…” she finally said.

“One of your opponents tonight is called Lord Buckethead…”

“He’s not a real lord,” said the aide with a gritted half smile.

“Well, I know that, don’t I,” snapped the leader of the country.

“Yes, of course… He’s just some silly man, ma’am. Some loner, probably, who’s called himself Lord Buckethead, the intergalactic space lord. It’s no big deal. People will hardly notice he’s there. I mean, you’re the Prime Minister. You’re the only person people care about in Maidenhead tonight. I just thought I should mention it.”

“No, quite right,” said the PM, looking out the window again. She paused. “Well, yes. So what!? It’s just one looney guy. Lord whatever. Who cares!? And, y’know, I felt genuinely sorry for Tim and the fish finger, so I’ll expect the same from my peers and the public. It’s just the one silly man,” she said, lowering her voice. “Just the one silly man.”

The PM whipped her head around. “What do you mean, ‘and Elmo’?”

“Yes. There’s also going to be a man dressed as Elmo.”

“Which one’s Elmo?” said the Prime Minister. “Not the one who lives in a bin? The green one?”

“No, Kermit’s the green one,” said the first aide.

“Fucking, shut up a minute!” shouted the PM. “So I’m clear on this, Elmo from The Muppets…

“… Elmo from Sesame Street is standing against me as an alternative Member of Parliament in my constituency, at a time when I’m the Prime Minister of the country? Is the a fucking wind up? Am I on Ant and Dec’s Saturday… SHITTING HOUSE PARTY?” She tried to laugh but didn’t quite manage it. “I give up,” she said, throwing her hands up in mock resignation. “Is this because of what I said about the field of wheat? Is this character assignation because I’m not enough of a rebel?! I suppose if I’d said I’d eaten a bong at university everybody would think I’m cool like David and his rock and roll music, would they!?”

At the count, the Prime Minister dutifully met the other candidates. It was worse than she feared. Lord Buckethead pressed her on his manifesto, especially the legalisation of the hunting of fox-hunters.

Buckethead did a dab when it was announced he’d won 249 votes.

She was sad when she won.