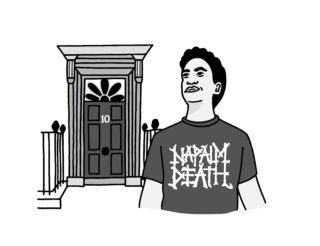 It’s the end of the decade, and what a decade it has been. Wetherspoons made an app, Ed Miliband attempted unsuccessfully to get into both Number 10 and Napalm Death, and that Warhammer Nazi off YouTube got milkshaked (milkshaken?) while standing to become a UKIP MEP. What a decade the 2010s have been. Well done everyone. Here’s another article about What Has Happened To Us.

As we teeter on the precipice between socialism and barbarism even more precariously than ever before, let’s examine how the musical infrastructure of the UK is holding up today, compared to the point at which David “Scourge of the Sty” Cameron surprised nobody more than himself by becoming Prime Minister in 2010, useful idiot Nick Clegg bouncing along in his pocket like a baby kangaroo. In 2015, it was found that 35% of the UK’s grassroots music venues had closed down since 2007, and the country’s nightclubs had nearly halved in number since 2005. Iconic spots like London’s Astoria and Manchester’s Roadhouse were among the casualties.

In response, then Mayor of London, Boris Johnson, set up the Music Venue Taskforce, the effectiveness of which is basically unclear (but, hey, he likes The Clash, so he must be pretty cool and really care about DIY music, right?). Its 2017 progress report, now under the mayoralty of Sadiq Khan, is full of vague recommendations and descriptions of various legislative achievements, some of which are undeniably laudable, but many of which feel rather speculative, patched together with well-intentioned principle rather than concrete, quantifiable achievement. One of the few visible results of the 2017 update was the creation of the position of Night Czar, whose first and current incumbent, Amy Lamé, has a pretty mixed track record in the job so far. Yes, she played an important role in the reopening of Farringdon superclub Fabric, but her inaction over the 2018 introduction of restrictive curfew legislation in Hackney – an area that’s teeming with far smaller, more accessible venues and clubs than the unquestionably important but hardly grassroots-level Fabric – was widely criticized.

The plight of music venues in the UK is a familiar story, so I don’t want to dwell on it too much here, but there’s one thing I’d like to hammer home: we can’t rely on those in power to save independent culture. The British DIY underground can only sustain itself through mass, active participation, not to mention the willingness of those participants to cough up from time to time. Should we really be surprised that London’s Night Czar trumpets her role as the ‘saviour’ of a world-renowned superclub, but is rather more laissez-faire (in practical terms) when faced with the murkier, less glamorous, less lucrative issues of venues further down the food chain? Why would we expect a legacy of Boris Johnson – a man whose mayoralty was characterised by a constant stream of architectural follies, political idiocy and thinly-veiled contempt for the London working class – and now under the stewardship of Sadiq Khan, an undoubtedly preferable but still rather ineffective agent of change, to do anything at all for the abstract, difficult-to-measure underpinning of the city’s cultural life? Real social change, particularly of this nature, is built at street level. We all know that Spotify and Amazon do fuck all for the artists whose value they extract so horribly efficiently; we must seek to redress the balance at an individual level, by directly supporting and participating in the independent culture from which we all benefit.

I’ll get off my soapbox to briefly re-tell the parable of an unexpected hero of the independent British music of the 2010s. A man who valiantly fought against institutional prejudice and corporate power to champion the cause of a marginalised group. I’m speaking, of course, of Conservative MP Matt Hancock.

The answer to the question “what if you put one of the useless civil servants from The Thick of It in the machine from The Fly with a happily tranquilised Labrador”, Hancock has done some pretty shit things while in Conservative and coalition government over the past ten years, albeit in the kind of contentedly absent way that suggests he has no real idea what he’s doing. Yet this is also the man whose letter to Sadiq Khan led to an inquiry into the use of form 696, a controversial piece of risk assessment legislation that demonstrably profiled and targeted largely BAME-led music events. Following the inquiry, it was repealed in 2017, ending a long and torrid ordeal for artists and promoters nationwide. As genres like drill continue to be the subject of much pearl-clutching from the morally dubious likes of the Metropolitan Police, the Tory culture secretary somehow played a blinder, genuinely helping the full flourishing of a resurgent grime scene. Pretty much everything else he and his government have done over the past ten years has made life far harder for marginalised people in this country, musical or otherwise, so this was quite the turn up for the books.

What I’m saying is, sometimes help comes from the least expected places, yet the only people who we know want to keep independent culture alive are ourselves. As we career headlong into the 2020s, this feels more important than ever.