There was a point at last month’s Primavera Sound, Barcelona where our photographer emerged from the photo pit and described something he’d never seen before. There, in amongst the usual scrum of photographers jostling to take shots – the performer on this occasion was Kate Tempest – was an artist almost serenely sketching what was happening on stage. Impressed and confused by their presence, we got in touch with the festival to find out more. Turns out Primavera Graphic Sound is a thing. Here, Josep Maria Polls from Escola Joso (Barcelona’s School of Comic Books and Visual Arts) explains more about the concept, and presents some of the artists’ work from this year’s edition of the festival. Thanks to them for sharing.

Tell us about Escola Joso.

Escola Joso is a school which specialises in forming illustrators and cartoonists, created in 1982 by professionals of the sector who wanted to share the values of the artistic creation and its optimisation related to professional needs. With almost 1000 students (in all artistic areas) and 50 professionals teaching. Although it can sound a little pedantic, we strongly believe that the years and our work has made of us a referent in Spain when talking about the formation of specialised artists.

When did your work begin with Primavera Sound, and where did the idea come from?

It was back in 2010. Sagar (who is a drawer) and me as a writer, we worked in a charity campaign involving a blood donation, where the festival was collaborating. Sagar is a really cool urban sketcher and he had been working already in live shows, specially jazz ones, but always in small venues and comfortably seated. That day he decided to start drawing amongst thousand of people, standing there in front of the stage trying to represent the emotion of an indie rock show in his sketch book. It was a unique experience and the experience of the audience who was surrounding us was amazing. Then was when we thought what would happen if we repeated the experience but in a bigger scale, with 15-20 students of the school working through several stages and portraying graphically the shows with different points of view. Alongside with Sagar and Octavi Botana, our third partner at Primavera Graphic Sound and who actually had experience in the music field, we defined and developed the project and once it was ready we proposed it to the festival. They didn’t hesitate for a second and we received an OK immediately. Primavera Graphic Sound was born in 2014… and it’s still running.

How does Primavera Graphic Sound work? How many students attend the festival?

PSG starts every January in our classrooms at Escola Joso. That’s when we open the call for a casting of authors between the students who are actually on their last year, and also ex-alumni. We choose 15-17 people between all the ones who ask for it.

From that moment on, the drawers are asked to find shows, whether they are big or smaller ones, where they can practice live sketching. That’s something similar to a training, so they can get use to the uncomfortable nature of drawing surrounded by the energy of the audience in a festival.

When the end of May comes, they are ready to start.

How do they chose what to sketch?

One or two months before the festival, we have a meeting with Joan Pons, Head of Communications at Primavera Sound, and we agree with him how to approach the drawer’s activity. Usually the festival’s organisation deliver a list of the bands that could be interested in us drawing them. Finally we combine their proposal with the shows the writer has chosen, according to his or her musical affinity with the band, and that’s how the final list is done.

How do the students find the experience of working close to the stage during the performances?

I would say: exciting and exhausting at the same time. It’s really a tough job, from 15:30 to 03.00 for the three days of the festival. But they can’t have enough!

They can decide whether they would like to enter the photo pit to draw the band from a closer perspective, or use a different one among the audience. Sometimes they choose more than one, so they can get different moments and vibrations during the show.

Probably the most rewarding part of the experience is the feedback they receive from the surrounding audience, as it’s quite usual they take pictures and praise their job… during the years, the PSG artists are getting to be known among the audience of the festival.

The images show a range of artistic styles, is that a reflection of the artist’s individual style?

Of course! Each and every one of the artists has been chosen because of his/her artistic personality. This offers different versions of the same show, and through their vision and criteria we are able to discover new aspects and various shades of the bands.

During your years of doing this have you had any comments from performers who have seen the work afterwards?

Right now I can recall Tori Amos, Drive-by Truckers and The GOASTT who even took a photo with the drawers, to NIN, Los Planetas, Built To Spill and Queens of the Stone Age retweeting the drawings… those I can recall now, but I am sure there has been feedback with many other bands. In the end, all art causes interest and admiration, some kind of special connection, between the ones who practice it even when they belong to different practices. 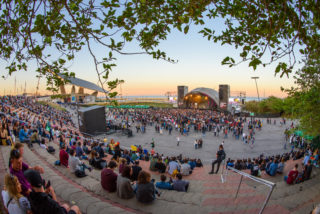 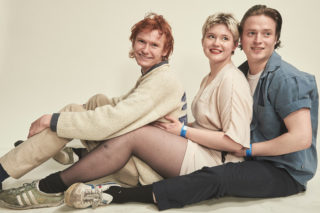