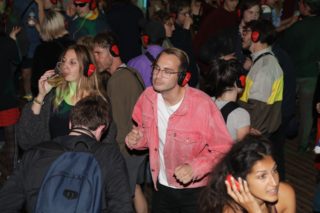 At End of The Road festival, in the middle of the woods, there’s a boat hanging in the trees with a couple of CDJs in it. We’ve DJ’d there for the last two years, to a captive audience ready to whip their Yo La Tengo tees to Bloc Party songs. As an embarrassed DJ stuck between preferring it when some guy crowd surfs to ‘London Calling’ and when nobody’s listening at all, it didn’t take me long to become terrified by the bloke who stood on the crash barrier (there was a crash barrier) staring at us but definitely not moving and the woman whose all-night heckle was “Play ‘Young Americans’ – I’m getting married this year.”

When you’re playing the hits, you’re instantly fucked. You’ve just played ‘Banquet’ and four people took their shirts off. Now what? How do you keep those shirts from going back on? How do you deal with the rejection of people getting re-dressed? So you play The Libertines and you might as well fake a power-outage. 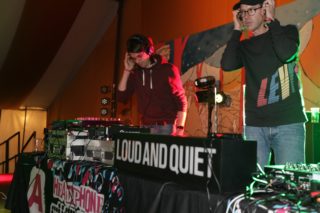 This year we couldn’t deal with that kind of stress so we came up with the idea of a Silent Disco where we could play nothing but the new music we write about. That was one channel, at least. The other was songs that people could take their shirts of to, played by Sam Walton – a man who can actually mix two songs together. To give this rouse some kind of structure, we called this festival-opening event The Time Hop, made it clear that channel 2 was exclusively music from 2018 to prevent people from screaming “Play ‘Young Americans’” at us, and so it felt natural that Sam should limit the hits to 1998.

Now we were facing some fresh hell – is anyone going to listening to channel 2 at all? I mean, even if you love Sink Ya Teeth, are you going to pick that over Monica? The chances of us hearing people shouting along to audiobooks’ new single over ‘Praise You’, they weren’t looking good. Is that worse than the guy staring and the ‘Young Americans’ woman? Because the thing about a Silent Disco is that the feedback is instant and brutal. Murmured and out of tune, but harsh.

Long story short, there were winners and losers on both sides. When Sam did play ‘Praise You’ and ‘Losing My Favourite Game’ and especially (bizarrely) ‘Believe’ by Cher, we might as well have turned our tracks off. (I listened to ‘Every You Every Me’ by Placebo over the song I’d put on.) But IDLES, Shame and Jimothy Lacoste squashed whatever post-Brit Pop Sam had going on at the time. And plenty did listen to Sink Ya Teeth over Shed 7, and ‘This Is America’ over Super Furry Animals. Even when it really did look like our side was dead, when we asked on mic if anyone was listening to our side, half of the room heard us say it and therefore were. 50% – a perfect middle ground between no one and everyone.

As someone who feels awkward DJing to a room that’s empty or full, who constantly questions if people are really all that interested in the new artists that we cover in a world where listening to ‘Scorpion’ felt obligatory rather than a choice, it was probably the most rewarding party we’ve thrown. Validation at last, without anyone taking their shirt off.