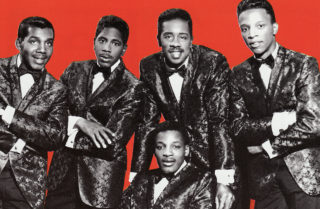 Fun fact: one in five songs on Spotify, according to the streaming service themselves, has never been played in full. With a library of about 20 million, that means there’s about 25 years of music sitting on a server somewhere that’s never been touched.

Un-Herd Music, our new playlist series, aims to address that, ten tracks at a time. Each week we’ll compile a motley selection of tracks with a zero in their playcount column, chosen for their genius or obscurity, their curiosity or just plain WTF-value.

In our inaugural playlist, we kick off with melancholy doo-wop (The Jive Five, pictured), skinny post-punk and a pair of luxurious orchestral instrumentals from the 1960s. Then, Johnny Suxxx and the Fucking Boys give new depth and meaning to the term “cock-rock”, Asha Bhosle (she the subject of Cornershop’s ‘Brimful of Asha’) transports us to Bollywood in 1969 with one of the 12,000 45s she’s recorded in her 75-year career. Between those, there’s a gloriously odd excerpt from a sound-effects record.

We round things out with a none-more-Todd Rundgren slab of yacht-rock, a song that could be off the second Postal Service album, and finish magnificently with ‘Party Like A Fucking Bitch’, the title track from the only album by – who else? – Bitch Machine.