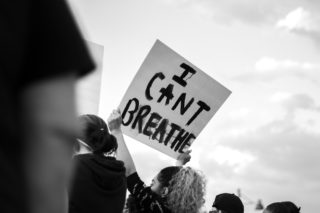 Six months after the murder of George Floyd, a look back on the instant reaction, where we are now, and the danger of reducing the removal of racism to a bureaucratic process

It became the cliché of the early pandemic, but it is incredible how much of life in late 2020 now feels normal. Quarter full buses and trains seem normal. Deserted streets seem normal. Even the daily COVID-19 updates seem normal. 300 deaths today, is it? That’s more or less normal compared to this time last week, I suppose. Day drinking, exercising out of boredom and Zoom after Zoom after Zoom all seem normal until we’re reminded that these are of course, let’s say it together now, “unprecedented times”.

One event, almost six months ago now, was very much ‘precedented’. The murder of George Floyd by police officer Derek Chauvin and the state-led inaction was something very similar to events we’ve seen in some shape or form many times before. The reaction to it, however, was as impressive in scale as the crime itself was heinous. The protests and raw emotional pleas in the immediate aftermath by those most closely affected in Minneapolis morphed into global marches, dedicated TV debates, community-led statue topplings and a level of simultaneous introspection amongst almost all sections of society.

Public-facing institutions, confronted with their own sense of complicity in the creation of an environment where a police officer could feel comfortable spending eight minutes and forty-six seconds killing an unarmed citizen on camera, expressed their support for Black Lives Matter and turned the lens inward in a very outward way.

In sport, footballers, basketball players and F1 drivers now kneel in homage to Colin Kaepernick’s much-seen, largely unsupported 2016 NFL protest. In film and TV, the likes of Netflix removed shows that were deemed potentially offensive (shows like The Mighty Boosh, The League of Gentlemen and Little Britain, all of which featured white comedians in blackface), and created dedicated sections for Black-led stories. Fashion magazines were suddenly awash with Black bodies, faces and voices.

Some of these responses appeared clumsy at the time but we live in a world where every email and message we receive, or social media post we see, apparently demands an instant reaction and minimal critical thought. I wrote an article on my own platform, theRoute.co, in June decrying the lack of self-awareness in the music industry following Blackout Tuesday and #TheShowMustBePaused: here were corporations with storied histories, huge resources and departments dedicated to the welfare of all employees who still needed an extra day to think about the ways in which they may be able to do better, in an industry that has actively exploited Black musicians since popular music was first committed to wax around one hundred years ago.

In a segment on The Dick Cavett Show in 1969, Black American writer and activist James Baldwin delivered a brilliant rebuttal to Yale Professor Paul Weiss’s assertion that while there are some differences between Black and White existence, at the end of the day each person has their own choices and ultimately character prevails.

“I don’t know what most White people in this country feel,” said Baldwin. “But I can only conclude what they feel from the state of their institutions.”

This is a different country of course and a different time, but a look back through the comments on the hastily put out Instagram posts expressing solidarity with Black communities by the gatekeepers of the music industry tell their own story. You will see a litany of incredulous replies from former employees of these institutions who had been mistreated because of the colour of their skin and were offered no protection at the time. The co-opting of the movement by these big businesses displayed the ‘flexibility’ of Rishi Sunak’s day-late and dollar-short winter economic policies, changing tack and putting out togetherness messaging after the tide of public opinion swung too far in the wrong direction.

Baldwin continued: “I don’t know whether the labour unions and their bosses really hate me – that doesn’t matter – but I know I’m not in their union. I don’t know whether the real estate lobby has anything against Black people, but I know the real estate lobby is keeping me in the ghetto. I don’t know if the board of education hates Black people, but I know the textbooks they give my children to read and the schools we have to go to.” Even now, it sounds familiar.

Some of the anger on display on the streets and online in early summer wasn’t just directed towards George Floyd’s killer but towards the watching world, who needed to see this murder in order to finally sit up and listen to what people have been saying for decades.

We all know real change comes from the grassroots and that’s where encouraging work is being done currently. There have been a number of panel discussions and think tank sessions on racism in the music industry set up by numerous groups who have had a long-standing commitment to improving diversity and equality. Many of the conversations have revolved around increasing representation behind the scenes.

Improvements across the board here, however, systemic discrimination doesn’t appear in a vacuum and another set of figures illustrate this.

The latest figures for England and Wales show the use of stop and search by the police is at its highest levels for six years. Stops under section 60, where no reasonable suspicion is required, rose by 35% between 2019 and 2020 to 18,081, with just 4% leading to an arrest. In the same period, Black people were 18 times more likely to be stopped under section 60, according to an analysis of the official figures by the Liberal Democrats.

There is no way of separating those two elements. As increasingly similar as the Black and White British experience may feel in some instances, it remains markedly different in others, and it’s clear who is more likely to be stopped by the police regardless of whether they’re senior level at a record label or not.

It is not the job of the music industry to sort out those problems but there is a danger of reducing the removal of racism into a bureaucratic process; one that is fixated on numbers rather than people’s feelings and an evaluation of the wider context outside of the immediate work bubble.

For example, the experience will be different for the Black promoter on their way to deposit last night’s door money into the bank. They’re just as likely to be worried about being accused of stealing that cash as they are of being robbed by a stranger.

Take this further outside the bubble into everyday life, and it is different for a Black radio plugger looked at with suspicion on a countryside walk in a rural area, or a Black tour manager driving an expensive car around town, and it’ll remain different regardless of whether or not representation rises or falls by 12% in time for the next survey.

These are hypothetical examples, but the recent very real case of Black barrister Alexandra Wilson, who was stopped three times on her way to court after being mistaken as a defendant, illustrates this point more clearly. Job status carries very little weight.

Another stumbling block here is that representational parity in this instance is in the gift of the gatekeepers – who are largely White. Even if we do get to a point where Black, Asian and other ethnic minorities are represented more proportionally across the sectors, there’s an emotional power imbalance that will be entrenched for a long time still to come. No one wants to be given a position because of the colour of their skin, just as the reverse is true.

Another line from Baldwin on Cavett goes like this: “I don’t want to be given anything by you. I just want you to leave me alone so I can do it myself.”

It’s worth noting that, since the murder of George Floyd, we’re early in this new collective process and we won’t see the true impact for years to come. There’s an argument to say that correcting the flaws in an unjust system needs to be artificial and potentially drastic. Can worries about overcorrection be put to one side in pursuit of the greater good?

At this point, the desire to create genuine pathways into the industry for people from marginalised backgrounds must be considered a positive step. The likes of Raji Rags, Women Connect, Native Management, Youth Music, Tomorrow’s Warriors and many others are providing training and mentorship to those who have previously been left behind. If people are given the tools, access and freedom to create their own institutions to stand alongside the traditional gatekeeper organisations then the aforementioned power dynamic changes.

This is not a new problem, and despite the breakthroughs and landmark moments we can identify throughout 2020, there’s unlikely to be an immediate set of ideas that’ll crack it. It does seem more people are willing and determined to try, and that’s hopeful. As we look towards 2021, consistency of implementation, a holistic attitude towards the impact of new policies and true selflessness of individuals currently in power will be required.