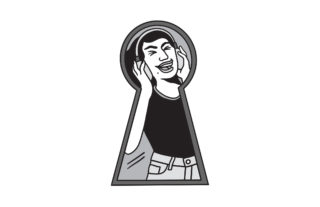 Words by Emily Harris Illustrations by Kate Prior

Finding a song I enjoy is a pleasurable sort of accident, like tripping over in the street but realising the pavement has been replaced with a 12-tog duvet. I’m not an active seeker of new music, nor am I listener of platforms like 6 Music. It usually happens that I get invited along to a gig or festival and see an artist I’ve never heard of, or maybe I see a Tweet or hear some friends talking about a new album and I decide to listen. Feeling the need to impress people with good music taste is a characteristic as intrinsic to puberty as feeling self-conscious, perhaps they are even the same thing, but somehow I’ve never felt this pressure, which is weird because it meant I spent my teens trying to impress with traits that have inarguably less currency in a high school market – for instance, my handwriting. Who really gives a fuck about handwriting?

Time spent caring about the wrong things made me a lazy music listener. I spent nights on MSN practicing my cursive, listening to the same Mandy Moore song on repeat. Fast forward a few years and I was doing the same thing at university, only this time it was Sophie Ellis-Bextor, and it wasn’t MSN, it was WhatsApp, and I wasn’t practicing my cursive, I was doing actual work. I wasn’t only a lazy listener; I was an obsessive listener; a song I liked could give me enough mileage to get through a month listening to nothing else. At some point I got Spotify, and ‘songs’ was born. It’s been causing my friends and family confusion ever since. But hear me out.

‘songs’ is the Berghain of playlists. It’s name, simply ‘songs’, veils the hyper-exclusivity of its existence, as there’s a strict 52 track limit (I’ve tried to think why the 52 is important here, whether it points to something transcendental of my own conscience, that it might subliminally appear in my life like Jim Carey and the number 23 in that film, The Number 23. “Is it a song for every week in the year?” I’ve been asked a few times. “Yes,” I’ve replied, because why not, it could be). Of course, I know more than 52 songs, and so I operate the playlist on a one-in-one-out basis, positioning myself as a mad-with-power bouncer imposing beauty contests on the likes of Celine Dion and Kurupt FM.

I didn’t just build this playlist for a long car journey, or for a run, or for a specific mood – though it serves as a catch all for all of these things – I’ve begun to realise that this playlist has been built as the soundtrack to my life. Listening to an album in full has never appealed to me, the the Top 40 even less so, and the enormity of Spotify playlists available makes me nervous. I prefer the carefully selected lucky dip that is the shuffle function on ‘songs’: will it be Sugababes or The Blaze? Jennifer Lopez or Leon Bridges? Pour it all in my ears at once and clamp my eyelids open a la A Clockwork Orange as far as I’m concerned; the ideology behind ‘songs’ is that I will never tire of it.

To make it as far as ‘songs’, a track has to sit firmly in the intersection of good, nostalgic and escapist. And obviously, I need to have obsessively listened to it for a month at least. To ask me what makes a good song is like asking a dog what makes a good pie. Instinctively I know what I enjoy but don’t ask me to articulate it, because I just can’t. What I do know is every song in ‘songs’ is a proper good song. As for nostalgic and escapist songs, they do what they say on the tin, and I’m not going to bore you with instances where a song has helped me get through a break up or has made me imagine myself as the heroine of a futuristic Stranger Things trailer wherein the noughties gets as much nostalgia as the eighties.

‘songs’ is not a performative playlist, and by this I mean that I would never offer to plug in my phone at a party. Sure, it’s the soundtrack to my life, but I’m the only person who’s been watching my life in full, in it’s many years and locations. No one will understand the days at my first job I spent weeping to ‘South Australia’ by Fisherman’s Friends, they won’t understand either that when I was twelve I choreographed a dance to ‘Do It Well’ by Jennifer Lopez, and now can’t listen to it without mentally performing the combo of kicks and step-ball-changes in my head. To play ‘songs’ at a party is an invitation for friends to ask for the aux cable. It’s not made to be understood or even heard by anyone else, which is why I gave it its vague and abstract name – just try searching ‘songs’ on Spotify. The first time I want anyone to hear ‘songs’ is at my funeral, when I’ll leave the instruction: just press shuffle.