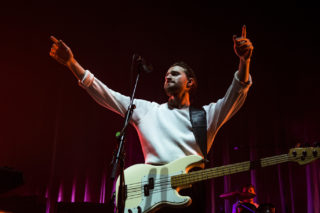 Irreconcilable differences; emotional incompatibilities; a change of musical direction. These are the elegiac tropes banded around amid the day-to-day romanticising of the news that your once-favourite band is separating. It’s always a pleasure to add a little more situational gravitas to the music you grew up with. But in the strata where common rule throws roses on the carcass of any newly deceased musical project, Wild Beasts break the trend. Not for the first time in their career, but for the last.

“The four of us have decided, for our own reasons and in our own ways, that it is now time to leave this orbit. We’re caretakers to something precious and don’t want to have it diminish as we move forwards in our lives,” they wrote.

This announcement came alongside the promise of a final farewell – and here it is, fans packed together in this storied music hall like an oddly sombre game of Tetris. Break-up tours are often expected to be a cynical cash-grab, but this time it feels sincere, and the Cumbrian four-piece are visibly shaken as they take to the stage. A usually loquacious Hayden Thorpe looks awestruck.

It doesn’t take long to appreciate just how much Wild Beasts have to be caretakers of. The opening four tracks slide effortlessly between their first four albums. The heavy-hearted ‘Fun Powder Plot’ serves a cool rhythmic introduction next to the playfully, surreal ‘Devil’s Crayon’ and ‘Smother”s ‘Reach A Bit Further’. Thorpe frees himself from his bass on ‘A Simple Beautiful Truth’, vocal lines dancing liberally around Tom Fleming’s signature delivery and illusory lyrics, and it’s unlike anything else: “God knows why they gave budget to a band like us.” 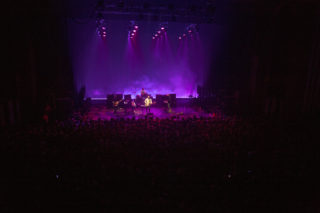 Easing into the performance, ‘Big Cat’ and ‘Alpha Female’ slot in seamlessly to a catalogue-heavy setlist, where each track is received by a frantic and supportive roar. Funk basslines and a commanding rhythm section back fantastical political alternative-realities in ‘Deeper’ and ‘Celestial Creatures’, Thorpe embracing the spectacle of the art-rock frontman in his own ticker-tape parade as confetti leaks from the ceiling.

Fan favourites ‘Wanderlust’ and ‘All The King’s Men’ steal the show. Try finding a more arrogantly nonchalant refrain than “don’t confuse me for someone who gives a fuck.” It all reeks of confidently proud parody; miss a nudge or a wink here-or-there and more fool you.

The two-and-a-half hour set feels like the show where they have defiantly reached the top of their game. Closing with ‘End Comes Too Soon’, they are all too reluctant to leave the stage: “from myself and my brothers, this is a dream, thank you for being a part of it.” A curtain rises for the band’s final laugh – a 20-person strong a cappella choir singing “Cheerio Chaps, Cheerio Goodbye.” You’d be forgiven for thinking that – from the off-set – the band had been writing songs to mark their exit.

So, that’s it then. Wild Beasts are one of the finest examples of a four-star band. Not because they were safe but because they were consistently great. While the writing is now on the wall, the writing is neat; they achieved a top 10 album, their biggest headline tour to date and plotted a dignified departure. In a world where we are served up an excess of everything, maybe now is the perfect time to place the book back at the top of the shelf. With this performance, it certainly won’t be easily forgotten. 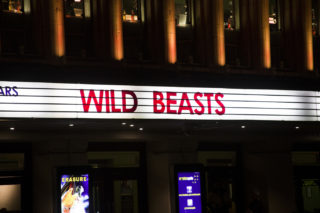 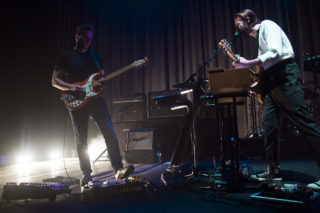