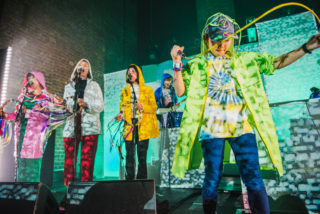 London-based collective made a colourful entrance with their first gig

Home is where the fun is for Superorganism. Comprised of eight members from Australia, New Zealand, America, Japan and the UK, they’re an explosion; a piñata full of confetti, joy and ‘90s nostalgia. They found their sound earlier this year while still living in different contours of the globe, communicating and making music together over the internet. It’s when they traced ‘Something for your M.I.N.D’ that they knew they were onto something. They sent the track to 17-year-old Orono, who was studying in Maine at the time, and she added her vocals. From this point onwards, they knew what to do.

Orono quit school and joined the rest of the band in London, they signed to Domino and moved in together. Seven eighths of Superorganism now reside in Homerton in their own creative cocoon; a house, come DIY studio. However, they’re soon to fly the nest once more.

It’s a sign of the chatter around the group that their first UK show is here at the 700-capacity Village Underground, and not some sticky-floored pub. Despite being newcomers, the place is swamped with those keen to put faces to the mystery. From the front to the pie crust crowd flaking around the venue’s walls, there’s little space to move.

Bell sounds chime through the venue, and out float the band, colourfully clad in fisherman jackets. The collective emerge in a conga line of smiles, breaking off one-by-one to take to their part of the stage. An alarm clock sirens, and their display projects VHS footage of a rocket ready for take off. “Buckle up” the projection fuzzily reads, and the music starts.

Orono sings to the crowd like they’re in her living room. Despite her young age, she’s ready for this – determined to conquer all. She faces the audience throughout. Her voice is cool, lethargic, effortless. Her three back-up-singers mimic Motown moves with a modern twist, cradling ribbon laced tambourines and crescent moon beams.

And their sound is a mountainous range of sherbet dusted peaks – each track as tall as the other, each decibel as fear free and glee ridden as the last. All three tracks they’ve shared to date get aired, along with six others. Like the single ‘Nobody Cares’, their sound is a shuffled deck of Moldy Peaches vocals, Gorillaz instrumentals and The Avalanches’ uncontainable glee.

On the basis of tonight, Superorganism it seems are ready to go straight to the big stages. They’re a mosaic of fun, fuzz and courage. A case of everything in excess or nothing at all. 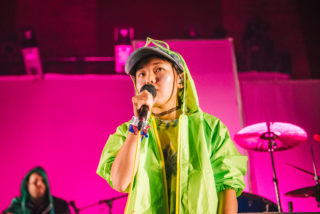 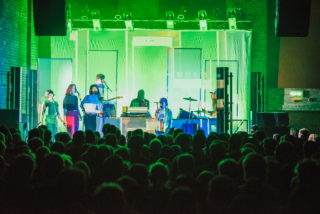 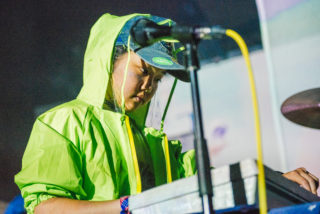 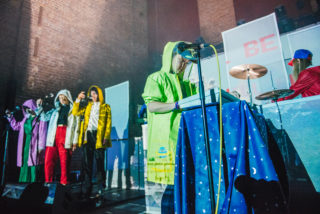