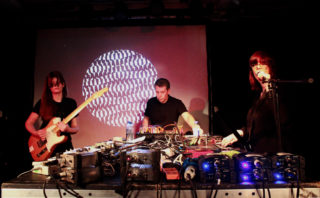 Cosey Fanni Tutti, Throbbing Gristle's Chris Carter and Nik Colk Void from Factory Floor gather for what might have been the final time

As part of the celebrations for Hull 2017 City of Culture the music covered is vast. In April John Grant will bring his four day North Atlantic Flux event to the city, bringing together a number of Nordic groups from Gus Gus to Lindstrøm. The summer brings another festival within a festival in Where Are We Now, which will feature the likes of Young Fathers and Charlotte Church. However, despite the international scope of artists featured across the year, one of the most exciting in the calendar has its roots firmly planted in Hull itself.

In 1969 Cosey Fanni Tutti co-founded COUM Transmissions in Hull, a music and performance art collective who’s work is the centre point of a major exhibition in the city that has just wrapped up. To celebrate the legacy of COUM, which would later mutate into the pioneering Throbbing Gristle, one of Tutti’s current outfits play a rare live show: Carter Tutti Void. The group consist of the trio of Tutti, her long-time creative partner and Throbbing Gristle man, Chris Carter and Nik Colk Void from Factory Floor. They played their first ever show in 2011 and have suggested tonight’s performance may be their last ever.

Anthony Child, better known as techno king Surgeon, plays a supporting set scoring Paul Verhoeven’s 1995 film Showgirls. The dialogue is bludgeoned out of the picture by a dense and bubbling bass-heavy drone that adds a bizarre but entirely absorbing tone to the movie, especially the choreographed dance scenes which gain a further intensity with the heady sonic fog adding to the sense of fierce competition and brooding malevolence that lurks within many of the characters on screen. It’s a piece of music that simultaneously allows a feeling of beauty and ugliness to manifest and roll around filthily together.

Carter Tutti Void are placed around a giant table loaded with colourful wires, pedals, switches and blinking lights with Void’s guitar in place around her neck. It’s Void’s sparse strums, strokes and whacks of the guitar – often with a drum stick – that begins things as she tip taps-the stick against the body of the guitar, merging a percussive flurry with ambient reverberations.

The nature of the project is based around improvisation so the set grows and mutates with an unpredictable force. It’s often far from harmonious, clunky even early on, but the light treading on one another’s toes as they find their feet breeds a sense of excitement of plunging into the unknown rather than any galling sense of error.

The set continues to build and rhythms begin to interlock, switching between the melodious and the gloriously discordant as Tutti’s heavily treated vocals then wail out like a ghostly presence filling the room. Tutti herself plays guitar in short little bursts, often using a guitar slide, perhaps in a perpetual nod to her early love of Hendrix; although like Hendrix her playing seems more interested in deconstruction of the norm rather than embracing it and any whiff of formulaic slide guitar playing is obliterated as the sounds that emit from it pool with the now almost jittery electronics that are furiously rising and building with pounding drum machines. It creates a sort of industrial techno that throbs and twitches like an involuntary muscle spasm.

There are moments when the trio lock into grooves of unshakable proportions and the room begins to move to thundering unison with them. The desire for them to sit in these moments and ride them out into orbit is strong but they seem to have little interest in maintaining any sort of head-down stomp for vast periods of time and they intentionally disrupt grooves, bring in groggy waves of electronics to slow things down, stop and start flows. It very much feels like the process of something being built, completed, deconstructed and rebuilt. These creations are then played, toyed and teased with but aside from the odd smile between them, there’s little in the way of eye contact or interaction, they seemingly appear to intuitively know where to take the evening between them.

The build that has been erected throughout the evening begins to reach its apex and there’s almost a burst of acid house euphoria that breaks out in the set’s final moments as industrial hisses and clangs rattles out underneath it with shuddering force. A propulsive drum pattern emerges, almost sneakily, from what feels like nowhere to send the final moments into a dizzying close as all three intertwine to create a sound loaded with brutality and beauty in equal measure.

Yet despite all the joy of watching something new being constructed right before you, the most profoundly spiriting feeling about the evening is that whilst only next door there are rooms filled with history and retrospective celebration that directly links to tonight, everything about the music created never sounds anything other than blindingly contemporary.