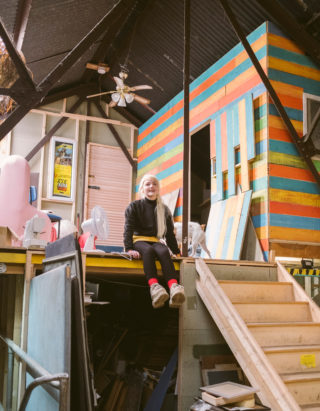 Inside the lawless and playful Fire Eye Land

Turn off an unremarkable residential road somewhere in the stomach of Margate, Kent, and there’s a path bumpy with broken rocks that leads to a looming brick shed. On the outside, written in white capital letters: Fire Eye Land. The narrow alley that leads to the building’s side door entrance is cluttered with an assortment of items stacked against a wall – tatty garden chairs, a canoe, paint pots, a bicycle, splintered wooden pallets, a bathtub and, quite literally, a kitchen sink (rusting).

“Wolfff!” cries BABii as she opens the door and encourages a small white and brown dog to calm down. If the entryway is jumbled, then that’s got nothing on the accumulation of stuff that’s inside. Depending where you register on the spectrum, Fire Eye Land is either a panic attack-inducing mixture of disorderly junk or a treasure trove paradise of materials, knick-knacks and miscellaneous crap. A cross between backstage at a surreal pantomime and a shipping yard boat builder’s, Marie Kondo would take one look and walk out. 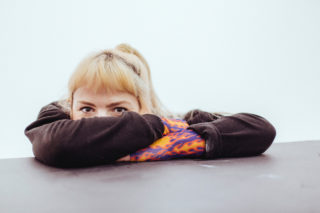 It’s known locally as an affordable, relaxed and liberal co-working space for creatives. Downstairs, the naked concrete floor has been divided up into studios, haphazardly separated with colourful front doors that look like they could’ve been lifted from a local skip. There’s one huge room, a white cove photography studio where Wolf gleefully bounds around leaving pawprints on the floor. A scaffolding staircase leads up to a first floor mezzanine that reaches up to a sloping corrugated roof. On the landing before the attic, another studio, this one covered in artificial turf, belongs to jungle producer Congo Natty. Out the back in the garden the theme continues: more sheds converted into individual studios. Stuff hangs from trees and care has even been taken to artistically decorate the back of the door in the communal toilet. Returning inside, a corridor that travels to a communal kitchen is at overflowing. A wall decorated in miniature dinosaur figures is never explained, nor is the Christmas tinsel still hanging from the ceiling.

In comparison, BABii’s own room – where she works on music, visuals and semi-acts as caretaker of the building – is an oasis of minimalism. The four walls are painted white; a Mac computer sits in the corner by a desk supporting a keyboard and speakers. Comparatively, any decoration is sparse; the odd houseplant, Japanese artwork collected from her travels and a colourful rug on the floor. When she’s in Margate, this is where BABii is. Everyday, 12 til 12.

Fire Eye Land wasn’t always this way. Originally the purpose was much more simple – a workshop where her father would come and make driftwood furniture in his spare time. When the picture framing business he shared the unit with liquidated he took over the building and set about turning it into the multi-functional grotto that it is today, albeit one with the hallmarks of a self-taught tradesperson hanging out of its walls.

“He’s a bit of hoarder,” BABii says, understatedly. While it’s chaotic, it’s also a building that says, ‘look, you can make anything you want today, just teach yourself how’. 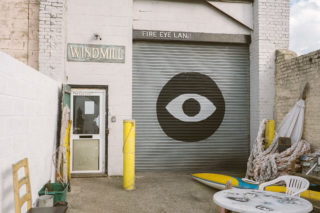 My first contact with BABii’s music was in the incongruous surroundings of the Southbank Centre’s Purcell Room; a mahogany-walled chamber with comfortable seats named after a 17th century composer. BABii was on stage whacking a drum pad supporting her boyfriend, Iglooghost, at his London headline show. The music was mesmeric: ice-cold cyborg electronica given a human heart with her whispy vocals. The low-end bass was so loud it created ripples in my drink. Truthfully, she puts it better: “Have you ever had a blissful, pastel-coloured, floaty dream where you want to punch someone so hard in their face that all their teeth explode? My music is like that.”

Later that evening she re-appeared as part of Iglooghost’s ingenious stage show that she’d co-conceived and helped create the costumes for. She was one of the characters dancing around. Tamei, or maybe Mogu. The whole DIY production was proof that imagination is as valuable as any deep-pocketed budget, a philosophy shared by the other members of their amorphous online collective, GLOO, that includes other musicians like Kai Whiston and Umru.

“It’s our gang,” says BABii, simply; a group of online pals supporting and competing with each other.

The remnants of that show is here in Fire Eye Land today, the painstakingly crafted figures placed up in the loft. Iglooghost, wearing a pair of Crocs and a neon windbreaker, is too, politely introducing himself and plotting a new music video with a visiting friend. Their partnership goes back a few years to when the pair shared the bill at a show in nearby Ramsgate and hit it off instantly. But, for BABii, it has been a long route to get here. 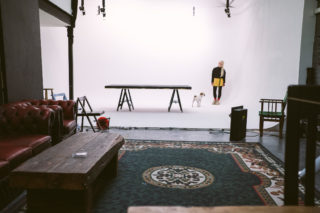 Born in Yorkshire, some of Daisy Warne’s earliest memories are of running around the full scale medieval village her father had constructed in a giant mill in Batley. “It was lots of little houses or shops selling vintage furniture and different clothes,” she says, sipping an early-afternoon cider in a small bar located on Margate’s picturesque harbour arm. “My dad also put £500 worth of pennies into the floor because he thought it’d look cool.”

She continues: “There was a big torture chamber that he made in there as well that I would rollerskate around, and a bed of nails. I’m sure that wasn’t very safe. I was around a lot of artists. A guy called Bob got me to make a voodoo doll once, so I ran around the mill talking to customers and being like, ‘look, I just made a voodoo doll!’. I was quiet feral as a kid – dirty fingernails and a bit grubby – but having creative people around me got me making things. It was quite an aggressive and dark place to grow up as well as being amazing at the same time.”

Music was present in these early years, too, but mostly in the form of her dad’s record collection and a bugle she’d been gifted and mostly used to terrorise visitors. “I used to drive everyone crazy,” she laughs.

At that point, things began to accelerate. First with a move away from Batley to Ramsgate where the family opened a store specialising in African instruments. Shortly after they upped sticks and relocated to Toronto (her father, as well as being a master handyman, is a Canadian former ice hockey player) where her sister was born. “I was so sad when we left,” she recalls. “It was the first time I’d really made friends because when I was younger I was just a bit too weird for kids to try and interact with me too much. In Canada the kids were all friendly. The cool kids are the smart kids. I felt more comfortable there.” 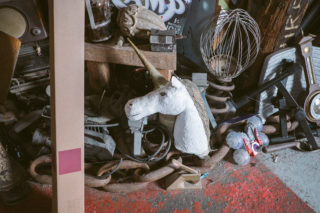 But Ramsgate was beckoning again, and her teenage years were spent there by the sea. “It was run-down and rubbish, which meant there a lot of time to make things,” she says. At 16 she moved to Brighton, an early student at BIMM (British and Irish Modern Music). She’d signed up because her best mate had, and once there she wrote her first songs, even if she’d sometimes tear up with nerves when she performed them in front of others. After that, BABii spent two years working as a chef, which she loved, but never saw as a long term plan. Intuition coaxed her back into education, staying in Brighton to take up a degree in Music and Visual Art. “I just like making pretty things and things that sound nice. I learned to bring concept into whatever it was that I was doing.” At the same time she was also working as a freelance music video director, and formed a band – electronic-pop trio Us Baby Bear Bones. That was going well after university until her bandmate quit when they were weirdly offered a support slot with Sophie Ellis-Bextor and it all fell apart. The same was true for BABii’s relationship at the time. When that ended, she cut ties with the south coast and moved to Margate to begin again. 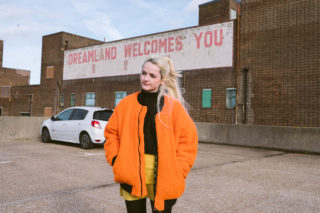 At first the idea of making any more music was a big turn off. She would make it in secret, and eventually realised that much of it was actually about secrets. “In that relationship there were a lot of secrets, and I felt like I was a secret, so those things naturally came out in the songwriting. These were songs I was just writing because I needed to get rid of my brain garbage.”

The result is HiiDE, her debut album that comes out on Deathwaltz Originals in July. A couple of years ago dub music legend Adrian Sherwood had come across her music via an old family friend, and BABii part recorded the album at his studio under his tutelage. It’s a collection of songs that’re highly realised, but that’s no surprise given her history for ingenuity (she talks excitedly about one-day writing a touring musical but with “interesting music, not musical music”).

What sets the BABii project apart – the album, the aesthetic, the sonics and the GLOO community – is the uniform attention to detail; the pursuit for perfection, even when the tools to achieve it aren’t automatically to hand. Case in point: she mentions how she and Seamus (Iglooghost) recently spent an entire day decorating a harddrive as a boulder just because the online merch shop they’d just launched didn’t have a symmetrical amount of items for sale. “We’ll go to that extent sometimes – we were in hysterics when we realised what was going on,” she laughs.

That ability to build something from nothing sounds familiar. “My Dad? Yeah, he’s never defeated, that’s his thing. I guess there’s no point in doing something if it’s not special, right or good.”