“I grew up around organ music in church,” says Joscelin Dent-Pooley, “and you can’t do that in a Soundcloud release. I love spectacle”

Google Jerskin Fendrix and one of the first things you’ll see is a Guardian review of an opera he helped produce for the V&A. Delve a little deeper and you’ll find a series of bizarre, extremely well-executed music videos for a set of even stranger singles. Click through to the second page of search results and you’ll start seeing listings from shows at the Windmill in Brixton and a string of tour dates with the pub’s coveted alumni Black Midi. If you discover his Soundcloud you’ll see tracks that go back years. Try and find out anything about the musician beyond a vague association with south London’s new alternative scene and his name, though, and you’ll draw a blank. There are hints of the singer and producer everywhere when you know where to look, and yet each one seems designed to beg the question: who the fuck is Jerskin Fendrix?

As it turns out, Jerskin Fendrix isn’t the alter ego of some lofty academic or a disgruntled super producer, but is, in fact, Joscelin Dent-Pooley, an upper-middle-class former Cambridge student in his early twenties, now living in London. “People always talk about personas and having an identity on stage or whatever but I don’t think of it like that,” he tells me as we find a table in one of several branches of Costa below Canary Wharf. “It’s [just] a nice thing to hide behind. [Plus] it’s got the same number of letters in the first word as the second word, which is helpful.” Having been introduced to Fendrix via the video for ‘Swamp’, which features disturbingly close up shots of his beard and a scene involving baby hairless cats breastfeeding in high definition, I have to admit, I’m a little disappointed.

However, Dent-Pooley has his own unusual backstory, all be it one that’s more familiar in the annals of British culture than his music. Born in Birmingham, he was raised in Shropshire, far away from the scene where he’s begun to make his name of late. Growing up he learned violin and piano, attended boarding school and relied on the Internet for contact with the world beyond the countryside. His parents are academics and preachers, religious and studious, dedicated to large books and serious scholarship. “It was a weirdly monastic upbringing,” he explains, emphasising the contrast to his new life in south London. “It takes away some things. You’re not as tuned onto things as people are in the city. I’m still scared of traffic.”

His transformation into the musician sitting across the table began when he was in year ten at school. Boarding schools and country life do a good job of insulating privilege and sheltering its beneficiaries, but nothing stops the Internet. “When me and my friends were in, like, year ten or eleven, despite all being white middle-class dorks, we loved Odd Future,” he says, enthusing in the way that only those who have grown up alongside Tyler and Earl can. Discovering the hip hop collective changed the way he approached music, culture and everything around him. “We were obsessed,” he says. “I love rap in general but the sense of community, and having intertextuality and in-jokes between them in their music, was something that was so satisfying.”

Ironically it was while studying classical music at Cambridge that he learned to reconcile these two influences. There he fell in with a group of like-minded students and creatives, most notably the visual artist Peter Price, who now directs all of Fendrix’s music videos. 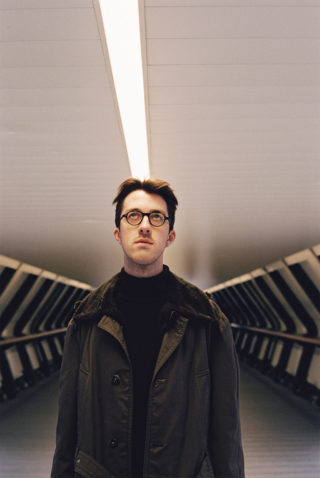 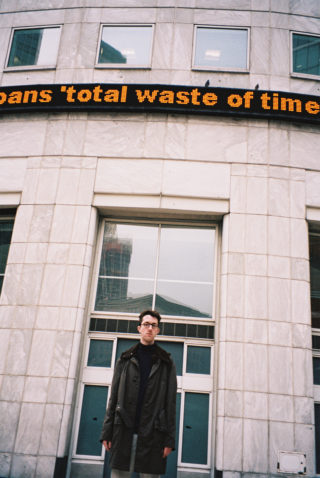 Together with Price and a bunch of first year students, he set about pissing off their straight-laced peers on campus by staging a production of Ubu Roy by Alfred Jarry, widely regarded as the first absurdist play. “We did this play where everyone is screaming ‘cunt’ at each other and having sex on stage and throwing shit,” he laughs. “We found the theatre with the least amount of health and safety regulations and did it there. I was fronting a punk band and we’d be assembled in the corner and people would be going wild on stage, doing coke and screaming and rugby tackling audience members.”

It makes sense, then, that since graduating last year Fendrix has found a second home at the Windmill, the venue that gave rise to Shame, HMLTD and Goat Girl, to name just a few. “I’ve kind of transplanted into this very art school/fashion scene, which I can’t really empathise with,” he half jokes before clarifying. “The Windmill is great! It’s like the Hall of Miracles in The Hunchback of Notre Dame – full of weirdos.”

Although it’s become the subject of much indie media attention in the last year, the importance of the pub in Fendrix’s career can’t be overstated. “No-one would ever put me on for the first two years other than the Windmill,” he says. And yet while he’s made firm friends with post-math-rockers Black Midi, the scene around the pub isn’t quite as cohesive as some believe it to be. “I wish I was best friends with Shame and HMLTD,” he laughs, rolling his eyes, before revealing that HMLTD once approached Price about a music video they wanted to make. When Price declined to lend a hand, Dent-Pooley alleges that the group simply lifted some of the footage from the music video for ‘Swamp’ and used it for themselves.

That others might want to borrow from his work isn’t surprising. Behind all of Jerskin Fendrix’s work is a palpable sense of ambition, the feeling that he’s trying to condense twenty-odd years of voracious cultural consumption into bursts of energy, whether they be individual songs or critically acclaimed soundtracks. “I’ve grown up with all these big books around – huge spines,” he says. “I’m obsessed with the idea of big, almost mythologically big – almost biblical!” It’s the reason, he claims, that he only writes a handful of songs each year, preferring to perfect each one rather than release a constant stream of new material as many artists today do. “I grew up around organ music in church,” he says, “and you can’t do that in a Soundcloud release. I love spectacle.” It’s pretentious but he knows that.

“I’m terrified of boring people,” he tells me later in our conversation. “I hate the idea of repeating myself. It’s stupid because if you listen to, like, a Carly Rae Jepsen song, the chorus is repeated twenty times and it’s great, you never get bored.” 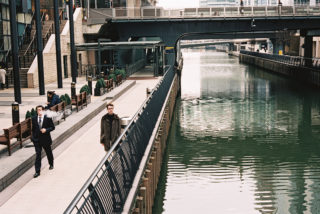 Whether or not it’s stupid, it’s an approach he’s perfected on his most recent single, ‘Swamp’, a bizarre song in which PC Music and Leonard Cohen sit side by side as key influences. Basslines bang with the intensity of SOPHIE’s production while melodies and countless pop culture references appear out of the ether and vanish back into it just as quick. It’s organised chaos of the highest degree; a four-minute run of hooks, each one giving birth to the next until they all disappear into the void.

Of any of his songs ‘Swamp’ also provides the clearest insight into Dent-Pooley, when, midway through, his voice swelling with desire and admiration, he declares: ‘I wanna be Ezra Koenig!’ I ask what is it about the Vampire Weekend frontman that appeals to him? “He’s taken the worst thing to be in pop music right now – wealthy, white, posh, verbose, pompous; things that you try and avoid – and owned them and everyone fucking loves him,” he says, both flabbergasted and awestruck by the concept. “It’s magic! I don’t know how he does it.” It’s clear he sees Koenig as something of a role model; an example of how he can square his privileged upbringing with an earnest love of pop culture made by those who have not shared in it.

It prompts us to briefly wade into the swampy territory of privilege and responsibility, well aware that two white middle-class men may not have the best insights. Many of the bands he’s watched bloom at the Windmill have been praised for speaking out on politics in some way or another, but it’s clear Dent-Pooley doesn’t feel the need to add anything to that conversation. “I love seeing [political art],” he says as we broach the topic. “Women, artists of colour, LGBTQ+ artists – all of these people have big things to be angry about in their work. Everything my demographic could possibly say has been said hundreds of times already, though. What I have to say personally about politics, society, class, even if I had anything to say, is done.” For Dent-Pooley, the best thing to do, it seems, is to recognise his privilege, champion others’ work and otherwise shut up and get on with his.

Having been afforded the space to experiment and be as weird as he likes for the past five years, he sees it as his responsibility to take advantage of it and create the best music he can. “Sometimes I feel like I shouldn’t take up space; like I don’t deserve to, there’s no reason to,” he admits. “The only way I can justify my place in art is to make music that’s really fucking good,” he shrugs, still clearly struggling with competing impulses. “That’s my excuse at least.” 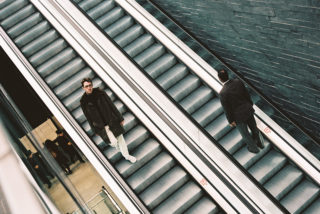 Thought everything had gone a bit weird recently? Wait til you hear this Jerskin Fendrix record