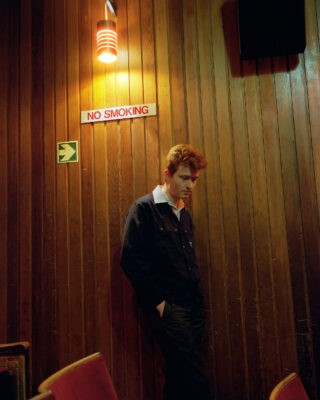 The last time Jack Ogborne and I came face to face was lockdown day zero. Tuesday 24 March 2020 to be precise. “We must stay at home!” was the directive and an overwhelming sense of uncertainty filled the air.

“It’s funny to think, isn’t it? Everything that’s happened since,” says Jack today, smiling at the enormity of it all. Eighteen months have passed and Jack’s journey has seen him finish university and move back home to Bristol. He’s also overseen the death of one band and the birth of another, growing up fast in the process. It’s no surprise that speaking to him today feels different, more certain.

It was the enforced lockdown, in fact, that precipitated change. With his post-punk-cum-jazz band Norman turning heads, Jack had experienced a rise in profile – including the aforementioned, never-published interview with Loud And Quiet (the band split up before we could get L&Q in print again) – but bubbling under throughout was Bingo Fury.

“I had started writing for Bingo Fury whilst Norman was going on,” he explains, “close to when I spoke to you before. I felt happier doing a solo project and then when we decided to stop doing Norman it made sense to pick this up.” However, it wasn’t just the pandemic that drew a line through Norman, as a dramatic midsummer statement revealed in 2020. “A member of the band has behaved in a manner that goes against what we believe in,” read the stark post, something which Jack is at pains to relive in much detail. “All I’ll say is that since the split we have learnt how important it is to communicate, listen and be compassionate to the people around you. Openness is really important and I think we have done a lot of maturing since Norman finished.”

Musically, the two projects aren’t too far apart, and Bingo Fury is still outrageously tough to pigeonhole. In Jack’s words, it sounds like Throbbing Gristle mixed with The Strokes doing James Chance, a description that stuck with me from last year’s meeting, but there is something about the fresh material that’s fully realised, with a considered touch. “We carried over some ideas from Norman so it feels like a natural progression and some of the same people are involved. It’s great having a clean slate to present right from the beginning rather than having the growing pains of the band on show. We were playing shows with Norman and I think people could see it was disjointed, but with Bingo Fury everything feels solidified and whole, you know.”

I mention how Jack looks more comfortable in the Bingo Fury skin, which he emphatically agrees with: “Yeah it feels different as it’s essentially a character; it’s more detached from individuals and feels slightly separate to me. I felt it was an exciting way of changing things up and it’s cool to have the creative output where we can really focus on the visual aesthetic too; we wanted to play around with the format, take us somewhere we weren’t familiar with in the form of a character.”

The visual aesthetic is closing-time cabaret starring a classic dirty stop-out songwriter, and Jack plays his deadpan role to perfection. “Thanks,” he says with a laugh. “I see it as an opportunity to create a more idealised version of myself and my songs. There is certainly a cinematic element to it for me too, where the presentation of ‘Bingo Fury’ comes from a lot of films that I like. To give an example, maybe John Lurie in Stranger Than Paradise, it’s slightly gritty but has a ’50s classic feel to it. Broadway sheen, yes, but slightly more budget.”

Jack seems to find safety in his piano noir balladry as if he’s playing a part, which makes sense the more you hear him talk about it. “It’s all fictional you know, I can make the character do whatever I want them to do and it has nothing to do with real life; it’s liberating and makes it easier to be vulnerable.” 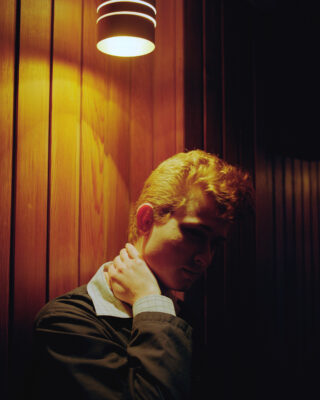 Like everything else with Bingo Fury, it seems the writing has matured moving from project to project. The sketch-like precariousness of Norman has given way to a deluge of defined beat poetry, something which Jack admits he follows for structure. “I like the disjointed but frank nature of that, so I guess I use that style as a template and then the actual content can come from wherever. When I was a bit younger, more of the beat stuff like Frank O’Hara was my influence, but now my main inspiration is someone like David Berman – he really had an impact on me. He is kind of devastating, hilarious and moving in equal measure. The Natural Bridge, the second Silver Jews album, I think I have listened to that the most this past year, and then words have become more significant to me in the run up to Bingo Fury’s releases. If I’m happy with a set of lyrics, I get more fulfilment through that than through the music, to me it’s more of a challenge.”

The lurching, off-kilter jazz rhythms that underpin Bingo Fury tracks could almost be understood as characters in themselves; I ask Jack how he creates the mise-en-scène to fit his lounge lizard persona.

“A lot of the time I try to recreate the feelings that I get with a totally different type of music, that’s how I come up with something interesting. I try and pick things outside of my own realm and a lot of what’s going on in Bristol has shaped that. Going to shows in Bristol and seeing such a variety of interesting music will always impact whatever I make. Real underground and leftfield stuff, artists like Giant Swan, Lice and Scalping, they have been as much of an influence on me as hearing Tom Waits for the first time. They don’t sound anything like me but you can go to an industrial gig and take the intensity you get from that and translate it into your own language, with a different arrangement. That’s definitely been amplified moving back here.”

As we say goodbye a second time I find Jack a more grounded, confident artist, someone who’s found certainty amongst the madness and who’s hometown has steadied his direction. “It’s true,” he says. “These Bingo Fury songs really take me back to the start of lockdown when we last spoke, where I would go on long walks around late at night and I couldn’t bump into anyone. Such a bizarre time and a bizarre feeling for everyone, but look where we are now.”