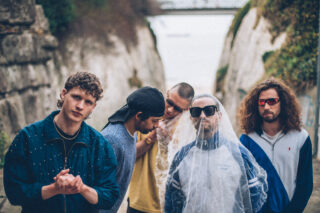 Receiving a cease and desist from Nicolas Cage, soundtracking Blade and other stories from an experimental jazz-rock group playing out of an east London church

Apocalypse music. That’s what they called it. When Lunch Money Life released their lurching debut album Immersion Chamber in 2020, they were all too happy to label their bastard inversion of jazz as music for armageddon. But things are a bit more nuanced now.

“It feels crass now, in hindsight,” electronics maven Jack Martin would later tell me, about what Lunch Money Life used to brand their work. “I believe in it to the extent that the world is fucked up, and we make fucked up music – not the most fucked up – but we choose to reflect that in our… weird stuff”.

Indeed, on subsequent EPs, 2021’s Tarmac The Lake and May’s factory-fresh Under The Mercies, the band are far more expansive than before. Cataclysmic hellfire crescendos are mangled with staggering percussion, shredding guitars and synths that sound repurposed from places as disparate as Chicago drill, vaporwave and Throbbing Gristle’s Death Factory. Vocals come to the fore, as this genre-less colossus goes from strength to strength.

Like all of Lunch Money Life’s material, Under The Mercies took shape in Trinity Centre, a red brick community church around the corner from Dalston Junction. Originally, the band had used All Saints Haggerston, where member Spencer Martin was working as an organist, as their rehearsal space, before burglaries and rodents forced them to congregate in its sister church.

I am in Dalston on the first nice day of the year. Spencer leads me down an alleyway, and in through the back door of Trinity Centre church. Every fibre of my being is resisting the urge to say: “So this is where the magic happens?”

Lunch Money Life have just finished their soundcheck; tonight they will play a sold-out headline show in the church’s main hall, a cavernous space usually reserved for bake sales and fetes. I’m led to the nave, where the band are sat supping Budvar on a table next to the altar.

Lunch Money Life are Spencer (electronics, vocals), his brother Jack (electronics), Luke Mills-Pettigrew (bass), Sean Keating (guitar) and Stewart Hughes (drums). An electric group of friends, they spend the duration of the interview enthusiastically regaling me with stories from their surprisingly long existence, each tale packed with in-jokes, quips and zingers.

“Right at the start there were between ten and twelve players,” Spencer begins, reminiscing about the band’s scrappy beginnings, all of twelve years ago, when the group met on an Ethnomusicology course at SOAS. “It wasn’t really a band at that point, more like a ridiculous idea. People kept leaving, and with every person that left the music got a little bit better. We reached five people and found that to be the best.”

“We need to sack more people to find out where the bell curve stops,” retorts his brother Jack. 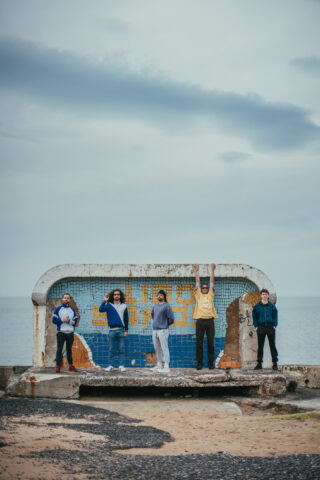 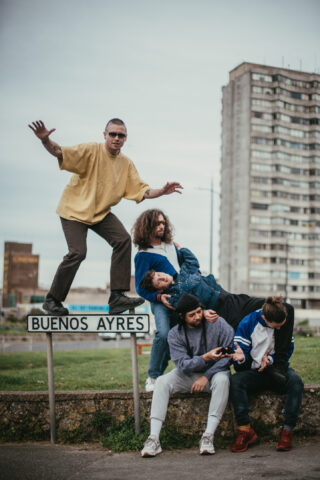 Lunch Money Life first rose to infamy with their debut album, produced by Danalogue from future-jazz titans The Comet Is Coming. They’d been meandering about for the best part of a decade before, but the band view its recording and mixing as their great jump start. “We recorded it terribly,” Jack says. “But we took it to TLC and Danalogue, and they somehow made it sound amazing. It was like, ‘Oh, sick, we can make the band sound like this.’”

The band credit the process of creating Immersion Chamber with shaping their chameleonic sound, although other breakthroughs have been frequent and inspiration has been dense.

“When we wrote the Nicolas Cage track [‘Nicolas Cage Please Get In Touch’] last year, we thought it was ridiculous,” says Jack. “It’s got this prog bit in it. We were like, ‘This isn’t the sound of the band.’ But it is though, we wrote it together. That is a tune we wrote, as a band. We realised we can do any sound, and it’s still going to be us.”

The five-piece are adept at finding inspiration everywhere. We’ll get to their obsession with Nicolas Cage later, but watching films together is a big influence.

“The stuff we’ve been recording recently,” Sean says, “a lot of it came from improvisation. One night where we got really high, stuck on the film Blade, turned the sound off and decided to just improvise a live score. Just played. It was intense.”

“The only rule: we couldn’t stop, at any cost,” Luke murmurs. “Watching Blade just totally set us off.”

What’s apparent, speaking to them, is that Lunch Money Life are intense in their passion for music. “It’s the best thing about being on tour together, driving everywhere,” says Luke. “The aux cable is a mess.” 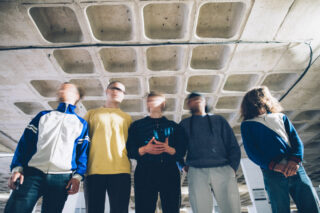 The setting is certainly novel. We’re sitting between the priest’s pulpit and the main body of the church, Christian icons covering every wall. Loose guitars lean up a few feet away from an icon of St Philip with spookily long fingers. There’s a stage door to the left, that you’d think would lead to the priest’s quarters, but is in fact a DIY studio in which the band toy with their music.

“Agnostic probably covers it for most of us,” Jack says when asked about whether the group has a particular religion.

“We’re mostly drawn to it being a free rehearsal space,” admits Luke.

In spite of this, though, religion does seem to creep into the music of Lunch Money Life. New tracks are called things like ‘Royalty Laid Bare by God’ and ‘Holy Water Streaming’, and the music certainly takes on the vastness of the church. For although the songs are written elsewhere, this is the space in which they are given flesh and form.

“People think it must sound amazing, playing in a church,” Jack says. “But, mostly no. Apart from a couple of moments, it’s mostly just bzzzz – I can’t hear anything!”

There are clear perks to the band’s psychogeographical state, though; the vast church spaces which shape their music give the songs the quality of sounding huge. Spencer and Jack have a knack for finding synth lines that sound like faulty house hooks, and turning them into eternal echoes capable of filling any room.

Another perk though, is the immense network of clergy that comes with being the premier church-dwelling electro-skronk band in the area. “We hired a priest to bless some merchandise we were releasing,” Jack recalls. “We invited him to come on stage at our Boiler Room show. Of course, we said don’t step on anything that looks important…”

“As a not-supremely-successful band now, you have to do a lot of stuff on the internet,” Jack summarises: “You have to find it funny yourself, or draw some sort of fun out of it, otherwise it’s just, ‘Oh, make a post now’.”

“On our way home from We Out Here,” Sean says, “we pied the Oliver Cromwell Museum.”

One in the eye for all war criminals.

Luke interrupts, stony-faced, before bursting out into laughter. “I mean, it hasn’t quite balanced out history, but y’know.”

This sense of humour writhes through Lunch Money Life’s oeuvre. 2021 saw them release a tune called ‘Nicolas Cage Please Get In Touch’, which was followed by a cease and desist letter from Cage’s Hollywood lawyer Jimmy J Sunset, prompting the group to call their latest EP’s opener ‘Jimmy J Sunset’.

“We dream of having a kinship with Nicolas Cage,” Spencer recalls. “We were standing outside smoking saying, ‘We need to write a tune called ‘Nicolas Cage Please Get In Touch’, because it’s the only way he could possibly get in touch.”

“Then we went inside and instantly wrote it,” he carries on: “And went, ‘Oh yeah, that’s “Nicolas Cage Please Get In Touch’’.”

Sean interjects: “Needless to say, we were really high.”

“I have to give a shout to the label Wolf Tone,” Spencer adds. “We said we wanted to hire one of those advert vans, and then put ‘Nicolas Cage please get in touch’ on the side of it, and drive around Bristol [Cage owns a property in the area].”

“They were just like, ‘Yep, make sure you film it.’ We just tried our hardest to get Nicolas Cage in touch, it was just that really.”

One more question from me. “Nicolas’ lawyer got in touch over this obsession… for serious?”

But like Cage’s Edward Malus in the very good 2006 Wicker Man remake, I have perhaps seen too much.

“No comment,” says Sean – but his eyes betray him.

“We can’t say,” quips Luke. “Otherwise the next interview will be from Pentonville Prison…”

“Not the cease…” cries Jack.

Lunch Money Life are on the bill (with Theon Cross and Donna Thompson) as a party with throwing at Village Underground on September 19. Full info here