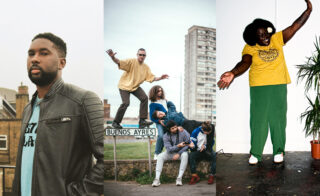 London venue Village Underground is celebrating 15 years this September with a month of special shows, including one that we’ve put together in collaboration with them.

We’ve worked with VU on a bill that is actually incredible, featuring three of our favourite new artists plundering the depths of jazz, rock and R&B.

Theon Cross will top the bill, shortly after his final shows with seminal jazz band Sons of Kemet, who unexpectedly announced their split last month. As a solo musician, Cross released one of our favourite albums of 2021, Intra-I, where he turned his tuba into an entire soundsystem.

Joining him are experimental jazz rock band Lunch Money Life, who are based in a church in Dalston and are featured in this month’s edition of Loud And Quiet, and Donna Thompson who is about to be massive thanks to her EP Something True – a swirl of cinematic jazz and R&B, coming July 22 via the PRAH label.

It’s going to be a brilliant, celebratory night, of one of east London’s best independent venues who, like all others, has had a shit bag of a time over the past couple of years but has pushed on through.

And celebrations don’t stop there – VU have worked with lots of others like us to put together a month’s worth of special shows throughout September, featuring Gwenno, Just Mustard, Wu-Lu, Hatchie and loads more.

Full details and tickets for all the shows are here. And happy birthday to Village Underground.