You are now witnessing the Wall Of Crap

Dan Deacon is one of those people who are synonymous with an adopted city. He was born and grew up in a small coastal town on Long Island call Babylon and remained in New York for college, studying in Purchase, just inside the state border with Connecticut. On graduating in 2004, most of his friends moved into the city, but not Deacon, who made for Baltimore and a warehouse called the Copycat Building where rent was only $180 per month.

Deacon is DIY in an enviably free, historically American sense of what that means, co-founding an arts collective at the Copycat (Wham City), performing in unofficial venues, setting up on the floor as if every show is a Boiler Room set, chowing down another tin of black beans on a Greyhound to tomorrow’s party. That’s certainly how it was when he first moved to Maryland, and played no small part in Baltimore’s experimental noise boom of the mid-’00s, where Wham City artists figured it out beside bands like Animal Collective, Double Dagger, Beach House, Future Islands and Ponytail.

The Copycat Building was both home and venue space, “where we could throw shows and be maniacs,” remembers Deacon. He says that that DIY mentality is still in Baltimore but the warehouse spaces aren’t, largely due to the tighter safety restrictions that followed the Ghost Ship tragedy in 2016, where 36 people died in a fire that tore through an arts collective warehouse in Oakland, California. “But in many ways the scene is infinitely better than it was when I first moved here,” he says. “It used to be segregated and much like an apartheid in terms of who would get exposure, who would get press coverage, who would get grants. I’d say in the last five years, due the uprising around Freddie Gray [a Black man murdered by police officers while in custody] that the scene is much more diverse and much more reflective of the population, which is predominantly African American. It’s something that I was ignorant to when I first moved here, and you look back and kick yourself for being so sheltered, and then continuing to maintain the infrastructure of that without realising it. Freddie Gray made me and a lot of people check our many privileges, and I hope that 10 years from now we’re having the same conversation about now, and that we’ve seen 10 years of progress.”

Today Deacon and his partner live in Bolton Hill, a walk from the Copycat. Out the back is a garage that used to be an old dairy that he plans to convert into a studio. Until then, in the back of the house he has “a proper study”, where he mixed his recent album Mystic Familiar (his fifth record of electronic noise pop, and first to feature his unprocessed vocals) and his score for the HBO documentary on competitive dog grooming Well Groomed. Through my substandard computer screen, Deacon showed me some of the delights that make up his “wall of crap”. 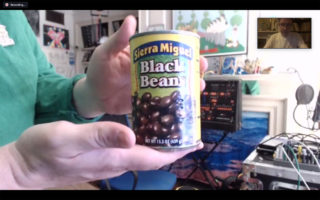 I did my first full US tour in 2005, and I was dirt poor. But if I made 70 bucks per show I would be able to pay rent get to the next show. That was my goal. I don’t have a driver’s licence at this point, or a cell phone, or a computer, or a bank account. I’m as off the grid, idiot punk as you can be. So I’m on tour with this rapper called Height who’s doing all the driving, but I need to work out a way to eat every day. So I go to the cheapest grocery tour in town. It’s a 60-date tour so I bought 60 cans of beans, 60 cans of corn, 60 servings of peanut butter, and 60 rice cakes. It worked out to 20 cents per day to reach 1400 calories or something, and that’s what I ate every day. But the car died halfway, in Fresno. So Height flew home, but I didn’t have ID so I couldn’t fly. I had $420 that I’d profited on the tour – all the money I had in the world – and for $419 you could buy a Greyhound ticket that was an unlimited ride for 30 days. So I thought, I’m going to finish the tour. Because I needed to take the food to survive, I made all of these bags out of pants. I’d use rope to tie up the wastes and I made these satchels that I filled up with the corn and the beans. I made all the shows but one. Everyone was super down – sometimes I’d have to get picked up from the bus, taken immediately to a house to place to 19 people, tops, play the show, get immediately dropped back at the bus station and be on that bus for the next 20 hours. I looked insane at the point in my life, as well, which is an important detail. But I would start my meal with the beans, because they were the worst. I’d drink the bean water first – just get that out of the way; then I’d eat the bean, followed by the driest meal on the planet – peanut butter on rice cake; and then it was dessert – the delicious corn. I’d sip the corn water and then eat all the corn and then drink all the corn water. I was that guy at the bus station for 30 days. I keep this can as a reminder that I could always go back there. 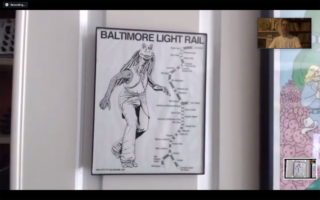 There were no maps of the light rail anywhere around the light rail, and it drove me crazy. And I just happened to have this picture of Jar Jar Binks. I found a map of the light rail and I was going to print it out and hang it around town, and then I notice that Jar Jar’s hand fits so perfectly right here – it’s almost as if it’s Jar Jar’s skeleton or something, so I printed those up and hung them all around town the first year I lived here. I also printed some for a restaurant that I liked and they asked me to stop. 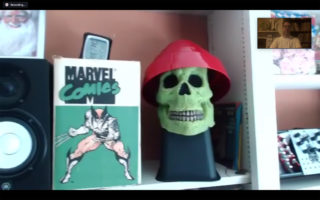 I played with Devo at the United Center in Chicago when we both opened for Arcade Fire. Our green rooms were right down the hall and I met Mark Mothersbaugh and Jerry Casale and all of them, and I was star struck. I’d played with them before, but this was the first time we were hanging out. So after the show was over I went to their green room to see if they were still there but they had left hours ago. But they’d left all of their energy domes. There were still soaked in sweat, and me and my crew were like, ‘oh my god!’. And then we started to notice how crazy their rider was – like, their snacks. On our rider it was raw fruits and vegetables; Devo was Oreos, chocolate chip cookies, every type of Doritos you can imagine, Twizzlers… It looked like a 10-year-old’s sleepover dream list. I have two of these energy domes – they make good bowls for crisps. 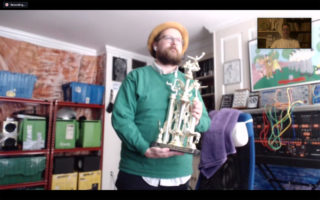 My good friend and collaborator Jimmy Joe Roche got this for me for my birthday in 2006. It blew my mind that you can just go and buy a trophy. Like, they don’t need proof that I’m the most awesome fucking number 1 dude of 2006?! The trophy features a horse and an eagle, someone doing martial arts, someone doing a wild, backflip soccer kick, and three baseball players in a grand display of athleticism. Each one represents a different part of my personality. Particularly the horse.

All the toes are cocks. Some of them have little hats. I got this my first time in Barcelona. My sister lived there and we were roaming around and we ended up in this shop where I see these things and think, these are AMAZING. I asked my sister if she knew what it was, and she’s like, “What do you mean?”. I thought it was something, so I asked my little sister to go and ask the guy at the counter, “What is this?”. And he’s looking at her like, “You’re fucking kidding me, right?”. And she’s like, “No, no, what is it?”. And he tells her and she comes back to me, and I say, “What is it?”, and she says, “It’s a foot with penises for toes”. 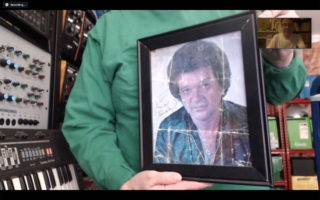 I have no idea who this is. I found this while I was doing court-ordered community service in the Baltimore City Dump. I was there because of an absurd string of events. I went to Whole Foods back when I was eating only raw food. This would have been 2006, when I was the Most Awesome Fucking Number 1 Dude. And again, I was looking a lot more insane – my glasses were covered in Duct tape and I used to wear this long sleeved, woman’s house dress that looked like a lab coat, covered in different coloured flowers. It was the one period in my life where I was skinny. I wasn’t healthy, I was skinny. I was obsessed with raw food. I took the train to get some olive oil and oysters, but I didn’t have enough money to take the train back, so I just got on the train anyway, but then they started checking tickets. I jumped off the train but didn’t realise that the trains had now stopped. So I started walking along the track, and it was miles and miles, mostly through woods. Completely illegal. So I’m sitting on this old abandoned train stop and a train stops there, which I know it shouldn’t. I know this is bad news, and three cops get off and start walking towards me. They’re like: “Where. Are. Your. Friends? Who should be watching you?” And I’m like: “What?” And they’re like: “Where are your parents?” I’m like: “My friends are at home, and why do you want to know where my parents are?” And they started to realise that I wasn’t mentally impaired, so they were suddenly like: “WHY THE FUCK ARE YOU OUT HERE!!!??? WHY ARE YOU DRESSED LIKE THAT!!!???” “This is how I dress.” Anyway, they want to arrest me, but they know they can just for being out in the woods. They can’t prove I was on the tracks. But in Maryland it’s illegal to not have ID on you at all times – it’s like an anti-poverty, racist law. And I don’t have ID, so I have to go to court. They list off a big list of names and I’m on it. They said if we do community service just for today they’ll wipe this from our records, so I’m like, fine. I’m roasting in the sun, bald as a bowling ball, shovelling garbage and then this dude’s fucking face is staring up at me. And I just needed a relic from this day to prove that I was here. Like the beans, it’s a remind of where I could go back to. 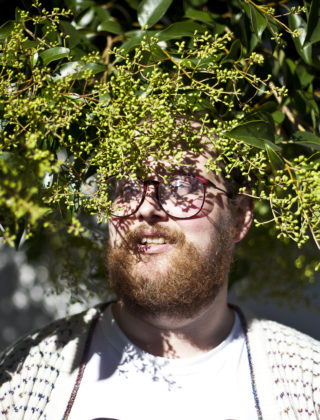 Dan Deacon is an American, whether he likes it or not