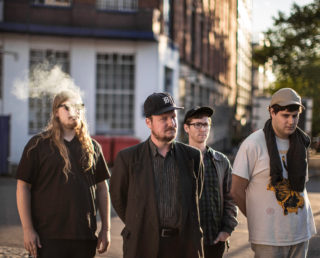 Words by Thomas May Photos by Phil Sharp

“Well at the beginning I mention my friend Dante who’s Filipino. He always has, like, off-brand electronics; I don’t know where he gets his electronics from.” Joe Casey hunches over at the picnic table that his band and I have squeezed onto for our interview. We’re sitting outside Brixton DIY venue The Windmill amidst the chattering overspill of the audience within, the dull thud of drums drifting in and out of perception as we speak. The venue’s iconic rooftop guard-dog watches on a few feet above us, its image adorning our bottles of the house-brand ‘Roof Dog’ beer.

Casey directs his gaze to the side as he draws on a cigarette, his body half-turned as if poised to leave; but the apparent aloofness of his demeanour is belied by the ease and lucidity of his conversation. The singer’s tone is that of low-key sincerity, his responses to my questions more considered and succinct than curt. “So I was thinking, like, what if one day you turned up with a device that you could just buy at RadioShack or a cheap electronics store, and it’s something that would just remove want? It’s kind of a science fictiony theme, but [I tried to] make it as realistic as possible.”

We’re discussing the track ‘Want Remover’, a particularly striking point on Protomartyr’s second record, ‘Under Color of Official Right’, released earlier this year on Sub Pop’s Hardly Art imprint. The song’s concept is pervaded by a dystopian air, evoking images of a society controlled by Casey’s fictional device, its individuals acquiescent and apathetic as concepts like progress, change, and freedom fade to little more than half-remembered ideals. So what do you imagine a world with a want remover would look like? I ask. “Kind of like ours,” Casey answers without pause. “I don’t have a smartphone but I see how important they are for people once they have them, and how people are obsessed with devices nowadays. So I think it probably already exists; we just don’t know about it.”

For Casey, then, the contemporary anxiety towards boredom – our overwhelming dread of any time spent without activity, without connection – has led to the development of a new, more deadened way of existence. I relay to the band a remark recently made by the critic Mark Fisher: that the rapid infiltration of digital media into both the public and private spheres has created such a continuous stream of low-level stimuli that the very idea of boredom now seems utopian. “Yeah, I can see that,” Casey nods. But immediately the rest of the group – up to this point content simply to observe – weigh in to disagree, recalling their wi-fi-deprived journey from France earlier in the day. “Well the ferry was especially bad, because I couldn’t read a book or anything, I just had to stare out of the window,” guitarist Greg Ahee says, the conversation now pacing around the table. “I don’t know if it was boredom,” elaborates Alex Leonard, the group’s drummer, “I just felt like we were gonna die. Boredom and terror.”

There’s a brief pause of agreement before Ahee says: “But the other side, being like glued to Twitter and Facebook all the time, can be a disease too.” 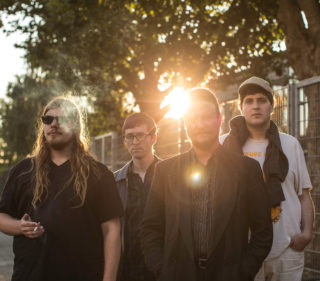 “Are you sure they’re a band? They really don’t look like a band. They don’t do they?” So prattled Time Out, presumably to itself, in a recent profile of the group. Given the urgency and nuance of a track like ‘Want Remover’ it’s perhaps surprising that Protomartyr’s supposed dearth of chic has been such a common point of conversation around the group. That said, it does chime, somewhat ironically, with that song’s portrait of a culture ever more in thrall to quantity and speed of information over and above quality or depth of experience. And the group’s ‘Under Color of Official Right’ is a record that could be heard to raise a rallying cry against such tendencies. Oscillating between an especially barbed take on The Strokes’ taut melodic fuzz, early Interpol, and The Fall’s ‘Hex’-era low-end clatter, the album rages with unkempt energy as lyrical fragments emerge – abstract and mantra-like – from the airless thrash of post-punk noise. These are songs that embrace ambiguity – of tone, of meaning – at every turn.

On this point, I ask if Protomartyr’s music is exclusively depressive or despondent. “Not at all,” Ahee parries. “To me it’s like, at least the feeling I get from it – which is again not just taken necessarily just from lyrics or just from music, but how it all feels together for me – it feels like a mix of uplifting, depressing, happy, sad: it’s a mix of different emotions which can’t easily be pinpointed to ‘oh this is just like downtrodden guys that are just completely nihilistic.’ It’s frustrating to me when people try to pinpoint these really specific, usually depressing, emotions onto it, or any music, but it doesn’t feel that way to me.”

And in such a rejection of one-dimensional meaning, Protomartyr refrain from adopting any explicit political stance in their music, preferring instead the enigmatic, the ambivalent. For most listeners, for instance, there’s a memorable moment of realisation when the apparently rousing anthem ‘Scum! Rise!’ reveals itself, after repeated listens, instead to be a nightmarish tale of a group of children killing their neglectful fathers. “I try to avoid it in the lyrics, any political stance, which I guess in itself is a political stance,” Casey explains. “But I, you know, I try to write from the ground up, the closer [the lyrics] are to reality, or your day to day existence – and I find politics really don’t affect your day to day existence. At least not writing a political song. But if you’re talking about your day to day existence, then you can read into bigger issues, if you want.”

This aversion to didacticism or sloganeering is central to Protomartyr’s potency. The group’s music evokes the amorphous feeling – the intangible sense – of broader social, cultural, and political themes via Casey’s, largely noise-obscured, parables of the quotidian and the personal.

“Like, we have a song about one of Detroit’s mayors,” Leonard offers, “but that’s still not a politics song, it’s like a little story.” The song, ‘Bad Advice’, takes the figure of Kwame Kilpatrick, onetime mayor of the group’s hometown, as its inspiration; but rather than critiquing directly the widespread corruption that characterised his term, Casey comes at his story obliquely. “In that song, it kinda came out of the idea, I was thinking about bad dads. I had a good dad, but there are people out there that don’t. Or just how you are corrupted by who you’re raised by. And I felt like in that case, when he was arrested on the news somebody was like, ‘oh Kwame was let down by his dad. His dad led him astray.’ And I was just kinda thinking and that’s an interesting way to talk about that. Being vague enough, that if you didn’t know Kwame Kilpatrick, you could still get from the song that’s it about people getting too big headed and then getting brought down.”

A short passage from Barry Shank’s recent book The Political Force of Musical Beauty feels especially relevant to this point. Writing of Patti Smith’s ‘Horses’, Shank notes: “Rock’s political force does not follow from its ability to inform its listeners about the social real. Rather, this power is an effect of rock’s production of musical beauty.” Indeed, when I mention that I’m able to understand only a small percentage of the group’s lyrics, Casey replies simply: “That’s not our purpose.” Music, and art more broadly, does not derive its force from the careful development of theses or theories. Instead, music – even that with words – creates aesthetic experiences that speak non-verbally, communicating abstracted ideas, tones, shades untouchable by language.

Specifically of the anger and violent imagery often erupting out of Protomartyr’s noir soundscapes, Casey tells me: “Well with me, there’s like two different kinds of anger. You can get angry at something specific. Like some of [my lyrics] are comical; like in the song ‘Tarpeian Rock’,” – perhaps his most Mark E Smith-indebted moment – “it’s just some things that pissed me off. But usually when you’re angry, you kinda like lose yourself and you’re not thinking straight when you’re angry. So lyrics or the song shouldn’t be specific, it should just be like the loose idea of anger. It doesn’t really happen specifically.”

After a pause Ahee picks up this train of thought, arriving at what could perhaps be seen as a guiding principle underpinning his group’s approach to songwriting: “Yeah, for me, what music can do that some essay, or some other kind of writing, can’t do, is it can express something that you can’t really express just with words. So I think we all kind of got it, like Joe, alright his lyrics are saying something, but we’re also trying to express something besides just that.” But, that said, maybe the group’s reluctance to offer anything by way of concrete interpretations of their music derives from a less profound motive: “Some of the songs have really stupid meanings,” Casey confides later, half-smiling, “and that’s kinda why I want to keep them a secret. Because if I explain them, someone might be like, ‘that song’s about that?!’”