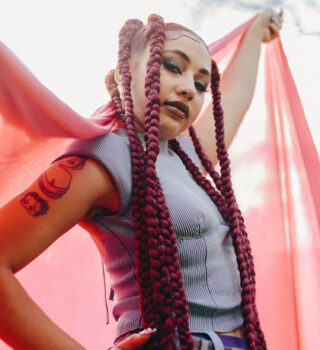 The Skinny Girl Diet singer on working with Neneh Cherry, finding new confidence, and moving from riot grrrl to R&B

Delilah Holliday has grown up. She burst into the music industry in 2012 with Skinny Girl Diet, a band she formed with her sister Ursula and cousin Amelia Cutler. Filled with glorious riot grrrl anger, the trio were out to prove themselves. Going on hiatus a couple of years ago left Delilah space and time to figure her musical identity out for herself; the beginning of that journey is Collective Consciousness – an EP that slinks like Etta James’ Catwoman, moving easily through R&B, soul, dub and trip-hop. “I’m definitely not as angsty as I was,” Delilah reflects. “I don’t feel like I need to scream to get a message out. I feel the way our generation is going, there’s more and more dialogues about really important political things going on right now in society that maybe Skinny Girl Diet started but doesn’t necessarily need to finish.”

Despite a distinct transition in genres, Delilah doesn’t feel like the core intent behind her music has changed at all. “I think with Skinny Girl Diet, we were such an enigma. We loved fashion and everything that punk women weren’t supposed to be into. All of that music lives in its own world – it’s very queer and gives the message: I’m not going to change for you. I personally haven’t seen a big difference in my musical ethos because that was the honest way I needed to express myself at the time, but I guess sonically, it is very different. I don’t necessarily always want to be screaming, I want to sing sometimes. It’s definitely something I do want to go back to and I’m a very big fan of punk music. I love all of it, and I’m just having so much fun expressing myself in every way I need to right now.”

As part of forging her own solo career, Delilah has taught herself production. It’s something she started learning while at school, but as one of two girls in a class full of boys, she soon dropped out of the course. “It was just really stressful,” she remembers. “It felt like you were invisible. I got back into it for therapeutic reasons, because it’s just so fun to make a beat from scratch. With Skinny Girl Diet, I didn’t handle production because I didn’t think I could, but now I’ve had this space, I definitely would love to go into a studio and record a punk record or a dance record. This time has really given me confidence in my own skillset because I’ve just been by myself making stuff.”

This self-confidence is on full show on Collective Consciousness. Opener and lead single ‘Goddess Energy’ is a punchy, forceful track on which Delilah proclaims in its chorus, “Goddess energy, we don’t give a fuck / Goddess energy, we make our own luck.” The closely recorded vocals and syncopated beats give off a simultaneous confidence and intimacy, drawing the two together, so that to know Delilah Holliday is to recognise her as inherently strong. Of the song, she says: “I wanted to write a song about tapping into the divine feminine that lives in all of us – no matter what gender you are – not caring about what people think about you and connecting to mother nature. With the pandemic and everything being closed, I think it’s allowed us to go back into nature and explore, which is something I took for granted before. It’s about setting that time aside for yourself and prioritising your mental and physical wellbeing, not letting toxic people get into your head and just knowing that you’re a bad bitch, basically!”

I ask how this has seeped into her approach to music. “I channel it in my own music by remembering why I started in the first place,” she says. “I ask myself, are you doing it for fame or are you doing it to help others? Don’t just chase the bag or clout.”

It’s a sense of self that has been hard fought for and hard won. “I’ve always got imposter syndrome, like, this is never good enough, I need to do better,” she admits. “That’s quite a natural thing for women my age to have. I think a lot of people around me wish I was more confident in myself, and I’m definitely working on having more confidence in my music. Sometimes I look up at the sky and I’m just like, ‘Wow, I’m really an insignificant person!’ That helps, to be honest. It’s having that focus and being like, ok, music makes me happy and that’s the most important thing. It’s not about anything else.” 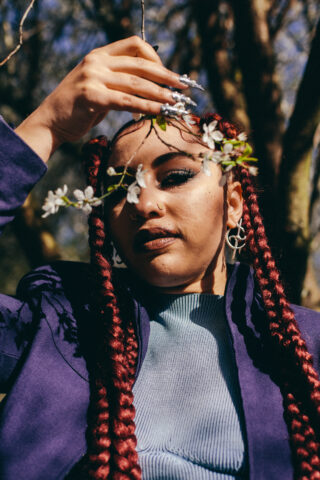 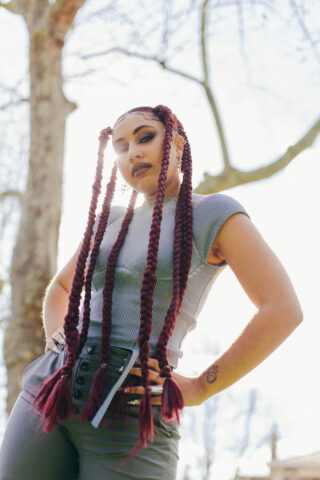 It’s been said before in more interesting ways, but the music industry is big on capitalism, and it encourages competition and oversaturation of talent in order to reap a profit. But behind all that talent are real people struggling, as Delilah is, with the emotional effects of working in this industry. “I think the music industry is definitely oversaturated,” she ponders, “But it’s a positive thing because that means it’s becoming more accessible to people that might not have had the equipment to make music before. It’s a double-edged sword. I’m really happy that it’s becoming oversaturated, but it could get out of hand.”

In an attempt to allay those worries, Delilah stays focused on forging organic connections to create the music that she genuinely cares about. This has been her rationale behind some of the big-name collaborations that have made up her back catalogue so far. ‘Goddess Energy’ was completed while Delilah was staying with Neneh Cherry in Sweden over lockdown, and the whole Collective Consciousness project was partly produced by Neneh’s partner Cameron McVey. She’s known Neneh and Cameron since the Skinny Girl Diet days: “I just really respect them as a family unit in general; it’s pretty much everything I hope to have in my life, and it’s so awesome to have somebody like that allow you to come into their space, mentor you and help you with your own music. I hope to do that to younger artists in the future. It’s really inspiring.”

Earlier in her career, she created the collaborative album B.E.D. [2018] with Baxter Dury and Étienne De Crécy – another organic connection that came about through a friend. “People can hear in the music whether it’s an authentic connection or not,” she explains to me, “and I think collaborations should happen naturally. It’s very important for female-identifying people to keep cultivating and forging these communities together. There needs to be more unity. I go about it on a general vibe; if we have the same interests or personality or we complement each other, that will make the best music chemistry-wise.”

This authentic connection is at the heart of her own solo material, but with this new project, it has become more about connecting genuinely with herself. “I’ve put more focus into the lyrics and trying to communicate a message that I think is really important.” She pauses and looks concerned. “It’s my birth name. I don’t really want to sing songs about meaningless things, it’s your name. I think it’s easier to be more experimental in that respect if your name isn’t attached to your real self or if you use a stage name. I want to write songs to make people feel less alone.”

That’s her main goal with Collective Consciousness. Sparked by an intensified spirituality caused by lockdown and more time alone, Delilah rooted down into herself to reach outwards. “I hope this time has allowed people to realise that all of these pressures in society aren’t worth it, and we should have empathy for each other. It should have taught us all a lesson, I think.”

Though she describes herself three times in our conversation as a pessimistic person, Delilah comes across as quietly confident in the coming of better days. “What’s important to me now is spirituality and faith that it’s all going to get better. I do try and make an effort to be positive and see the positives in everything. It’s more difficult to see the positives than the negatives, but that effort has given me some energy to write music.”

At several points in our conversation, she reaches beyond the artist/journalist set roles to spark a connection with warmth and kindness – we share solidarity in our reactions to the news about the murder of Sarah Everard; we gush about a publication that we have both worked with; we swap nostalgic longings for warm days sat in a field with a beer. It’s her interest in finding this connection that shines through her and her music; in spite of the pressure on new artists to constantly innovate and rush things through, Delilah Holliday is taking her time. Moving entirely at her own pace, she bares part of herself and encourages you to do the same.