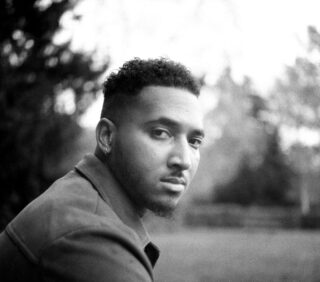 A seasoned jazz artist learning to be true to himself

Having refined a diverse range of artistic strategies and aesthetic textures during his time in numerous jazz-inspired outfits across the U.K., including Project Karnak, Triforce and several more, South London producer, composer and multi-instrumentalist Dominic Canning tackles a range of social and political issues on his new album as DoomCannon, Renaissance. Although it’s his debut as a solo artist, Renaissance is arguably the apogee of Canning’s already-impressive career as a jazz musician. On this record, he assumes his role as a commentator uncovering social injustices through the lens of his Black British identity.

Renaissance collages a range of forward-thinking instrumentations, its atmosphere alternating between melancholia and reflection. It is an exercise in world-building, a sonic utopia devoid of the UK’s systemic racism and colonial legacy, and abundant with equality, humanity and community spirit. As an artist of colour who grew up dabbling in flute and percussion from a very early age and trained himself in piano as a teenager, DoomCannon finds it crucial to make musical work that challenges our existing systems of power.

“[Renaissance] is London’s journey through the dark ages when trust in government is zero to one,” he says of his motivation for this record. “As a Black British artist, I always felt the need to comment on racism that prevails in London. Due to the lack of space in the scene, it has been challenging to get the right message across.” Much of the initial motivation for the record came from the global outcry at the police murder of George Floyd in 2020, and the subsequent mobilisation of the Black Lives Matter movement that summer. “Renaissance is about me reviving and finding myself as an artist [in that context]; about me fitting into these shoes and pulling on my experiences.”

As a session musician, Canning has garnered the attention of award-winning vocalist, Celeste, who invited him to become her musical director, performing live at the Brit Awards and later with Jools Holland.  Having been a regular collaborator with numerous musicians throughout his career, it has been challenging for Canning to place himself at the centre of this new solo record. “It’s a process that has allowed a lot of learning and unlearning since 2017,” he comments. Drawing inspiration from the likes of Sons of Kemet, J. Cole and Kendrick Lamar, Canning’s songwriting is an expression of his frustration at police brutality against the Black community. Yet there is also optimism to be found on the album, embodied by a track like ‘Amalgamation’ embodies – which is also his favourite on the album. “[Although] I am terrible at naming songs, ‘Amalgamation’ [as a title] just felt right. The arc that the song took and how it developed just struck a chord with me.”

Canning is already held in high regard as a frontrunner in the much-feted London jazz scene, having toured as a member of Nubya Garcia’s band and curated a residency at legendary club Ronnie Scott’s. “The London scene is diverse,” he says. “But this diversity is getting increasingly overlooked. There has been a shift in the sound. [Most contemporary London jazz outfits] are sounding more refined, the production is superior. However, the leaning is not towards the African culture anymore. [My] past collaborations have allowed me to touch upon the politics and challenges of being a Black British artist but not address them directly. I feel this album has allowed me to be honest to myself.”

DoomCannon has a voice, and on this record, he is not shying away from amplifying it to narrate  stories that matter. Ever since the conception of this album, his key motivation has been “honesty – [this album] is my letter to London about how it raised me and shaped who I am today. It is a documentation of my thoughts that I have been struggling with for a long time now. I believe that in order to make an honest record, it is necessary to immerse yourself in the experience before making music or stories around it. It\s almost like therapy.”

Renaissance initiates a dialogue, providing a beautiful outlet of emotions. A beginning, not an end. A document of DoomCannon’s experiences since 2017, it aspires to build an accessible sound that narrates a profound message of equality and humanity on a global level. DoomCannon aims to be around for the long run, pushing boundaries and continually reimagining the sound of contemporary jazz.