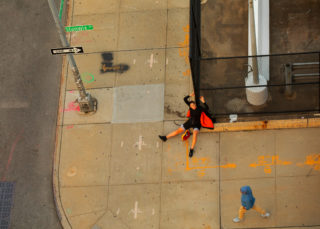 An artist returning to her roots to discover some personal mythologies

Alexandra Drewchin had just returned to New York from Europe when the executive order to stay home was signed into law. Unable to return to her apartment because her 70-year-old roommate was shielding, she headed straight for her mother’s in the countryside, taking only the bare minimum of belongings with her. Not an ideal situation for anyone to be in, let alone an artist as physically and creatively restless as Drewchin. And yet, it turns out that lockdown actually offered the Pennsylvania-born producer/vocalist her first opportunity to decompress since the beginning of the Eartheater project, just over a decade ago.

“I slept for three weeks straight,” she laughs over FaceTime, a lot less intimidating than her cerebral strain of electronic pop might suggest. Speaking from the room she’s renting in Bushwick until she can return to her usual apartment, she sighs, “Honestly, I really needed it because I was pretty exhausted after finishing Phoenix.”

Listening to the intricacies of her fourth album and absorbing its high-concept visuals, it’s easy to empathise with the fatigue Drewchin felt upon its completion. Compound that with the fact that Phoenix was begun the day after she wrapped up vocal takes for 2019 mixtape Trinity – and that the mixing of the latter took place during the recording of the former – and you’re beginning to grasp the 31-year-old’s drive.

Her second solo album for Berlin-based label PAN, Phoenix finds Drewchin eschewing pre-recorded samples and creating every sound from scratch, alongside arranging for and conducting a seven-piece string ensemble. It was written and recorded in just 10 weeks during her artist residency for FUGA, which was based at the ETOPIA Centre for Art and Technology, “this giant, angular, sci-fi mass of stainless steel and glistening glass” in Zaragoza, at the foot of the Spanish Pyrenees. Drewchin was recommended for the residency by former recipient Colin Self – who is perhaps most famous for his work on ‘Unequal’ from Holly Herndon’s 2015 album Platform – and describes the entire experience today as “a dream come true.”

“In New York I’m constantly fighting and scrounging for the right type of space to do what I want to do, and I’ve always had to just figure out money, by working at a bar or selling weed and putting every single penny of it into making music…  [At ETOPIA] I had 24-hour access to the studio, and I lived in the building above.

“So there were some days where my sleep patterns would just dissolve completely. I was basically driven by these periods of obsession where I would squeeze every last drop from the impetus. And in my downtime I befriended a lot of the locals and started hanging out in the countryside on this one farm in particular with a lot of baby goats, and riding a Kawasaki motorcycle up the Spanish hills that look like cayenne peppers. It was completely unbelievable.” 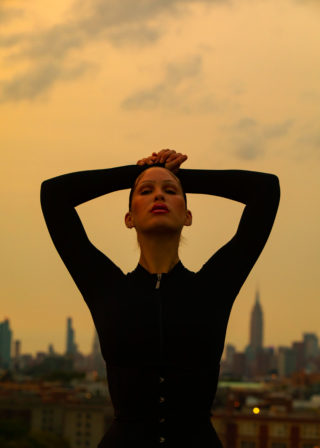 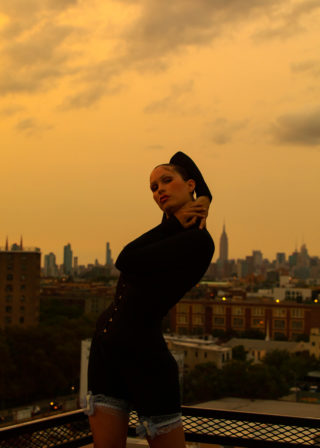 There’s a palpable sense of wonder throughout Phoenix, present in the powerful geological imagery and in the choice of palette, which is largely acoustic and rooted in delicate, finger-picked guitar, serene strings and intricately-layered vocal experimentation. In this respect, there’s a sense of an artist coming full circle to return to their folk roots, a reading that delights Drewchin.

“Absolutely. This record has been building inside me for 10 years. I’ve felt this egg growing. And I think that’s why I gravitated towards geological terms and the sort of the tension between these extremely slow-building and bubbling things that all of a sudden erupt.

“When I was 15 I fell in love with playing guitar, but I had to abandon it to scratch quite a lot of other itches because I knew I wasn’t wise enough to do what I really wanted to do [with it]. Coming back to guitar, I’m transported back to that point in my life where I would discover so much joy and peace in just mastering an instrument, and allowing the lucidity of that peace to open up all of these really lush personal mythologies.”

This idea of growth is further explored through the symbol of the phoenix. “Looking back on the last decade, I can see very clear past lives within that period,” she says. “As you can tell from my work, I’ve been constantly reinventing myself, destroying myself and reinventing myself again. Now I think I’m coming more in touch with my pure essence. And this record feels less exploratory and more direct.”

Drewchin plays the titular phoenix in both the album artwork and the video for ‘How To Fight’, defiant, seductive and powerful as sparks fly from her. There was zero CGI for the shoot, an experience Drewchin describes with a laugh as “painful but totally worth it.”

“I definitely am a very sexual person,” she says when asked about her intentions for the artwork. “I love feeling the conjunction between my physicality and my music. When I feel sexy and strong, that’s when my voice sounds good. And I know that maybe sounds obvious but it hasn’t been that obvious to me, actually. I’ve had family members and controlling ex-boyfriends really try to bevel my edges, and it’s taken its toll on my creativity and my energy and my ability to do my best. So it’s really nice to be reminded every time I look at the cover that I feel really powerful, but it’s important to know that I haven’t always felt like that. I had to fight to get to the point where I’m standing at the top of the volcano, having it shoot up my coochie.”

Fight is the operative word. Raised within the rigour of Eastern Orthodox Christianity, Drewchin recalls an “extremely strict” childhood, characterised by conservative dress, fasting, all-night vigils, prostration, and studying iconography with nuns, in an environment where men were prioritised above women. To break free took courage and she still marvels today at how long it takes to truly dislodge learned behaviour.

“If I were to psychologically analyse myself, I think my intense loneliness as a home-schooled child who did very little socialising, living in the woods, was significant. I remember being lonely but in this really deep melancholic way, and hungry for connection while still being aware of the romance of it. But I think for a long time my albums were like smoke signals, like, ‘Hey, I’m over here! This is what I’m trying to say – does anyone else get it?’ And now I feel so deeply nourished by friends and family and community that I feel at peace.”

“I’ve definitely had those thoughts where you’re like, why am I doing this?” she continues. “Those very dark but essential conversations that I think everyone has with themselves at some point. I’ve felt very lost at times and I’ve found it to be very useful to kill of parts of myself that don’t serve me anymore, just allowing there to be violence, poetically and imaginatively. There’ll be this cathartic moment where I’ll be wrestling with myself deeply and then just cut out the succubus that’s been driving the car for a little bit too long, and the character I feel I am in those moments is this fiery phoenix.” 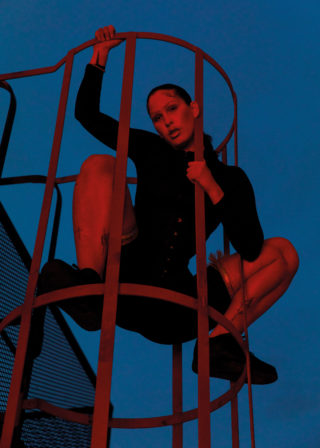 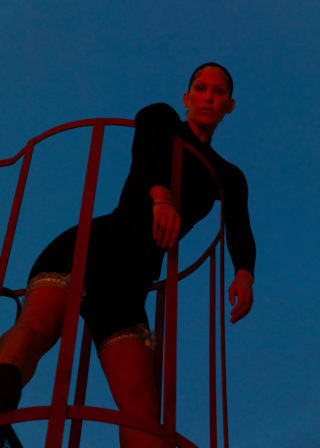 Beneath the mythological imagery and experimental sonics, Phoenix preaches a deeply relatable message of mankind’s ability to rebuild and thrive in the face of trauma, a fact further conveyed by the album’s subtitle, Flames Are Dew Upon My Skin, and by the words “Poetry” and “Warrior” which Eartheater has tattooed on each wrist. This universality is important to Drewchin. “These are simple ideas,” she insists. “They’re love songs and songs about breaking through to find your ultimate essence. These ideas are for everyone. Whereas I think in the past my intentions were different.

“The final track on the album is called ‘Faith Consuming Hope’ and I feel like that duality of faith and hope is interesting. Hope allows there to be space for doubt. Hope is giving into the fact that it might not work out, or it might not happen. But faith is the strength that is always there for you to access, even if you might not know how to get to it. Faith represents something bigger to me and beyond my lifetime. So when I sing, ‘I hope to die beyond hope’, it means that when I do die, I really hope I have that faith in me, and peace in my heart.”

For now, Drewchin’s focus is pushing the Eartheater project even further, including executing her vision for Phoenix live, a prospect that’s been sustaining her throughout this time of confinement. “When we go back to live shows it’s going to be a whole new thing,” she beams. “The type of magic in the air. People are so starved of connection and starved of those vibrations that they’re gonna honour it with every cell in their body. You know hunger is the best spice, and people are deeply hungry.” She adds with a laugh: “So yeah, maybe my mom was onto something making me fast all the time.”