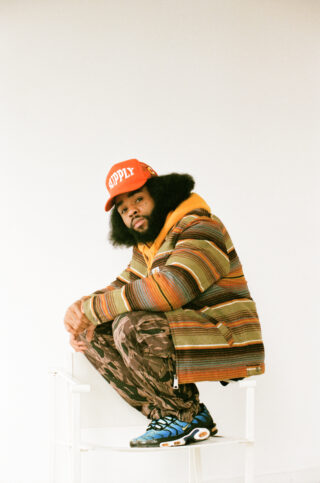 The Richmond, VA rapper is making big moves with his new album, FRANK

When we speak, Fly Anakin has just started his first solo UK tour and is staying in Peckham, gearing up for the next few days on the road. “London is very similar to New York,” he muses. “Seeing these places for the second time now is surreal but it’s very rewarding as well, because there’s a lot that I didn’t see on that first time. I feel like a veteran.”

The first time he came over was for a tour with Pink Siifu to tour their 2020 collaborative album FlySiifu’s, a fantastically expansive album set in a fictional record shop over which Fly Anakin and Pink Siifu preside. Skits and interludes punctuate the flow of tracks with humour and lightness, a peek into the synergy that flows between Fly and Siifu. The pandemic and subsequent lockdowns interrupted the duo’s plans to tour the album, so they managed to get across the pond at the tail end of 2021.

There’s a marked difference for Fly between this tour, which is promoting his debut studio album Frank, and the first one with Siifu: “The first tour was more people, and every night I had a chance to do solo stuff, and we also did FlySiifu stuff as well. I found a new comfort on stage, on tour. It was easy to joke around until the lightning captures itself in the bottle. I had a lot of space to learn on that tour – it felt more like research, and this feels like the actual job because I’ve got to close out every night. I guess I’m the main character this time. It was a little easier being the supporting cast, so that’s a shift but I’m enjoying it.”

Being, or becoming, the main character is slightly fraught with tension for Fly; he mentions that he always gets a little anxious before a show, but in relation to the album, he himself knows it’s not exactly where he wants to be yet. “It’s a good album, and I think it’s a great body of work and needs to be treated as such, but I also want it to be understood that it will be better. There’s always room for growth, but it’s a good representation of who I was at the time. I was, what, 25?” He reflects, “I’m about to be 28 this year, it’s a new world now. I got brand new ideas.”

So who was Fly at the time of making Frank? When we discuss it, he speaks in bigger metaphors; the album is called ‘Frank’ because that’s Fly’s real name. “I wasn’t always fond of my name,” he says, “but now it’s just me standing in my purpose and living my truth.” He recorded the album over three years, not with any particular grand narrative in mind except wanting to explicitly make an album, as all his previous work up to that point had been mixtapes and sketches. He consciously went into writing and sessions with the idea of giving songs more structure; the album is also crammed full of collaborations with people that Fly hadn’t previously worked with in a conscious effort to expand his working circle, from the Madlib-produced ‘No Dough’ which is full of warm samples fuzzed with vinyl dust, to the Nickelus F feature on the melancholy ‘Ghost’.

Looking at the album with hindsight, it’s ‘Poisonous Primates’, produced by Fly’s friend Foisey, that stands out as one of his favourites. Though the track is beneath two minutes in length, Fly’s flow on it is triumphant, tripping from one bar to the other easily. He calls for accountability on all sides with the words, “I need to tighten up and y’all do too”, tapping into the underlying message of the album as a whole. “Being that most of the songs were done so long ago, it’s hard to form a concept around it, cos it wasn’t formed in any kind of direction. So when I heard it all together, the only thing I could say was ‘Frank’, different shades of me, the true me.” 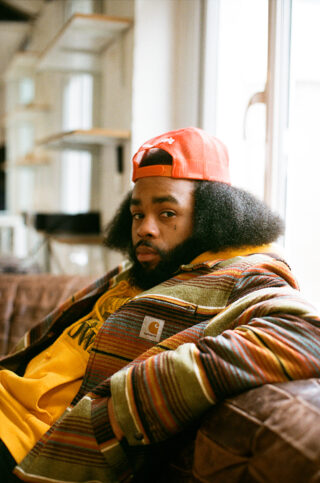 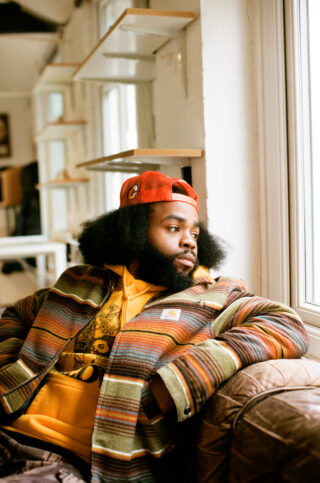 Fly attributes his comfort with the different shades of his musical persona to growing up in Richmond, Virginia. To any old Brit off the street, the US is one big amorphous blob of land with New York on one coast and LA on the other, and down south somewhere is probably Texas. Richmond is the state capital of Virginia, situated slightly further down the East coast and sitting awkwardly between the north and the south of the country. In July 2021, The United States Census Bureau estimated that 46.9% of Richmond’s population were Black, and that 23.2% of the city’s population were living in poverty, with Black people overrepresented within that statistic. Fly reflects on growing up in Richmond, saying, “I always saw music happening around me among the violence and all the other things, all the negativity. You get the bullshit, but you also get the music out of it.

“Richmond is top of the south and bottom of the north, so you don’t have an identity. There’s so many different kinds of people, so you’ll hear things in passing, so many different kinds of music from all different areas. There’s no identity, so it’s always leftfield. You never know what music they’re going to make. Half the time, the faces don’t match the sound cos they’ve been sitting in this melting pot their whole life. I also feel like it’s something in the water. It’s something in Richmond that makes people really good at music. I think it’s cos there’s really nothing to do but get in trouble so if you sit down to make music, you’re probably going to make something cool, cos everybody there that makes music is really unique in some kind of way.”

Because of how present music is in Richmond, Fly has vivid memories of albums coming into his life. “I have a terrible memory, but my stronger memories are linked to music,” he says. He remembers playing PS2 and his brother, who’s older than him by 13 years, playing albums like Ghostface Killah’s Ironman or Jay Z’s Reasonable Doubt. But Fly soon started honing his own tastes: “I’m a big Jeezy fan. When Thug Motivation came out, that was one of the albums I heard everywhere, I would hear it on every corner. So I got the album and found out my brother was a Jeezy fan too, but we didn’t talk about it until months later, but I was hip to that, you didn’t have to tell me about it,” he laughs. “Also when Kendrick Lamar first came around I put my brother on to him. The tables have definitely turned cos I know about things before he does. The kids are the A&Rs,” he jokes.

Having relocated to Atlanta since recording Frank, it’s the last album of Fly’s to be recorded fully in Richmond. “It’s the last of its kind in so many ways,” he muses. “I’ll never be based in my hometown to record an album unless I intentionally do that. I have to go to different places and establish a sense of being grounded, so my albums are going to sound different now that my circumstances are different.”

Reflecting on his own work with Frank and at the same time looking forward to his next project, Fly says, “With this album, I’m happy about it, I like it, I think it’s a great album and I think it’s going to make me a lot of new fans, but I also think my next album is already so much better. Nothing is real to me anymore. I always break my own record. It’s easy to disregard a whole album when you have better things going on, but I also feel like [Frank] is a great precursor for things to come. It’s the end of an era.” The end of an era or a breath between sentences, Frank is a strong statement of intention and identity, and signals big things ahead.