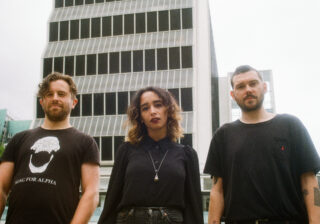 Between 1960 and 2010, the population of Gary, Indiana shrank by half. Today, despite the housing crisis 40km away in Chicago, it’s strewn with abandoned buildings, unwanted, untouched. Few groups are capturing the sound of such deterioration and malaise quite like a band from Manchester called Gary, Indiana.

At the time of writing, they’ve only got three singles out (the self-released ‘Berlin’ and ‘Pashto’, and ‘Nike of Samothrace’, with which they announced their signing to Brooklyn’s Fire Talk Records) but they’ve made an impact. Combining caustic noise with thunderous percussion and flickering sprechgesang vocals, the trio’s music doesn’t simply capture the surface aesthetics of post-industrial decay but expresses how it feels to live in a society that feeds, vulture-like, on that decay. This stuff is pressurised, disorientated, battered, occasionally beautiful, often gruelling. And really good.

We speak just before Christmas 2020, the UK still deep in its Covid-19 crisis. Gary, Indiana’s Parisian singer Valentine Caulfield is facing up to spending the holidays in Manchester.

“I’m not going home for Christmas for the first time in my entire life,” she says, sadly. “It’s been really stressful and quite weird. But [lockdown] has been quite productive for us.”

Caulfield first met her bandmate Scott Fair in 2016, when they were both playing in other bands. They were impressed with one another; slowly, what would become Gary, Indiana began to formulate.

“It started out just as me and Val writing together,” says Fair. “And we were lying in wait, until we were happy that we’d arrived at a place musically that we were excited to share with people. A lot of the early stuff was just figuring out a way to get to that place. We met at a gig in a place called Aatma, just off Stevenson Square in the Northern Quarter.”

“We kept in touch,” says Caulfield, “and when Scott was starting what is now Gary, Indiana he messaged me saying that he wanted a female vocalist who could speak French. I happen to be a female vocalist, and I speak French. We then spent quite a while refining what our songs actually are. It’s been a slow, interesting sonic journey.”

It sometimes feels like Manchester itself has been on a slow, interesting sonic journey in recent years. For many of the city’s rock bands at least, the shadow of Oasis, Stone Roses and Factory Records seems inescapable; for every innovator plugging away at something new in a Fallowfield basement, there are countless revivalist outfits. But there has been progress.

“Yeah, I don’t think the Oasis-worshipping sort of indie rock band in Manchester is ever gonna go away,” says Fair. “But now I think it’s much easier for people to engage with stuff that isn’t that. I’m really pleased with the way that people have started to embrace live music more, because of the collapse of the record industry. It’s great to see that people are willing to come out to smaller shows, buy a record, buy a t-shirt, whatever. It did feel like that went away for a while. Covid couldn’t have come at a worse time really.

“Up until the pandemic, the scene was very healthy,” he expands. “There’s a lot of people putting on their own shows, a lot of really good small promoters, and in the surrounding boroughs and towns there’s a lot of good stuff happening.” 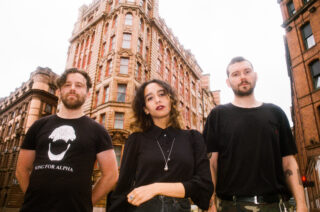 Fair’s words are spoken tentatively and anxiously, with reason. As the pandemic continues to suspend the music industry in limbo, the infrastructure that underpins DIY culture has never looked more vulnerable. In July, two of Manchester’s iconic small venues, the Deaf Institute and Gorilla, announced their permanent closure. To widespread relief, they were bought by new owners soon afterwards, securing their futures (for now). As ever with city-centre property developments though, there’s more to this story than meets the eye, as Caulfield is keen to point out.

“The thing is, they’ve been trying to sell it for ages. I’m not gonna go into a whole rant about them, but the people who run it own half of Manchester. They were clever to announce it just as lockdown was being lifted as being a consequence of Covid and everything, but they had been trying to unload Deaf Institute and Gorilla for ages.”

They’re an interesting pair in conversation. Fair is friendly and forthcoming, but chooses his words very carefully; Caulfield speaks less, but when she does, she’s a little sharper, happier to cut through the niceties with a pointed observation. That’s not unlike the role she plays on record – her vocals are used sparingly, with an unusual regard for timbre and rhythm taking precedent over clarity or catchiness. She’s not pushed to the front of the mix like a conventional pop frontperson; somehow, that commands one’s attention more acutely.

“I’ve done many different things,” she tells me of her vocal style. “I started with classical music, music school for 15 years, then I played in rock and punk bands. And I think the sound that we have at the moment takes from different sides of all of the things that I’ve done before. What I enjoy the most about playing in this band is that I get to do all of the things that I really enjoy. But yeah, it’s in-between singing and spoken word, some of it’s full-on shouting; I do a lot of heavy breathing. It’s quite exciting.”

Fair agrees. “I was really drawn to Val’s voice when I saw her perform. Certainly, from a Brit’s perspective, French language sounds very musical and poetic, and there’s something about juxtaposing the prettiness of that with very challenging noise music.” He’s not wrong: recent single ‘Nike of Samothrace’ sounds like Big Black wrestling with Einstürzende Neubaten, until Caulfield’s voice, artfully deadpan and distant, provides a completely unexpected focal point.

“I’d love to sing or perform in another language,” Fair continues, “because then for an English-speaking person, it’s less about lyrics and more about the sound of the voice and the sound of syllables and pronunciation. One thing that I really love that Val does is playing a lot with the rhythm of her voice, in parts where you might not have so much dynamism with pitch.”

Caulfield laughs. “I always really like people telling me that the French makes everything sound so nice – it allows me to speak absolute filth.” 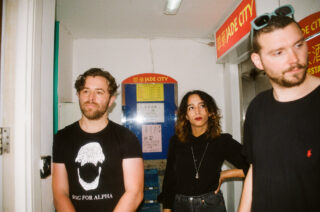 As the project began to take shape pre-pandemic, record releases and live shows beckoned, and the pair decided they needed a drummer.

“I started talking to this guy at a party,” says Fair. “We were talking about music all night; we liked a lot of the same obscure bands. I was like, ‘You seem like a well-connected guy. Do you know any good drummers?’”

He did, and introduced them to Liam Stewart, Lonelady’s touring drummer. He’s not able to join us today, so Fair takes the opportunity to sing his praises.

“Liam wasn’t the first. There were others. But we played Liam the demo, and the first time that we met him, at the end of that session, I was just like, ‘Oh, man, we need to play with this guy’. Because he’s really good.”

Their lineup thus complete, Gary, Indiana have big plans for their live show, whenever we’ll be allowed to see it. Self-confessed film nerd Fair lights up when describing the visual ideas they’ve been working with.

“It’s all self-produced – the videos, the artwork, the music. And there’s this VR set: Liam was like, ‘Right, I can get a 360-degree camera, let’s set it up with some lights in the rehearsal space and see how it looks.’ It’s all in black and white, and then it’s like you’re in the middle of our circle of play. We noticed after we’d filmed it that we were all very close to the camera, and we look like giants. I remember showing it to my friend and he’s just like, ‘As intimidating as the music is, the fact that you guys are probably ten feet tall makes it even more intense.’”

“Visual media has a big influence on us,” affirms Caulfield. “I did a lot of opera when I was young – I like the theatrical element of it.”

We wrap up soon, and return to our respective lockdown Christmases. For the next few days I have ‘Nike of Samothrace’ on repeat. The way it channels the claustrophobia and unknowability of life at the moment seems appropriate. It increasingly feels like Gary, Indiana, named after a city whose time has long passed, may have arrived perfectly at theirs.

Photography by Will Shields