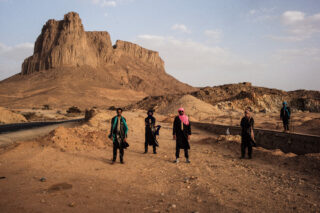 For over half a century, the Tuareg blues – a form of traditional guitar music and folk song specific to the Tamachek language of the historic Tuareg community of north-western Africa – has been in dialogue with Western forms. This might be British rock musicians in the 1970s magpieing Tuareg scales for new sounds, or this might be kids in early-’00s Algeria listening to bootleg Queens of the Stone Age albums and wondering if they could make their historic music sound a little more like this.

There is nothing wrong in itself with this kind of cultural exchange; more problematic is the way in which it tends to leave Tuareg musicians at the mercy of the music industry in the Global North. This means that, for generations, Western artists were benefitting from the ideas of Tuareg music whilst Tuareg musicians were unable to capitalise on those same sounds, left dependent on Western hierarchies and structures of music industry ownership. As sounds influenced by historic Tuareg music journeyed through the guitar work of Jimmy Page or the meditative stillism of Four Tet, Tuareg musicians faced problems from the political situation at home to indifference abroad and, even when able to release music in the West, were left lacking for serious creative and economic autonomy. The career of Tinariwen, who formed in Algeria in 1979, was a case in point – their initial success was affected heavily by political instability in the region throughout the 1980s, and it would only be through enduring into the 2000s that recognition (strictly along Western lines) was possible.

Now Imarhan, the Algerian five-piece who formed in 2006, have begun to alter this dynamic. The city of Tamanrasset, in the Ahaggar mountains, is the largest Tuareg settlement in the present day, in southern Algeria, near the border with Mali. The Tuareg have existed in the region since the fifth century, and it is these uniquely dry and dusty planes that shaped and inspired the distinctive Tuareg folk sound across generations. Describing Imarhan’s sound, bandleader Iyad Moussa Ben Abderahmane, aka Sadam, points to the celebration inherent in Tuareg music – often experienced across generations, through weddings and other family events – and the deep pain at what has happened to the region across the last century; the pain of colonisation, bloody independence struggles and widespread political failure in the region.

Imarhan are but one of a new generation of Tuareg musicians that have taken – and, importantly, have alchemised and altered – their traditional music to a global audience, including Terakaft, Tamikrist, Toumast, Bombino, Kel Assouf. Mdou Moctar’s Afrique Victime was one of the most critically-acclaimed records of 2021, adopting unconventional interpretations of heavily Tuareg-influenced motifs, whilst Khalab and M’berra Ensemble’s M’Berra record was celebrated for exploring more traditional, acoustic instrumentation and field recordings capturing the atmosphere of northern Mali. All that creativity, yet still not enough serious autonomy. Via the translation of the band’s tour manager, Sadam outlines how only the construction of a studio in the region could be the first step towards greater and more long lasting creative and business autonomy for Tuareg musicians. Aboogi, released earlier this year on City Slang, is the beginning of a new chapter and the landmark first recording from the studio built by Imarhan in their native Tamanrasset.

“We recorded the last two albums in Paris,” explains Sadam, “as we didn’t have any studio at home and we always wanted to record from home. Especially to avoid long and tiring travelling. So when we realised that we could get some help to build a studio, thanks to Africa Express, we started to work on this. We wanted a studio at home for us, but also for the use of the community of Tamanrasset. There is no recording studio in the region and it’s been very important to offer this to young people who can’t afford travelling or just generally recording with professional conditions.” More than this, Sadam also wants to collaborate with the increasing Western artist base energised by Tuareg music. “We’ve also been invited to record in studios around the world, and now it’s our turn. We want to invite international artists to our studio.”

Using only materials found in the local community, the five members of Imarhan all worked closely on the physically demanding task of building the studio from scratch, ensuring that the studio was particularly equipped to meet the recording needs of Tuareg musicians whilst being sufficiently high-end to attract visitors. They called the studio Aboogi, named after the first semi-permanent structures their nomadic forebears built when establishing settlements and villages.

“It was the best for us,” reflects Sadam, “to not travel to record, to record this music in its own environment, in our environment. We could feel the elements, the nature, the wind, the sun, even the heat and the atmosphere of Tamanrasset. We feel it has a very clear impact on the album, the biggest impact… it’s a real album from Tamanrasset, a true one.” 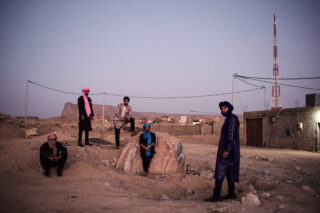 Yet Aboogi is not a landmark release for its back story alone – it’s a musical step forward too. Where Imarhan’s previous albums had used a sonic language more closely associated with guitar-based psychedelia, Aboogi returns closer to the original source material; sounds are more likely to be organic, with the arrangements of acoustic guitars and handclaps more closely evoking the landscape of Tamanrasset.

The construction of the studio would be just in time, it would turn out, to record a Tamanrasset local legend, the poet and guitarist Japonais. Japonais, or Mohamed Ag Itlale, was a former member of the Tinariwen collective and a personal friend of Imarhan. By the end of his life, Japonais was gifting songs to the band, passing on work that he feared he would not be able to record otherwise. Though plans were afoot for Imarhan to record a collaboration album in the new studio with Japonais, he passed away at the age of 61 in February 2021.

Of course, the construction of the Aboogi studio is only one solution. The frustrations of the Tuareg community in post-colonial South Algeria – with the money and political power still concentrated in the northern capital, Algiers – remain, and are expressed frequently on the new album. Its yearning closing track, ‘Adar Newlan’, discusses the struggles of Tamanrasset’s youth population; “The sons of my country are exhausted” sings Sadam, referencing the oppressive laws that imprison many young men in the region forced to work whilst struggling to survive. ‘Tindjatan’, with its insistent call-and-response refrain, is a folk tale of a great defeat suffered by a Tuareg community in the centuries before French colonisation, making specific reference to the imghad social class which was historically subservient to the aristocratic ruling warrior class. ‘Assossam’ is an incendiary reflection on the state of modern Tamanrasset. “There are no medicines, what’s the point of building towns?” asks Sadam. “The roads are all in ruins, the lands are all carved up.”

“That pain is part of our music – that we call Assouf,” explains Sadam. ‘Assouf’ roughly translates to loss, longing, homesickness, or a spiritual pain. “It’s the nostalgia, it’s about missing home. It’s very specifically from the desert, though, and it’s also about hope.”