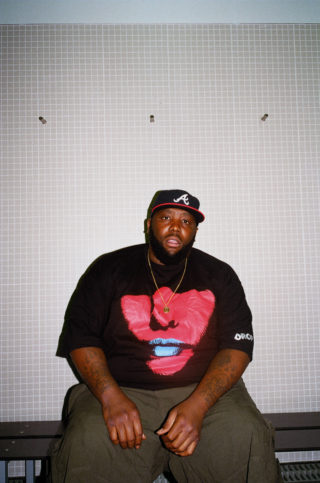 “Reagan was a lying, old, dementia-ridden motherfucker and his wife was pretty dizzy too”

Off the back of Killer Mike’s career high 2012 release ‘R.A.P. Music’ (R.A.P. standing for Rebellious African People), I find the Atlantan rapper in a cheerful mood just minutes before he takes to the Pitchfork stage. “This is my first time in Spain, so I’m a little nervous,” he confesses.

“The running joke in my crew is that I spent nine years becoming an overnight sensation!” he laughs heartily, as we discuss the album’s success. “I’m very happy to be at this stage in my career and have all these options open to me. I feel very blessed and very lucky.”

Mike has a decade-long career behind him, with longstanding and notable collaborations with Outkast and Big Boi playing figurative roles in his creative output (he features on the Grammy-award winning ‘The Whole World’), but the years of maturity building up to his success has suited him well. “Stuff that used to bother me as an artist when I was younger, doesn’t bother me any more. It’s a job. It’s the best job in the world, it’s a fun job, but it’s a job. It’s not about getting high before the job, it’s not about going up there inebriated, it’s about coming out and giving the best show and playing the best music you can and getting high and inebriated on your own time! But the younger me would be like, ‘I’m gonna get fucked up and go to the show!’.”

Killer Mike’s response to his surge of popularity is a simple one – give them what they want. “I spent a lot of years kind of being stepped on and ignored, so when people start watching they get greedy and they want more,” he says. “I want to just keep supplying now that there is a real appetite.”

The pinnacle to ‘R.A.P. Music’ is a raging, vitriolic assault on president Ronald Reagan. In the wake of Margaret Thatcher’s death, despite her instilling hatred amongst many musicians and artists, even the sternest of left-wing artists and media commentators danced around their words, picking carefully and hiding behind the ever re-appearing word ‘divisive’. Many seemed, not frightened, but reserved in their assault. On ‘Reagan’ Killer Mike utters the words that few did in the wake of Thatcher, as he spits “I’m glad Reagan’s dead!”.

“I did a show in January, and I’ve never been afraid on stage before but I was afraid on stage that night,” Mike tells me. “Now of course I knew historically who Thatcher was, but I didn’t know how the people felt about her was pretty much identical to the way people like me feel about Reagan. So, as I’m rapping about Reagan, this really tall guy just starts screaming, ‘Die, Maggie, die! Die, Maggie, die!’ and I’m like, ‘What the fuck?!’ I didn’t know what was happening, it spooked the shit out of me. So when we went home and then she died, my wife was like ‘you know ya’ll killed that white lady?!’. I definitely went and did my homework after that.” Mike laughs heartily and playfully, something that he does throughout our conversation, but when we begin to discuss the role of Reagan in his life, he becomes impassioned and stone-cold serious, spewing furiously, eloquently and extremely personally about the role that man had on his life.

“Ronald Reagan was essentially a conservative Jay Z, of sorts. I’m not saying Jay Z is Reagan, but what I’m saying is, if you want to sell something to black people right now at this moment, put Jay Z on the screen. Ronald Reagan was that at one point. He sold things, he was a salesman and the Republican Party were smart enough to bring him in and use him as a salesman to sell agendas. What happened was that he became the face of bullshit agendas and had an evil economic policy, and more evil than that he became part of a conspiracy that gave weapons to people that didn’t deserve them and brought cocaine into the streets of America, and he helped not only destroy the fabric of America but directly my neighbourhood.” Mike fiercely pounds his chest. “Cocaine and crack-cocaine and the sentences you got for that destroyed black families and locked up poor African-American families,” he says. “I saw my community crumble under what he was doing, I saw my community become a wasteland and I took it personally.

“One year, when I was in the sixth-grade I was getting told by officer friendly about avoiding being kidnapped and the next year he was kicking our ass like we were villains, but we were still children,” he says, saddened and angry. “It was because the perception had become: we were the dealers, we were the scourge, but we weren’t Oliver North, we didn’t facilitate bringing in crack-cocaine into the country, we didn’t use military planes to do that, we weren’t the CIA turning our eye so that contras could continue a killing campaign in Nicaragua. All of that was him and my thing is this: if a salesman was used to sell it then I am going to point at the salesman and say, ‘you are the fucking devil’. I have no qualms about saying I’m glad Reagan’s dead because I’m not just talking about the human being – who was old as fuck by the way, he lived older than he deserved to be – it’s about the ideology of Reagan.

“The first verse of the track doesn’t even mention Reagan, it talks about us as rappers allowing ourselves to be prostituted by corporations to sell bullshit to children. We exploit the youth, we introduce them to the gang; we do that. We as rappers, and I have to accept my culpability and my responsibility as a part of that.”

“Like, it’s cool to be 21, 22, and a member of the Republican Party and talk about Reagan like he was a great lion? No! He was a lying, old, dementia-ridden motherfucker and his wife was pretty dizzy too, to say ‘just say no to drugs’ when there is high unemployment due to his economic policy. American trade became shit under him and all of a sudden you’re telling masses of groups of unemployed, poor people who need to feed themselves, ‘don’t sell or don’t do drugs’ – it was hypocritical and it was evil. I’m very glad Reagan is dead, I should throw a barbeque every year to celebrate his death but I’ve only done it once so far”

Mike opens up further, “My father was a black police officer and I’m from a city where right now the chief of police and the mayor were young black officers back then – these people were forced to lock up young black boys: five grams of crack got you the same time as five-hundred grams of cocaine. Now I mean, you have to do your job, you have to lock up a criminal, but you’re locking up a 19 year old boy, a 16, 17 year-old boy and sending these young men to jail for 20-30 years and my father hated it, he ended up leaving the force. I don’t know many black police officers who are sympathetic to that kind of policy, because non-violent drug offenses do not merit the kind of sentences they got. We have rapists, child molesters and murderers who get less time than non-violent drug offenders.”

We then talk about stand-up comic George Carlin and how, essentially, he too is a rapper, and the “piss and vinegar” of Bill Hicks that Mike so dearly loves. He then condemns materialism, bragging and flippancy in modern hip-hop and then we part ways and Mike takes to the stage before I can even get into the crowd. He then performs with all the impassioned, spiteful yet earnest energy that he just exuded throughout our conversation. The word of hip-hop and music needs Killer Mike.