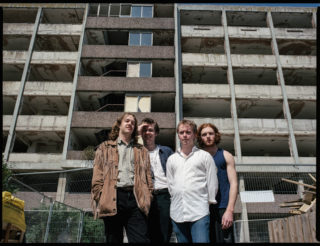 It started with an advert: 'Guitarist and drummer looking for singer willing to do and say horrible shit'

Alistair is late. The lead singer of LICE, the Bristol band starting to make a name for themselves on the national stage – opening for The Fall and Fat White Family – finished his university finals the night before our interview, and he is nowhere to be seen. Fortunately for Alistair, I have brought my recently adopted dog, Edna, to Bristol with me and she keeps the rest of the band occupied for forty-five minutes, before we all begin to really worry. Alistair is still not here and neither he nor any of his housemates are answering phones or Facebook messages.

“I’m sorry about this,” Silas, LICE’s guitarist and founder member, says as he, I, Edna, the photographer and the other, present, band members (bassist Gareth and drummer Bruce) shuffle around the city in search of a photo-shoot location. “Alistair is a bit of a liability.”

“Will he turn up?” I ask, concerned that a photo-shoot sans lead singer might not result in the most spectacular feature.

“And watch out,” Silas says. “Because he’ll try and charm you. He’s so charming; it’s actually ridiculous. He works people really well. He’ll probably kiss your neck or something. He’s done that before. Sometimes we wonder whether he might actually be a psychopath.” 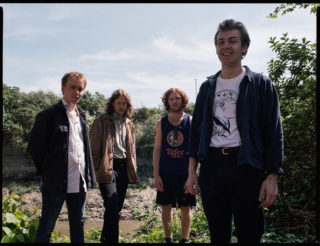 True to their word, Alistair pulls up in a taxi twenty minutes before Dan, the photographer, is scheduled to leave. Wearing a crisp white shirt and looking like a slightly crumpled, overfed Draco Malfoy – bearing the effects of what he describes as “two sleepless nights” – he steps out of the car, shakes my hand and apologises profusely. “I’m a big fan of your publication,” he says as the other boys roll their eyes behind him.

Wayward band members are something of a defining feature for LICE. Their first drummer, Isaac, left the group after a microdosing experiment went terribly wrong.

“He used to try microdosing ‘shrooms,” Silas tells me. “But he fucked it up and was just high constantly. And he’d come into practice with playing cards and he’d, like, hand them out to us. It was weird.”

“Yeah,” Gareth says. “He’d throw them around the room. And he had designs for railguns and stuff.”

“What even is a railgun?” Asks Alistair. “He showed me a lot of diagrams but never actually explained.”

“It’s a piece of heavy artillery.”

“And he had a tag, which was LICE in Japanese, and he’d go around until 5am spraying it. Anyway, he left us because he was off the chain and we got Bruce who’s far better and it all worked out great.”

“I feel like Bruce kind of made us a band,” Alistair cuts in. “Because we were as loose as shit and now we have this undercurrent, like a semblance of rhythm.” 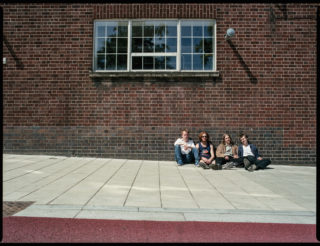 LICE began life as Silas’s side-hustle. Having performed in a few cover bands at school he arrived at university “just really wanting to get a band together.”

“A friend of mine called Henry knew I was into stuff like The Birthday Party and wanted to do an official kind of band, so we started jamming in his room with a few guys. After a couple of practices that fell apart a bit, but Isaac and I kept playing together in my room in second year, to my housemates dismay because it was a) really bad, and b) I just had a really shit drum kit and an amp. So me and Isaac used to jam in there for hours. Eventually we were like: ‘we should get a singer and a bassist or just stop.’ So I wrote a really bad advert and he replied to it,” he gestures towards Gareth, then Alistair. “And so did he.”

“It was on the University of Bristol’s music society Facebook page,” Alistair says. “And it was: ‘Guitarist and drummer looking for singer willing to do and say horrible shit.’”

“I listed a lot of bands, which at the time I don’t think you knew.”
“I knew Fat White Family and that was it.”
Silas turns to me. “It was just classic post-punk bands, The Birthday Party, The Fall, Pop Group, Bauhaus – all those touchstones.”

Alistair nods. “I kind of felt… like definitely we knew The Fall and that was pretty much it, basically. Every other band – The Birthday Party, Psychic TV – Silas got us into them. He was like the impetus.”

Unsurprisingly, considering their musical influences, LICE have a classic post-punk sound, although they’re uncomfortable with the punk/post-punk label that is often applied to their music.

“[Punk] was a word that was created to describe a particular era of music,” Silas explains, “and other words have got tagged onto the front of it, like pop-punk, which is really just despicable – it’s reused and glamorised for all the wrong reasons. When new bands get labelled punk bands I just think there must be another word for it. Like we get labelled post-punk and again that was a very specific time, post punk music. And admittedly we sound like bands like that, but it’s not the same.” 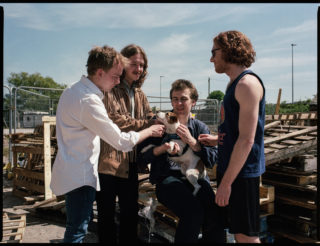 LICE’s method of writing is a little unconventional, especially Alistair’s approach towards lyrics, which, he explains, was borne out of the writers’ block he experienced when he first joined the band.

“What I do isn’t really melody based,” he says. “It’s more about kind of, like, rhythm. So originally, in the early days, I didn’t really know what I wanted to write about; I didn’t really have any ideas for lyrics. I’d try writing lyrics and they were always fucking terrible. Like these guys said they were good, but they didn’t fit properly. And so for a long time I was so discouraged. I’d turn up to practices and wouldn’t want to be like, ‘sorry I don’t have any lyrics’ – I didn’t want them to find out – so I’d hold the microphone dead close to my mouth and just slur and make phonetic sounds, and add loads of reverb and stuff because there was a mixer in the practice room. And these guys didn’t know.

“I’d always record on my phone and afterwards these guys were like, ‘Oh I couldn’t really hear what you were saying but it sounds good man.’ I’d get back home and literally just have noted down in dots and dashes where to put the syllables and stuff. So I’d be like, ok, if that line has seven syllables and I add the stress there and there, it doesn’t really matter what I say. As long as it fits in there it’ll sound good. I was really, really into the Teasers and I wanted to have a go at writing satirical stuff, so after months of not having lyrics for this song I wrote the lyrics in half an hour. And ever since then that’s basically been it. These guys play a song, I record it in practice, go home, work it out, come back.”

It’s an approach that appears to be working. Their first single, ‘Human Parasite’, received airtime on Radio 1 after its release on new label Big Score and was described by the music blog Vapour Trail as “one of the most exciting things to happen in the history of Western art.” (“And we don’t even think he was taking the piss! He fucking loves our song.”)

“What I’ve learned is that you can spend months honing a song in your bedroom and think it’s perfect, and you release it and no one will listen to it,” Silas shrugs. “But if you know people who know people it’ll get played on Radio 1 and it’s fucking awesome. And you kind of think it’s amazing but do I deserve this?”

After graduating university in a month or so, the LICE boys plan to spend a year working on music. They’re touring the festival circuit this summer and then they’ll be gigging and writing, although they are circumspect about making any big plans. “We’re gonna try and do the band basically. I didn’t think we’d even play a gig or write a song, so it’s a constant surprise that anyone wants to come and see us.”

After our interview, Silas, Bruce and Gareth will head home to revise for their final exams, and Alistair, I presume, will sleep off the remainder of his hangover. “Anything else?” I ask, draining the dregs of my drink before we leave. Gareth smiles, lifting my dog from his lap. “Yeah,” he says. “Shout out to Edna for keeping spirits up today.” 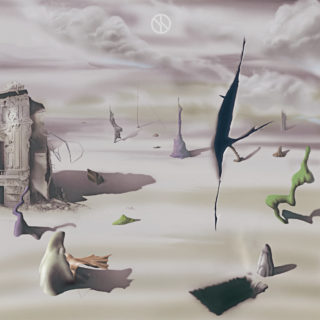