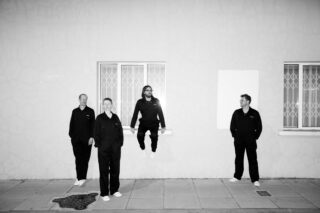 Dog Unit are in their respective homes. It’s a Monday evening in early spring, and around half the band are suffering from lingering remnants of Covid. We’re on Zoom to be safe. Hovering up on top above a headset-donning James Weaver, the bassist, and guitar/omnichord player Sam Walton, are guitarist Henry Scowcroft, and drummer Lucy Jamieson. Even via this strange, clunky conversational medium, with its risk of sound clashes and internet freeze-ups running rife, the band’s familial dynamic is on ready display. Sam and James are constantly cracking gags and silly one-liners, with Lucy and Henry adding more poker-faced, dry-witted quips to the mix. Amongst the insubordinate cheekiness, the chat has equal amounts of considered discussion, and thoughtful collective reassurance running through it. The balance of all three makes for a kind of easy, conversational fluidity that’s not so dissimilar from Dog Unit’s creative structure: non-hierarchical, leaderless. They make it clear they prefer to be received as a unit.

Since forming in around late 2017, Dog Unit have casually played by their own rules, no design or blueprint in sight. With their respective earlier music projects petering out and each of them approaching their late 30s, holding down real, professional, grown-up jobs, serious relationships and families, the group decided to get together one “miserable” (James), “dark and horrible afternoon, rain pissing down outside” (Sam). The simple aim when they all turned up at the studio in north London, was simply to play. It was a textbook noodling session.

I ask if they began taking things seriously from that very first session.

About four months later, a second noodling session was arranged, this time with Henry’s tape recorder in the room. It was playing the recording after the session to a friend which meant Henry accidentally got the band roped into playing a charity festival. “That’s when we were like… oh God,” Henry admits. “We’ve got to have a name, and tracks and stuff. That’s when it became real.”

Skip forward to their first release, 2020 EP Barking to Gospel, a project which saw the band beginning to realise the broad possibilities of instrumental rock, with playful and adventurous sounds, spanning a broad range of sonic impulses. ‘Dog Unit’, with its explosions of soloing, dark clouds of feedback, at times becomes an almost metal-inflected noise track, full of precision drumming. It sits in pleasing contrast to the repeating, gentle cycles and rituals of guitar and omnichord of ‘Lab Coats’, a track that sleepwalks and veers towards gloom and menace.

Self-released, the record was mixed by a very talented old friend of the band, Four Tet, and mastered at Portishead and BEAK> man Geoff Barrow’s Invada Studios in Bristol. Recording semi-live, the band took a modular approach to putting the tracks together.

“We’d play for half an hour,” Sam explains, “and we’ll have a big stack of stuff, and we’d all chop it up, quilt it together, in the same way that in a dance record, you’ll have blocks of sound that come together.” It’s a method that helped to refine their ear for arrangement.

These themes, of compromise, collaboration and power sharing, pop up often during our conversation about their newly released EP Turn Right and Right Again. Recorded and engineered in April 2021, after numerous lockdown-induced delays, by Audiobooks’ David Wrench (who work with an incredible list of artists including Frank Ocean, David Byrne, FKA Twigs), and mixed again by Four Tet, the sound continues the thread of Barking to Gospel, retaining its broad range of sonic influences and approaches. Yet it’s far more psychedelic than the previous EP, recalling such forebears as Cymande and On The Corner-era Miles Davis; there’s a gentle, cathartic approach to the circulation of guitar riffs floating away and back again, a la The Durutti Column.

There’s a feeling of sonic intimacy on this record, which, with skilful engineering, can come with the territory of being recorded semi-live. You can hear it in the gradual falling away of guitar riffs on the EP’s final track, ‘Turn Right and Right Again’, when you’re left with the solitary sounds of Lucy’s drumming, her hits so light and fast, the sound so sharp, that it recalls the tones of a wind-chime.

It’s this naturalistic approach, Lucy highlights, that allows the listener to hear the humanity in a recording, with its audible imperfections. “The thing I like about other bands recording live is the things you can hear,” she says. “The things you know are mistakes, or when you can hear a song when the drumsticks are put down, and you know the song is being finished. And you can kind of picture that.” 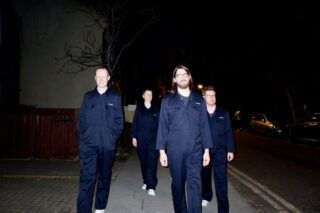 With Turn Right and Right Again, much like some of the best instrumental bands, Dog Unit have made another release that has driven music journalists to confusion. There’s a curious constant most press coverage has focused on in reviews of Dog Unit’s works: the absence of lyrics, rather than the presence of, well, everything else. Given that the band have always been a purely instrumental outfit, it’s a strange angle.

This very magazine called the new EP a “Wordless Rock™ delight”, whilst whynow highlighted that despite their music having no vocals, it was still very good. While it doesn’t annoy the band, when I ask about it, my question triggers an animated discussion on the expressiveness and poeticism that can come with instrumental music.

“The fact that people pick it out as a sort of lack, as a band without lyrics, wordless, lyric-less, rather than mentioning instrumental – there’s a double-edged compliment there,” Lucy says, “It’s ‘good’ despite not having words. But there isn’t a lack there – there isn’t for us playing.”

“I was just thinking about this the other day,” James chips in, “because we’re a traditional band set-up, [but] without someone at the front, we get this comment all the time. We’re not doing moody, long-winded soundscapes, like some other instrumental music – we’re relatively concise. We’re doing pop music in some respects, we’ve got some pop structures, so people maybe anticipate words to be in there.”

Sam is keen to rationalise this impulse. “There’s a sense, when you have pop music, lyrics and singing, even wordless singing, it gives you something to hang on to. There’s an inherent, direct link to some sort of humanity there, that’s far easier to compute.” Throughout our conversation, it’s these kinds of thoughtful asides that highlight who the band really are – self-proclaimed music nerds. They’re people who are entrenched in a deep love of music, each with their own background in other musical outfits, which they’ve been passionately pursuing alongside jobs and families for years. There’s no ego here. It’s all for the sheer love of making music. Anything beyond noodling and playing in front of an audience, they seem to take as a stroke of luck.

It’s evident too in the serious levels of excitement and incredulity in their voices when they reflect on being able to get such towering figures to work on their “little EP”. Having someone like Four Tet mix their tracks was “MAD!”, according to James. It’s also clear in their reverence for David Wrench’s skills as an engineer, and what he brought out in them.

“He’s just got this tenacity and personality. Not to diminish his ear, which is insane,” Sam explains. “But I think his skill is in generating this real atmosphere in the room. In the same way that the art of interviewing someone isn’t about having a big vocabulary, it’s about getting responses out of people, the art of production is in getting the right recordings out of us.”

As Dog Unit prepare to set out on their first UK tour, having only played six gigs over the course of the past three years, I ask how it feels to have that in their sights, setting off in a van to gig across the country, with everything else they have going on.

“There’s no avoiding the fact that we’re not a bunch of 19 or 20-year-olds, who can devote our whole lives to it,” Sam affirms. “That’s the nice thing about doing it, I think, because there isn’t that pressure. We can do it for the joy of it, actually.”

“This is the cool thing about being in Dog Unit,” Henry smiles. “Like we said right at the beginning, we started this kind of as a laugh. And people like it!” It may be a surprise to them, but not to anyone else.

“I think the next thing we want to do is to make an album,” James says, looking to the future modestly. “We’ve got the material, pretty much. It’s just finding the time to record it.” 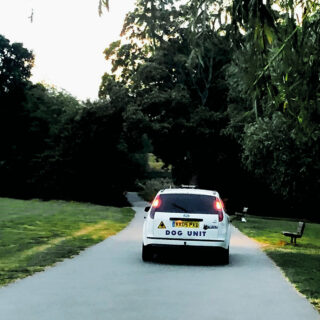 London quartet Dog Unit are proving that words are overrated 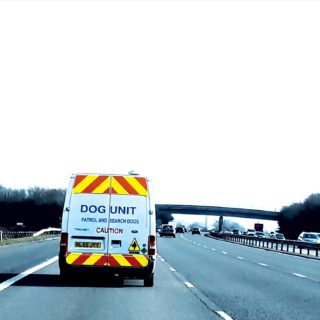