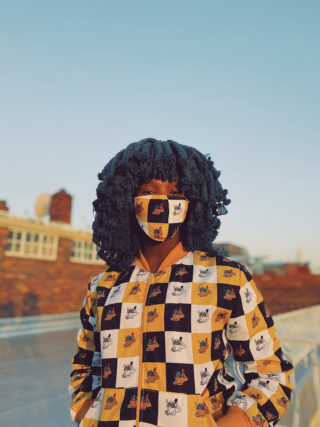 "Without thinking about it, I'm literally becoming the person I wish I had to turn to when I was younger”

Of all the intimate rites of passage you probably wouldn’t want publicly immortalised shortly after, losing your virginity must be number one with a bullet. In fact, I’d go as far to bet most people would rather forget the entire anti-climactic ordeal immediately. Not so the then-teenage Sanelisiwe Twisha – now Moonchild Sanelly – who channeled these first fumblings into a poem that she performed before an audience in her hometown of Port Elizabeth, in the Eastern Cape.

“It was called ‘Cloud 9’,” the singer/rapper grins beneath a shock of cobalt braids, speaking from the sofa of her Johannesburg apartment. “And from there I just kept on because I started noticing that, in poetry, girls weren’t assertive about sex. I didn’t like that narrative where women were passive and boys were powerful, because I don’t believe it. And also coming from a space where I’d been [sexually assaulted] before, it didn’t feel good for me to just cry and be a victim, so always I’d write about how I was going out to infect boys with my virus. And everyone would cringe. And I loved that.”

Now 32, Sanelly has lost none of her power to provoke, and has long been notorious in South Africa for her forthright attitude towards sex and female empowerment. When I ask if she’s out to stir controversy or simply to normalise such discussions, she laughs, “I’m out to be open about my experiences and what I believe in, and I just happen to be shocking.”

Her forthcoming EP Bashiri – set to be released in September via Transgressive – should elicit plenty of double takes. Sung in Xhosa, ‘Weh Mameh’ sets sex positivity to pounding beats, while the self-styled “future ghetto funk” of ‘Boys and Girls’ is a celebration of sexual fluidity. ‘F-Boyz’ finds Sanelly asserting her power over an irresistible amapiano groove. And then there’s ‘Where De Dee Kat?’, a glorious gqom/trap hybrid that more than delivers on the phonetic innuendo of its title, featuring Sanelly demanding, “Get it up man,” over the distant chant of “Penis, Penis, Penis.” It all feels doubly brave considering that only this year she was censored for much less.

‘Askies’ – her collaboration with Joburg dance outfit JazziDisciples – was pulled from South African radio in March due to its alleged explicit content, a decision Sanelly still vehemently disputes. “The song wasn’t derogatory in any way,” she exclaims, visibly fuming. “I used the words from the dictionary in Xhosa; words like thighs, boobs, bum. Had it been done in English they wouldn’t have [censored it].” Defiant, Sanelly responded by starting the #thunderthighschallenge hashtag on TikTok and Instagram to promote the song’s message of body positivity. To her delight, she’s since received hundreds of videos from women and men of all shapes and sizes, dancing to the track and celebrating their own bodies.

“That song was aimed at making people feel good, because you always have these unrealistic standards that we have to fulfil and reach,” she explains, the words gushing out at approximately 100mph. “Maybe [the song was censored] because they’re not gonna be able to sell diet products if people feel good about themselves? Because a lot of markets definitely thrive on us having negative perspectives of ourselves. 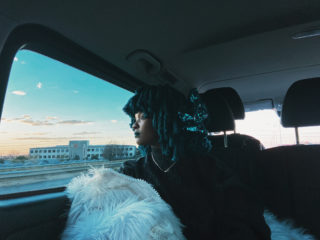 As the mother of an 11 year-old, and seven-year-old twins, setting a positive example is clearly hugely important to Sanelly, and she does so by being authentically herself in the face of hypocrisy. On ‘Bashiri’ – the title track of the new EP – she attacks false prophets with a narrative sung from the perspective of a woman whose husband has been unfaithful. The song critiques a pastor figure who promises to repair the marriage by performing a miracle. When I ask Sanelly where she found inspiration for the song she guffaws, “Experience, girl!”.

“Let me tell you something! So my twins’ baby daddy is a staunch Christian and his mother-in-law doesn’t like me, because mother-in-laws generally do not like me because of my expression and how I’ve looked and whatever. So she brought this prophet from Zimbabwe to shower me in holy water to kick out the demon, and I’m like, ‘What demon?!’ And he was like, ‘You’re not going to get married because you’ve got a demon inside you, and it makes you wild.’ And I’m like, ‘Girl, look! I’m just Xhosa, and Xhosa people are actually very vocal in general.’”

Sanelly has often come under fire for this combination of confidence and determination. She recalls a specific incident at the beginning of her career, while recording at Red Bull Studios in Cape Town, back in 2013. “There was this white girl there who came to me and said, ‘You know what, your image makes me so confused, because you want everything. You’re here, you’re there, you’re everywhere, and because you’re black you’re probably going to make it before me’. And I was like, ‘What did you say?! Is my drive offensive to you? You’re going to fault me for being ambitious when I’m being given this opportunity to go further? No!’ And actually, I’m here now and she’s not.”

She faced similar resistance while working on EGOLI as part of Damon Albarn’s Africa Express collective, too, back in 2018. “I was like a kid in a candy store, because I love writing to anything and everything, and I love challenges. So I literally could hop into this studio where they were doing this genre and write a song, and then hop into another studio where they were doing a different genre and write a song. Sometimes songs would be complete, but I would come in, write my part and they’d have to remove somebody.

“Some people stopped talking to me after that because they said it felt like ‘Damon Albarn Featuring Moonchild and Various Artists’. And I’m like, but we had the same 24 hours! Don’t fault my hunger and my drive! You think I’m just going to make one song when I’ve got a full day [in the studio]? Never.”

Despite the jealous sniping from some quarters, Sanelly looks back on Africa Express as a wholly positive experience, not just because it introduced her to future collaborators – including Ghetts, who invited her to sing on his recent single ‘Mozambique’ – but because it helped widen her international audience. As a result, she was invited by Beyoncé to appear on her soundtrack for The Lion King live action remake, starring on ‘My Power’ alongside Tierra Whack.

Thanks to the wonders of NDAs, Sanelly is frustratingly tight-lipped about the experience today, and about her involvement in Beyoncé’s forthcoming visual album Black Is King, which has been trailed with ‘My Power’ as its theme. But she beams at any mention of the R&B legend, explaining, “I had her in my ten-year plan, written down as one of my ultimate collaborations.” Who else was on the list, I ask. “I wrote down Diplo, I wrote down Damon Albarn, and I wrote down Beyoncé. Those are my three ultimates in life. And I’ve gotten all three.”

When pressed about future collaborators, Sanelly cites Megan Thee Stallion, Cardi B, Pharrell, Doja Cat and Da Baby as being top of her wishlist. She tells me that last night she actually dreamt about meeting Pharrell, laughing, “So I know what I’m going to say now because I’ve already said it in the dream. I believe so much in the things I want to happen, and I know when I meet him I will feel like it’s happened before, because it’s already happened in my mind.”

Following the release of Bashiri, there are plans to re-issue her 2015 debut Rabulapha!, and she’s already begun work on the follow-up, which will feature contributions from Diplo and DJ Lunatic, and consolidate her love of ghom, amapiano and future ghetto funk with the myriad influences she’s absorbed travelling the world. “I mean, it’s going to be amazing,” she says with trademark enthusiasm. “I’m going for the Grammys. I want a Grammy. It’s going to be lit.” 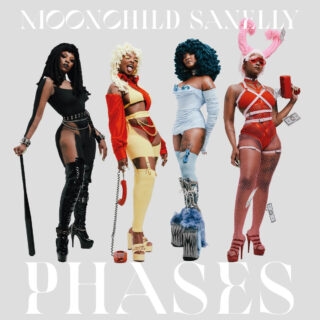 There's a great album by Moonchild Sanelly here, but it'd benefit from an editor