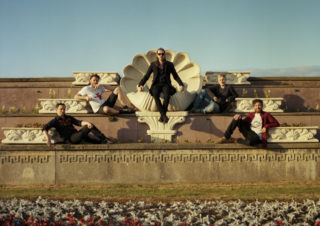 Screaming your lungs out is healthy for the mind

One Sunday afternoon last April, I wandered the dark corners of Camden basement venue Underworld, numb underfoot and bleary of mind. I was mid-way through the final day of riff mecca Desertfest and, frankly, fit for fuck all. As I coveted the cloister of my bed, unslept in, one billion miles away in Belfast, Pigs Pigs Pigs Pigs Pigs Pigs Pigs strolled out on stage. Led by Matt Baty, a caterwauling knight in shining armour (1990s Newcastle United shorts) they inexplicably drove out my pining for home in sixty face-searing minutes.

Nineteen months on and Pigsx7 could, if they so wished, lay claim to being the UK’s perennial sludge-doom band. A jewel in the glistening crown of the North East’s underground scene, their newly-released second album, ‘King of Cowards’, is a skull-rattling triumph of down-tuned maximalism and a feature-length flare lit by one of the very few bands to have made a dent in my solar plexus.

Having written and recorded their 2017 full-length debut, ‘Feed the Rats’, in their hometown of Newcastle, the seeds of its follow-up were sown in much less familiar climes. “We had a couple of gigs in Italy that, for whatever reason, fell through on a tour,” reveals Baty to me. “So instead of cancelling the tour, we holed up in a converted barn in the country to write. There was nothing for miles. I think the closest village was, like, a twenty-minute drive away.”

“It was a lot more relaxed this time around,” says guitarist Adam Ian Sykes. “And more enjoyable to being in a cramped bathroom in Newcastle.”

“Yeah,” says Baty. “It was nice being somewhere completely isolated from your day-to-day life. That kind of isolation that you can only get in the countryside helped.”

No matter how much you strain your ear or tilt your head, listening to ‘King of Cowards’ isn’t likely to transport you to some pastoral Italian backdrop. And it’s all the better for it. As with its predecessor, it’s a ripping blitzkrieg, bounding with doomed-out riffs and Baty’s Kilmisterian howl. From the riff-fuelled bombast of ‘A66’ to the album’s closing highlight, ‘Gloamer’, it makes for a forty-minute exhibition in pure, lysergic-dappled low-end.

With their fortuitous songwriting retreat proving successful, the band returned to Newcastle’s Blank Studios to commit their new record to tape earlier in 2018. Ten years on from being initially set up as a mobile initiative by the band’s guitarist, Sam Grant, the band were one of the first acts to record in the studio’s new premises. “It was nice for Sam to have a bit of extra time and freedom to play around with the space,” says Baty. “It made things a lot easier, from our side of things. It was going from the old studio, which was incredible but quite small. We learned to work in that space really well and make the most of what we had got. All the output was great but with the new space, there was a lot more focus on just getting it down, getting it right and enjoying it.”

‘King of Cowards’ coup de grâce is immediate and assured: just how accurately it distils the band’s incendiary live show. Where the scuzzed-out psych-doom ambushes of ‘Feed the Rats’ carried with them a certain condensed, lo-fi charm, the likes of ‘Thumbsucker’ and ‘Cake of Light’ on album number number two are widescreen and cohesive. It’s curious, then, to discover the band were a little apprehensive before stepping into Blank Studios this time around. “We were a bit worried,” reveals Sykes. “With ‘Feed the Rats’, we had been playing most of it for about four years before we recorded it. So that made it super easy when we went into the studio. With this album we didn’t have that luxury. Although we had everything written, around 75% of the album we hadn’t played live before. In the end, it was almost like we had played them live and it felt just as easy as the first album to record.” 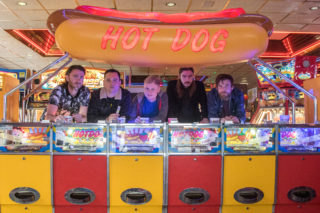 Without a shadow of a doubt, at the epicentre of Pigsx7’s seismic craft remains Baty’s larynx-tattering bawl. Although they’re not always legible, from where do his rabid words stem? “I don’t sit down with a pen and paper,” he tells me. “When we’re forming songs I tend to shout indecipherable things along to what the guys are working on. Lyrics sort of gradually form themselves. In the first instance, I much prefer to go with the flow with whatever everyone else is doing. In Italy, it was mostly just a case of me shouting indecipherable things to begin with.”

Seeing as his words slowly emerge over time, snowballing from subconscious flickers into something much more substantial, it’s no shock to learn that Baty’s upbringing makes an impression on ‘King of Cowards’. “I went to a Catholic primary school, and then a Catholic secondary school,” he says. “From the very get-go, when I was four or five years old, it was heavy on the religious side of things and really top-heavy on Catholicism. ‘There is a Heaven and Hell; whenever you pass over to the next life, you will be judge. So here are your guidelines for living a wholesome life. If you break any of these rules, this is what’s going to happen.’ They’re pretty heavy subjects for a really young person to take in, especially when you’re at the age where you’re learning a lot about life, from every angle, and trying to work things out. But then you’re sat down at a school and told these things – it’s very, very challenging. I do wonder, in my adult life, how much of that has affected me, you know?”

Though it flirts with reductionism too much to outright call it cathartic, it would be foolish to shirk that particular descriptor in relation to the band’s crushing sorcery. I say that presumably Baty finds relief in wielding his thunderous primal screams? “It’s definitely beneficial,” he says. “Like all forms of vocalisation, it’s beneficial, whether it’s talking, shouting or singing. Especially singing. I don’t know what kind of science there is behind it, but I’m a firm believer that projecting your voice in such a way has all kinds of benefits for your mind. I wish I knew of any studies to back it up and I suppose I can only use myself as a case study, but it makes you feel good. Certainly, the physicality of it does have benefits.”

Physicality is a defining element of what sets Pigsx7’s live show apart from so many acts of their ilk. “It’s a rare calm in my head, coming off-stage,” says Sykes, “unless it’s a really bad gig, which is few and far between, frankly.”

“Yeah,” says Baty, “I would have to agree with that. For me, I rarely go back and listen to the music that we’ve recorded, mainly because it doesn’t give me the same thrill as it does performing it. I feel like I can’t reach that kind of high listening back to it. I think that says a lot.”

Off the back of two launch shows for ‘King of Cowards’ (one in Newcastle and one in London) the band are set to zig-zag across Europe in November. When I ask them how they prep for these bigger jaunts beyond the UK, Baty says: “We’ve got some pretty sweet spreadsheets. I suppose there’s a certain element now whereby if we’re going to be so busy over the next while there has to be a lot more forward planning. We just have to think a bit more carefully about making things work. There’s always going to be work commitments, and family commitments, but we’ve always found a way to keep pushing forward.”

“We’ve been very lucky to get funding for ‘King of Cowards’ from PRS,” says Sykes. “We’re just aware of how much that helped our situation. There are a lot of bands in a similar position to us where that would really help. It’s an option people should be looking at.”

And how, I ask, is it having to deal with people who struggle with the perfect fact that they’re go by the name Pigs Pigs Pigs Pigs Pigs Pigs Pigs? “It’s fine,” says Baty. “We don’t have to deal with them. Seriously, though, funny story: I work for a music publisher, and it’s quite handy that we publish Pigs; the last album and this album. I recently got one person who completely put their foot in it and replied to my e-mail saying that’s a ridiculous name, I just can’t bring myself to listen to the music. And I replied saying, ‘This is… this is my band.’ He made a few backtracks after that. But it’s fine. If anything, if people can’t get it or understand it or see the pleasure in that name, I don’t want to know them!” 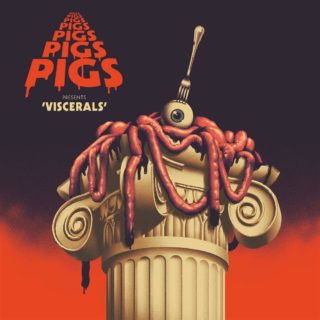