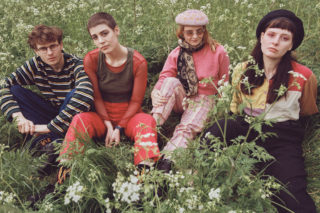 “Even if you’re playing a tiny show in the shitty upstairs of some pub for no money at all, you have to believe what you’re doing is special"

Sitting sheepishly in a pub in South London, I’ll admit I’m feeling a little apprehensive. Moments ago, two very large tattooed and men in nylon tracksuits had been scrapping it out in front of a crowd of jeering onlookers before finally being forcibly removed by police and the pub staff. Some of those involved continue to lurk and here I am, in no man’s land, upon the scattered debris of the broken glass and shrapnel; a pale skinned and scraggly haired spectator with laptop ajar, hopelessly failing to disguise murmurs of involuntary nervous laughter. The situation seemed abundantly clear: nothing screams “punch me” quite like a MacBook douchebag in a rowdy Weatherspoon’s beer garden.

Dana Margolin doesn’t seem to mind though. Sitting quite unconcerned and oblivious on the opposite end of the table, she’s amused as she lifts her stripy trouser leg to reveal a pair of flame-patterned socks. “Me and our drummer, Sam, are matching again today. I gave them to him for his Birthday whilst we were on tour and told him we’ve got to match for our last show. We forgot about it for about a week and then on the last day of tour we both got in the van and I was like, oh my god, you’re wearing the socks. I thought it was pretty cool, anyway.”

Scoffing down the remnants of her lukewarm veggie burger, the rest of her band, Porridge Radio, are sitting huddled around a table further from us. As far as lousy band names go, Porridge Radio sure isn’t one of them. Practically anyone prior to doing this interview who could be bothered to listen to my spiel had agreed with me: something about the imagery of cereal based broadcasting just sounds right and essential. Dana’s still not so sure and whilst scrunching her nose at me, she says, “I reckon everyone else thinks it makes us sound twee. But we’re not. We are definitely not twee for fuck’s sake.” This is a point of fact that she repeatedly tells me she’s keen to circulate. 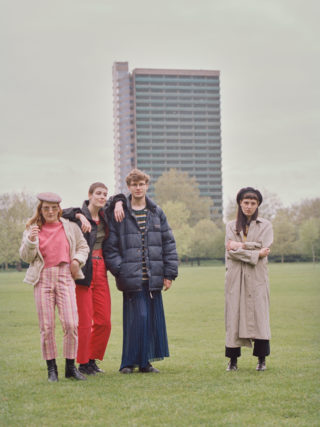 When Dana isn’t trying to convince me of her band’s anti-stance on their contrived quirks, she’s reminiscing about her childhood and her time growing up in North West London, particularly in Jewish summer camps. “From the age of about eleven I would go on these summer camps. Loads of Jewish kids would go and of course we’d pray and sing Jewish songs together, but I loved it. I’d go every year, all my social group growing up was from camp and it taught me a lot about what it means to be Jewish.” As she delves further into her heritage, it becomes clear just how much Dana identifies with Judaism and the significant part it’s played in her upbringing. “It’s just always been a really big part of my life and who I am. It’s my community; it’s how I learnt to socialise and how I learnt about value in family being important. I love it, it’s wholesome as fuck.”

She’s confident yet completely unassuming, but I can’t say that’s much to my surprise. Her band is the product of her teenage infatuation with song writing, and time after time it’s been the topic of significant praise and attention. Even back in 2015, in the band’s early days of gigging around Brighton’s pubs and small music venues, the esteemed and eccentric music journalist Everett True crowned Porridge Radio “the best band in the world” on the basis of hearing just half a song. “He missed the entire set, but he fucking loves us,” says Dana. “He’d come out to see this Australian band called Blank Realm who we were supporting. He admitted after the show that he’d only caught the last 40 seconds but said he still knew we were ‘the best band in the world’. Since then we’ve always considered ourselves to be ‘the best band in the world’. It’s our little idealist motto.

“I think you have to go around thinking you’re ‘the best band in the world’,” she says. “Even if you’re playing a tiny show in the shitty upstairs of some pub for no money at all, you have to believe what you’re doing is special and important because otherwise it’s just the most self-indulgent hobby in the world. You have to mythologise yourself slightly, otherwise you’ll lose any hope of getting somewhere.” 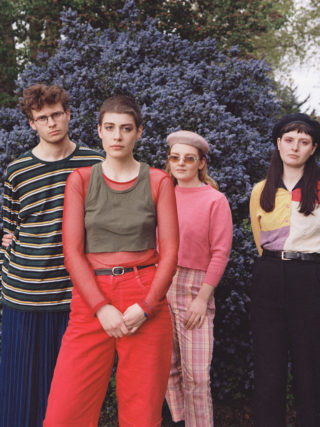 After a long run of very fortunate coincidences whilst studying at university, Porridge Radio ended up being the culmination of four very strenuous and bizarre connections between bandmates. Blossoming from Brighton’s DIY scene, they released their first album in 2016. Made from humble beginnings (being recorded on an 8-track in a shed), Rice, Pasta and Other Fillers showcased Dana’s opaquely raw, tangible and completely unconstrained emotion. Always gulping desperately at the air of her final breath, her music not only invested deeply within her herself, but also her audience. She explains: “I’ve always wanted to make music to be vulnerable. I want to allow people to see my vulnerability through the things I make and that is where I’m most honest. I think you should be as emotional as you can be because maybe it will help others access that in themselves which I think for a lot of us is quite a difficult thing to do.”

Porridge Radio’s new album will continue to harvest Dana’s projected vulnerability, but this time through a cleaner, more discernible lens. “Everything about this time around was so different,” she says. “We actually demoed it, can you believe. We went into a studio and recorded it properly. We got someone really amazing to mix it and then got it mastered by the same guy. We actually took our time with it. We didn’t just record it all on an 8-track in a shed. We actually got the chance to give feedback on the mixes to ensure it sounded like we actually imagined it to.”

Both of the new singles, ‘Give/Take’ and ‘Don’t Ask Me Twice’ are clear testament to Porridge Radio’s development, and have a bit of The Cure about them. Released just this week, ‘Don’t Ask Me Twice’ showcases the sort of punky complexity Porridge Radio have before now been sitting on whilst Dana tells me that ‘Give/Take’ is a sort of watered-down glimpse at the rest album’s mammoth full body.

Pondering years past and the struggles of gradually pulling a record together, Dana often found solace with her ultimate muse: the sea. “The sea will always be a big part of how I make things,” she tells me. “It’s such a huge, overwhelming force. When you’re at the sea, you’re at the edge of land and you’re at the furthest you can be from anything and that’s really powerful and strong. I think there is something quite religious about going underwater too. In Jewish tradition, you go in a Mikvah, it’s like a baptism. When you go underwater, you’re refreshed and your body changes. Your heartbeat slows and physically you change. There’s something very powerful about that.”

But making this record has not sounded easy. Most significantly, in October of last year the band announced that they would no longer be working with MJ, the producer and former leader of Leeds band Hookworms, due to shocking allegations of sexual assault. For the first time, Dana’s exterior hardens, but candidly she tells me, “it affected the album in a huge way because MJ was going to mix it. Mixing is a huge part of crafting the sound of a record and it would’ve sounded really different if he’d made it. But I’m really happy with how it sounds now. It sounds how it needs to sound, but it would’ve sounded different if MJ had done it.”

Not yet signed, it really feels like Porridge Radio might just be on the cusp of something bigger than Dana is yet to realise. But record deals aside, she explains why the DIY scene remains paramount to her band’s evolution. “It’s always going be important because it’s where we came from. People saw us as a shitty band with chaotic songs who couldn’t play our instruments, but they still said, ‘that’s a band who’s going to mean something to people’. Nobody from the music industry saw us and thought that’s a band we should get behind. Only the DIY community said we’ll put you on and help you out. People go out of their way in that scene and don’t expect much in return because they enjoy it and believe in what they’re doing. I’m really grateful to have been a part of that for so long and I will evolve out of it to move to the next level.”

Whatever lies in store for Porridge Radio doesn’t worry Dana too much, but she’s apprehensive to go on blabbing about it. “I watched Sigrid do an interview the other day. She said, ‘I don’t really want to tell people my dreams because what if they don’t come true’. Yeah, I can relate to that.”