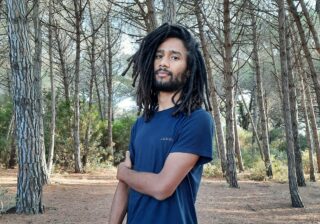 By his own admission, Herve Corti really likes computers. By day, the Italian is a researcher at the University of Pisa, focusing on quantum computing, which he describes as “trying to solve problems that cannot be solved by classical computers”. By night, as well as being a family man – he has two young children – he makes music which tests the boundaries of what is possible from electronic sound, releasing his experiments as Herva via the legendary UK footwork and electronica label Planet Mu.

Yet for his new album Seez, Corti took a step away from the computer screen and set about building his own hardware instruments for the first time. Unhappy with the capabilities of the gear he already had and unable to afford a whole new setup that could perform at the required level, he decided to simply make what he needed for himself.

“Everything started when I was trying to get the best out of my mixer,” he says. “I wasn’t happy with my old one – I wanted something that sounded unique, and I wanted to have a lot of headroom. But mixers are expensive, and at the time I wasn’t really able to pay for a high quality one, so the only solution was to build one from scratch.”

Surely that’s a pretty complicated thing to be able to do – especially on a whim? He reaches below his desk and holds up a pretty eldritch-looking hardware component, all oversized potentiometers and serpentine wiring. “Well, I took the gamble and decided to take parts from my rotary mixer and design one from the beginning; it was a risk but I’m an engineer so I trusted myself to make the mixer that I wanted to have. It became quite a quest – I spent almost a year on it. There was a lot of soldering…”

From there the idea for Seez began to develop. Could Corti create a full album from instruments and hardware he made entirely himself? And more importantly, could he use this novel equipment to create something just as new and surprising in turn?

“[Before making Seez] I almost quit making music for a year, because honestly, I didn’t add much,” he explains. “I wanted to explore new things – I am a guy that likes to change things often. And after my last latest album [2017’s Hyper Flux] I wanted to tear down the walls, I wanted to change everything. I had always used programmed sound, domain-related programming language for music production – Max MSP, SuperCollider, stuff like that. But the one I really loved was Csound, because when I was really young my father was using it to make some experimental compositions. And it was the perfect tool to make something from scratch. So I decided to build the machine.”

Again, his process was partly informed by necessity – “my own laptop, my old companion, isn’t powerful enough” to run the kinds of tracks he wanted to make. Yet by building the machine and using some basic (for him, anyway) programming through Csound, he was able to push through those limitations. One way he managed to do this was by programming his instruments in such a way that after a certain point they were able to generate sound themselves, his patterns triggering responses, his codes reproducing themselves into unpredictable new forms.

“Every track is like a separate piece of software, and you get this endless stream of music,” says Corti. “They have a basic structure, but [after that] I didn’t produce anything. I just wrote the software to generate these kinds of sounds. Then, it may sound a bit weird, but when I can see the track’s shape, I know it’s cooked. I don’t know if it’s synaesthetic stuff but I have to see to understand – when I listen to a track and the shapes and colours become defined, now the track is done.”

The resulting album is a thrillingly uncanny record, one which may nod to the more untethered work of artists like Venetian Snares or Boards of Canada, but whose seeping, organic movements take it into different realms entirely. It’s an intricate yet strangely bulging, rearing thing, like a weird new life form conjured not from carbon but code and cable. From the computer labs of Pisa and Florence has emerged something new and vital, with Herva as its benign Dr Frankenstein.