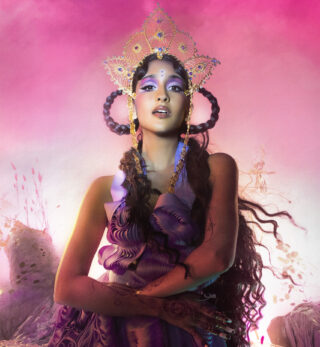 Raveena Aurora is both creating and living her dream. Calling me from Los Angeles (where she grew up and still currently resides), she’s starting her day with a meditation practice – something that has even managed to make its way onto her new record, Asha’s Awakening.

The new album reaches its finale with a guided meditation crafted by Raveena herself, something she decided to do after being frustrated by poorly mixed, stock sound-based meditation tracks. “When I first started to get into meditation, guided meditation was a really helpful tool for me to just refocus and recenter myself, and understand how to tap into that soft and centered space,” she explains.

“Having a person in [your] ear, helping guide that relaxation is really powerful. I wanted to offer that to my fans and anyone who’s just starting to get into meditation or just wanting to hear someone in the background. It’s for a useful purpose, but then also in the context of the album, the context of the story that it tells.”

That context is vividly explorative, both musically and lyrically. Asha’s Awakening sees 15 kaleidoscopic tracks forging a beautiful, radiant melting pot of R&B, soul, jazz, pop and beyond, all woven together by Indian and wider South Asian influences, and a fantastical tale of a Punjabi space princess.

“Indian culture and Punjabi culture has always surrounded me whether I embraced it or not.” Raveena says. “I grew up in an immigrant family that had recently moved to America before I was born, and they were very in touch with their culture. I grew up around a lot of brown people, going to the Gurdwara [Sikh temple] all the time. So I was inundated and surrounded by that music, that celebration of colour and spirituality, that beautiful culture I’m so grateful to be part of.”

Since 2017, Raveena has been building her distinctive musical universe. Shortly after graduating from NYU’s Tisch School of the Arts she released her critically acclaimed Shanti EP, followed by her debut album Lucid in 2019. Her records have amassed tens of millions of streams, even seeing her play at Tyler the Creator’s Camp Flog Gnaw festival, alongside collaborations with the likes of Vince Staples on her new album.

Although the new record is sprinkled with sounds from Indian culture, from solid dhol drums to stirring sitars (and even a feature with famed Indian singer-songwriter Asha Puthli), Raveena has only just begun to fully embrace sounds from her heritage and using them as an overt influence.

“In terms of the music that I listened to in my formative years, that was a lot of American pop music, R&B, soul, jazz,” she says. “I was obviously surrounded by Indian music as well, but more in the home and it wasn’t what I was automatically going to. As an adult, I really felt after Lucid, which is such an R&B and soul-centred album, that it was now time to find the connections between this and the sounds that I grew up on. Asha’s Awakening is that exploration of how to merge those two sounds together.”

Delving more into Indian music was a profound experience for Raveena. “The amount that I learned on this record about music was so beautiful. I was experimenting a lot with incorporating Hindi language into it; stretching my voice, trying to play with more Indian rhymes and verbs and being inspired by other South Asian diaspora artists [and] collaborating with them. I researched all the points where South Asian music intersected with the West [and] the two big time periods that I found very connected to were the ’70s in the early 2000s. I was listening to a lot of Alice Coltrane, The Beatles, RD Burman from the ’80s like his Bollywood soundtracks. Then the early 2000s, with M.I.A. and Timbaland and everything happening with the merging of R&B and and hip hop. As South Asian artists in the diaspora sometimes we don’t realise how much actual collaboration is happening over the course of history. Maybe because we feel so underrepresented. I think there’s a beautiful sound emerging between East and West, and I just wanted to add to that conversation.” 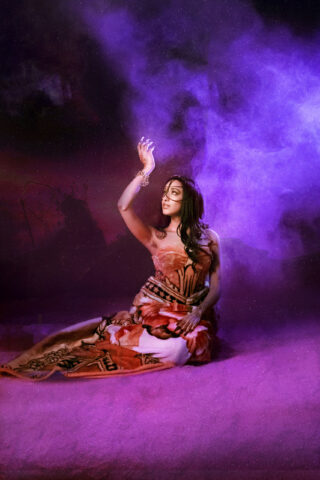 Raveena explains that while her debut album Lucid saw her deep dive into the jazz influences she grew up on and tried to emulate when she was learning her craft, from Billie Holliday to Ella Fitzgerald, on Asha’s Awakening she wanted to be more loose and experimental with her sound; citing influences all the way from Jai Paul to Solange, Missy Elliot to Nelly Furtado and Sade. However, the record’s unifying factor is the story of Asha, a 17th-century Punjabi space princess, herself.

The idea for the narrative came to Raveena during the pandemic; in creating this character and structuring the arc of the album around her, Raveena was able to break down preconceived notions of who she was as an artist, providing her with the same sense of freedom she felt when delving into South Asian music. “I think out of my boredom, this whole story of this Punjabi space princess came to me and I just ran with it,” she says. “I really connected to having a character for this album [and] I felt more comfortable breaking boundaries [and] breaking the idea of what genre I fit into. That was all possible because the character made it easier for me to even explore that. It made it less scary anyway…

“I just love world-building,” she continues. “I love having visuals in a specific universe, and love concept albums. I love when everything is tied together in some way through one central story. The story of Asha is that she was a girl in Punjab in the 1600s, and she got transported to a planet where aliens taught her highly advanced spiritual teachings, and their whole planet runs on their advanced knowledge of how to tap into spirits. She comes back down to Earth because these aliens are very kind and gentle, and don’t have sex, music and the chaos of Earth. In her human form on this planet, she misses Earth, so she comes back down to Earth and attracts this cult following which leads to her demise. She realises that part of being human is being this messy, imperfect person. Like you can  have 1000 years of meditation, but not escape the lessons of being human.”

Asha’s Awakening is split into two halves: the first half is an explosive “assault on the senses”, seizing the upbeat, sensual and joyful; this is then bridged together with the more gentle latter half by the mystical interlude of ‘Arrival to the Garden of Cosmic Speculation’.

“What I talk a lot about on the first half was embracing joy, embracing sensuality, sexuality [and] queerness.” Raveena explains. “I have these tongue-in-cheek moments where I’m aware of Asha as a character, because I think that in ways the West expects South Asian people to be these spiritually healed people. That’s something I explore in ‘Kathy Left 4 Kathmandu’, just how much that trope was put on us. So Asha plays into the trope, but she’s also highly self-aware of  what it is at the same time and how it’s so damaging. The second half is just one of my experiences with being survivor of assault and abuse, depression, an abortion… all these hard and sad life experiences that a lot of us go through.”

“I think my personal take away from the character and the story was just that, in my past healing process, I felt like this need to always be calm and always be reaching to that point of being at peace with everything,” she concedes. “Then at the same time taking on a lot of pain and not really advocating for myself or having boundaries. I think what Asha taught me is that you can meditate all you want but engaging in life is this messy, imperfect process, and I’m never gonna reach this kind of spiritual perfection, especially in one lifetime. You just have to embrace being this sexual, emotional, messy, imperfect human.”