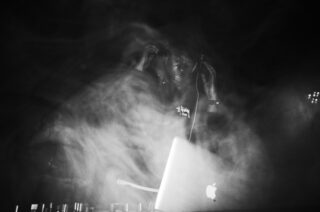 On an overcast evening in the middle of an unusually chilly spring, an East London web developer called Ed is reading to me directly from a spreadsheet. A softly-spoken twentysomething, he’s reserved but friendly, patiently talking me through the various commitments he’s got on this year, and how he’s negotiating a reduced-hours contract with his employer. One might not expect such an unassuming figure to moonlight as the visionary producer behind some of the UK’s most exciting new dance music; but then, listening to his work as Tim Reaper, it’s not exactly clear who one would expect to be making this stuff.

To jungle heads, Reaper’s music is at once familiar, stacked with classic breaks and chopped vocals that surge and clatter with the refined ferocity of innovators like Goldie and Dillinja, and refreshingly modernistic, crammed with sideways lurches and sonic juxtapositions to distinguish him from the countless ’90s revivalists who have populated the crustier fringes of the drum and bass scene for years. It’s fast, uncompromising, heavy jungle, with more than enough invention to breathe new life into the now-venerable genre.

Anyway, back to the spreadsheet, and the day job. “It’s been okay for the past few years,” says Reaper, “but so far this year I’ve got a lot more bookings than usual. So I’m trying to negotiate maybe doing four days a week rather than five, because I could do with the extra day for travel and sorting out guest mixes and releases.”

This will probably be a wise move. Over the last few months, Reaper’s reputation has begun to grow pretty quickly. A show on NTS radio, a smattering of press and some high-profile releases on well-respected labels like Lobster Theremin and frequent Radio 1 guest Sherelle’s new imprint Hooversound have exposed his work to listeners beyond the core jungle scene, something even this strikingly laidback guy seems (cautiously) excited about.

“It does feel like jungle’s having an ‘in’ period. People who are usually more into techno and dubstep are taking an interest now. I can’t tell you why. But it does feel like a thing that goes in and out of fashion… I was doing this for the longest time, releasing these 12s and stuff, and suddenly there’s all these eyes on us. I think it’s good; whether it lasts or not, I think you should make the most out of it.”

As he says, Reaper has been doing this long enough to be able to take a longer-term perspective on jungle’s fortunes. He’s been immersed in the genre since he was at school, long before its current period of critical and commercial resurgence – not, of course, that jungle’s ever really gone away.

“I was doing my GCSE Media Studies, and I had to compare two music magazines,” he recalls. “One of them was Mixmag, and they had an Andy C mix CD on the cover. And out of curiosity I listened to it and I was completely blown away by the tunes and the DJing. To find out more about it, I started Googling the tracklist and found a few forums, finding more and more examples of producers and labels all involved in this music. At that time MySpace was popular, so I used to rip music off MySpace and listen to it on my iPod. There was a fake DJ Hype profile on there and they had, like, ‘Super Sharp Shooter’ [by DJ Zinc/The Ganja Kru] and stuff on there. And I found myself listening to those tunes in particular, more so than any drum and bass up to that point.” 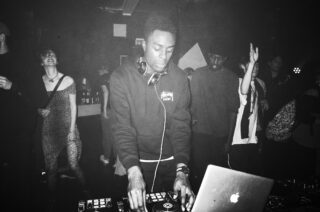 For a while, Tim Reaper’s desire to get into jungle was a fairly lonely pursuit. His schoolfriends more interested in popular grime and R&B (“I guess really strong bass was a little bit too much for them”), he spent hours scouring YouTube and jungle forums, gradually finding a community of like-minded bass fans as he went. When I mention that this seems pretty unusual – most dance obsessives I know came to the music through nightlife and friendship, rather than the other way around – he agrees, and points out how this affected his creative development.

“When you have no one to show you the way, you have to guide your own path and discover stuff yourself. So maybe that made me sort of discover as much as I did. Because I was so intrigued by the music, and since I was the only person who could source stuff for myself, it made me used to being patient, like ‘let’s keep digging’.”

This made the young Reaper a real student of the genre, and it shows. From his knack for the perfect sample to the sheer breadth of knowledge he brings to our conversation, he knows this stuff inside out. And he’s still learning.

“I’m usually listening to music as I’m doing my work during the day, and I’ll take note of things to sample later. Then you source the release it’s on, and if the release is really good, and you can try and investigate the other stuff the artists have done, or if you find them on a compilation, you can find a lot of different artists doing the same kind of style. It gives you loads of branching points to source more stuff. So you’ll go through that…” He undertakes these deep dives and close studies on a daily basis; his level of dedication seems more elite athlete than bedroom producer.

The events of the past year have afforded him more time to refine his craft even further. Still working from no-frills production software FL Studio (fka FruityLoops), he’s become even more prolific, releasing mix after mix and EP after EP, his work getting sharper all the time. Alongside that, he’s set up his own label, Future Retro, initially based on a club night that, like so many others, had to be cancelled last year, showcasing a range of forward-looking bass music from the scene of which he’s become such an integral part.

“A lot of my close friends are label owners, so I would observe how they run things and pick up some best practices. Before this I’d never had much label experience, but I had the idea for a collaboration series, and I’d built up a bit of a following promoting the first Future Retro night, so I thought I could keep that brand going.”

As productive as he’s managed to be during the pandemic, he’s still keen to get back out there once lockdown eases – and finds space for optimism amid all the gloom of recent months.

“Having the live crowd to react to the music you playing, and being able to bounce off that is an experience that’s quite unmatched. I’ve done DJ streams and parties and stuff, and they’re fine for now, but they don’t really care compared to live events. There’s quite a few bookings I’ve lined up for this year that are not my usual kind of style,” he says. “I really ever get booked for festivals, especially festivals that aren’t drum and bass festivals, so I’m both interested and worried to see what it’ll be like to play to crowds who aren’t there just for jungle. So I’ll have to wait and see if I just get blank stares.

“There’s some days I feel like day one after lockdown is going to be complete carnage – everyone’s gonna be fully going for everything. At the same time, I feel like on day one, maybe not everyone will go out yet, thinking they might see how things go. I’ve seen a few clubs close down, but I’ve also got a booking or two for brand new clubs that have opened, where people have come out of this and want to open new venues. It sometimes feels like it’s never gonna bounce back, but I think sometimes people underestimate other people’s resilience.”