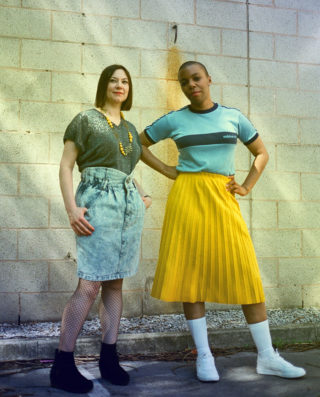 22 June 2018 is a date that’s been a long time coming for Maria Uzor and Gemma Cullingford. The two Norwich natives have been ploughing their own furrows through independent music both together and apart for well over a decade, but only now are they ready to brandish their fully-formed debut album as Sink Ya Teeth.

“It’s exciting, I love the anticipation,” Cullingford tells me as we share a drink in the Bank Holiday weekend sunshine after their set supporting The Membranes at Manchester’s Ritz. “And then when it’s out, it’ll be like we don’t know what to do anymore.”

The self-titled record is fizzing with rare groove sass and spacious synths teaming up with post-punk basslines to create a minimal dance style that they can fairly call their own. Uzor’s vocals range from detached cool to spiky defiance, whilst the songs often deal with the darkness that lurks just under the surface of our everyday lives.

“There are elements of exploring the fragility that you experience as a human being, particularly in terms of friendships and social situations,” explains Uzor, outlining the album’s loose central theme. “I take an element of something that I’ve experienced and I magnify it.” It’s an acutely observational songwriting discipline that ultimately lends the album a bracingly honest air, its tales of hedonism always tempered by an acknowledgement that it’s an ongoing challenge to operate as a functional adult in our current world.

Uzor and Cullingford live a ten-minute walk apart, but still tend to write separately. “Sometimes in the morning if I get an idea, I’ll open the window and go, ‘Oi Gemma!’ and she’s down at the bottom of the hill,” jokes Uzor. Alas, their Norfolk existence isn’t quite that Hobbit-like, settling instead for sending files back and forth in the run-up to their weekly practice session. “I get really excited when I hear what Maria comes back with, it’s usually nothing like what I would have ever imagined, I never get used to it,” says Cullingford. 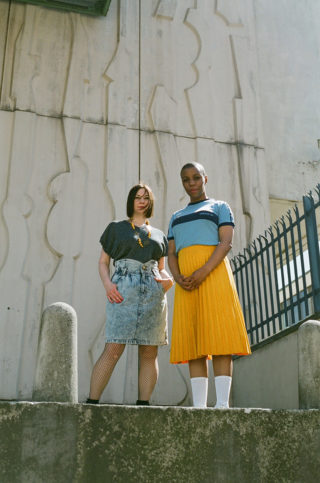 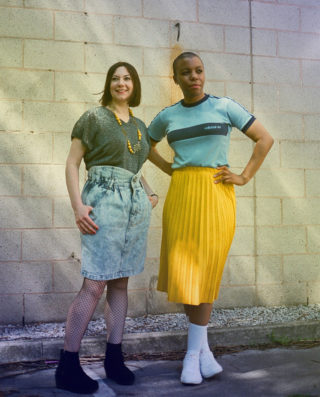 They settled as a two-piece in 2015, after Cullingford had become involved in Uzor’s solo project, Girl In A Thunderbolt. “If you rely on other musicians, they can’t commit very easily,” says Cullingford. “We work at a certain pace and we just want to get on with it, so it’s easy for us. We’re similar in commitment and focus.” It is a revealing comment from somebody who has spent the best part of twenty years as a member of touring bands, most notably the critically acclaimed KaitO who she played in around the turn of the century. Before meeting Uzor, she says she had stopped wanting to be in a band. “I don’t really like the politics in bands sometimes, I find it difficult. But I decided I’d listen to see what Maria was about and I thought, ‘fucking hell, I really like this!’”

It led to her joining Girl In A Thunderbolt as a guitarist three summers ago, although as Uzor explains, after her third or fourth gig with them, the seven-year-long project came to an end. “Our bassist had to go travelling, and trying to organise different people became very hard, so Gemma and I formed a two-piece.”

Sink Ya Teeth were formed, but with their various respective musical backgrounds, the new duo’s direction was not a given. Before the indie blues of Girl In A Thunderbolt, Uzor had gained her first experience in a garage punk band called The Incidentals. “It’s always good to cut your teeth on garage punk,” she says. “Your first band is a way to purge.” When it comes to their decision to hone in on the dance genre for Sink Ya Yeeth, Uzor is fairly relaxed about the subject. “When you’re into music, you’re into all sorts of things. You are every single type of music you listen to. I listen to reggae, to classical. Maybe I might do a solo classical album some time, or a grime album. We decided to make dance music. I love anything with rhythm.” 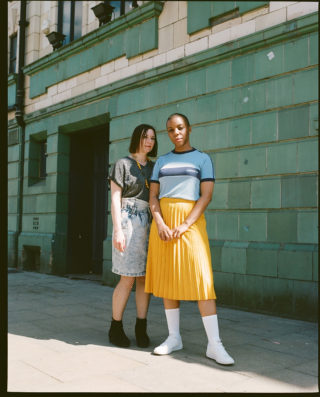 Sink Ya Teeth’s experiences have taught them that there is a lot to be said for true independence. “We’re so worried that if we get someone else on board, they wouldn’t be able to keep up with us,” admits Cullingford. Having secured some funding from Arts Council England, they set about writing and recording a set of songs, without worrying about waiting for a label to pick them up. “We do our own artwork, we write the songs, and we produce, mix, record and release our music ourselves. Sometimes we do our own videos too. It’s good to have that kind of control, but it ain’t cheap!” That’s not to say that they’re adverse to the label model either: their first two singles were released on 1965 Records, but a funding issue got in the way of that. In the event, the album is coming out on Hey Buffalo, Uzor’s own label that she set up for Girl in a Thunderbolt.

The other price of artistic independence, of course, is a reliance on the day job. Uzor is a support worker and textiles teacher at a school for children who have been bullied, whilst Cullingford is a self-employed ukulele teacher for 6 to 10 year olds.

Barely a piece has been written about this duo that doesn’t compare them to the seminal New York no wave group ESG. Without a doubt, there are similarities in their economical dance-punk arrangements, especially on a track like ‘If You See Me’, but whilst Cullingford is a big fan, Uzor, who wrote the song in question, is largely unfamiliar with the group. “I think it’s probably that I listen to the same music that they were influenced by too,” she suggests. Cullingford is less sure. “I love ESG, but I don’t get the comparison,” she says. “I guess it’s the fact that it’s mostly drums and bass, but I wouldn’t say vocally that Maria is anything like [ESG singer] Renee Scroggins.” They reference S-Express, LCD Soundsystem and Shopping as artists they consider as kindred spirits, whilst Cullingford points to Tina Weymouth, Carol Kaye and Peter Hook as bassists she admires. It’s another Manchester music institution, however, that they have formed a relationship with over the last year: when A Certain Ratio saw them supporting !!! at a gig at Manchester venue Gorilla, they reached out to them and consequently the two will be sharing a stage on multiple occasions this summer.

When a passing remark is made about possibly recording alongside Electronic in the future, the conversation strays, as so many have done recently, into the murky waters that surround Morrissey. Speaking just days after his most recent and most indefensible outburst to date, Uzor expands on how hard it has become to reconcile her teenage love for The Smiths with the man’s current descent into a cheap UKIP soundbite machine. “You find out he’s a racist twat, and you’re a black person. It’s like I’ve wasted my entire teenage years on this cunt. I’m in a period of mourning, but also defiance.” Realising the potential here, Cullingford suggests that we set up a Blur-Oasis style media war between Sink Ya Teeth and Morrissey, to which Uzor, seamlessly slipping into an unsettlingly good Moz impression, replies in his stead: “Ohh I’ve never heard of them. And anyway, they’ve got a black person.”