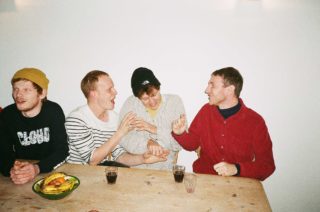 Doing all the important things in order

Awkward interview locations are all too familiar. If it isn’t under the sterile glow of a garish hotel lobby, it’s a bad pub or the drab leather-bound interior of an inner city Starbucks. Clearly, Squid share a similar opinion and instead, sitting tightly huddled around drummer and vocalist Ollie Judge’s kitchen table, we wipe away any usual formalities with wine and a takeaway curry.

About a week earlier I’d managed to catch one of their live shows (there’s always a lot to choose from) at Corsica Studios where, much to the delight of the audience (and some members of the band), they’d performed a spontaneous version of George Michael’s ‘Last Christmas’ – on a keytar. “Let’s just say it was very impromptu. I left them for five fucking minutes to get a new string,” says guitarist and vocalist Louis Borlase.

“I’ve had that keytar since I was born,” laughs brass and bass player Laurie Nakivell. “That version of George Michael has sound-tracked most of my previous Christmases.”

“I think you’ll find there’s never a bad time for George Michael,” says keys and synth player Arthur Ledbetter. “That can be the tag line for this feature.” 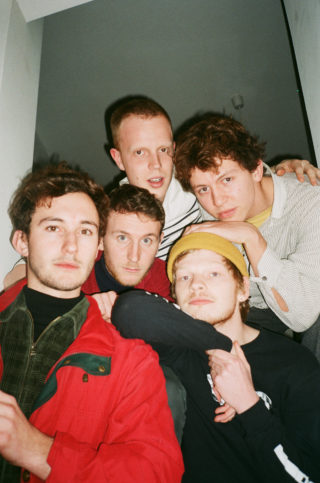 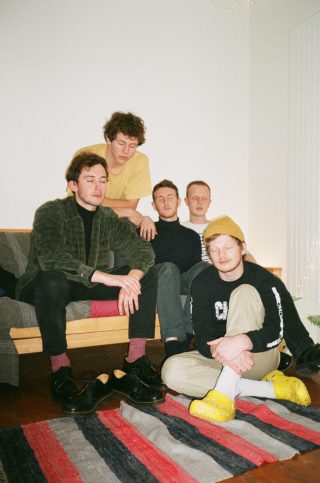 Arising from various musical projects at university, Squid were wound together by a mutual appreciation of Neu!’s debut album, some of the music coming out of ECM Records and playing to regular crowds of friends around jazz cafés in Brighton. “Before Squid, Laurie, Anton and I used to be in a funk and soul covers band. I think we were called ‘Soul Campbell’ at one point,” recalls Judge. As I nearly knock over my wine glass, Nakivell interjects. “I wanted to call it ‘Arse Soul’, but it got vetoed.” Resetting the sincerity, Judge recalls, “at the time, I’d been playing with a few bands in the same kind of scene as Porridge Radio, Garden Centre and Joanna Gruesome. But Squid never really fitted into that.”

As it turns out, Squid weren’t really interested in fitting into that scene. In fact, all they wanted to do was listen to modal jazz and kraut rock alongside recording ambient music in each other’s bedrooms. “Neu! was rubbing off on us a lot, especially with Ollie’s style of drumming,” says Borlase. “Even before we’d introduced any vocals, that motorik, monotonous beat began to define the sound. It was a very important stage in realising our style.”

Vocal responsibilities tend to be shared around Squid’s personnel, but more often than not it’s Judge’s yell from behind the drum kit that leads proceedings. “I’ve never had any drum lessons at all,” he explains, “so considering kraut rock and its monotonous elements, I don’t have to think all that much about the intricacies of drumming, which I guess lends quite well to the singing.” 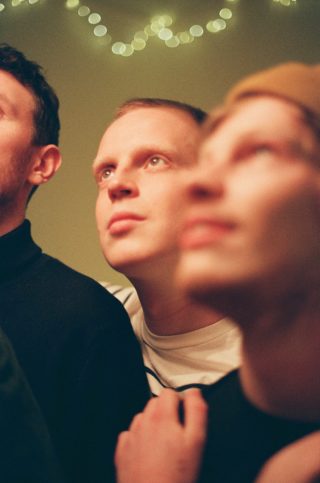 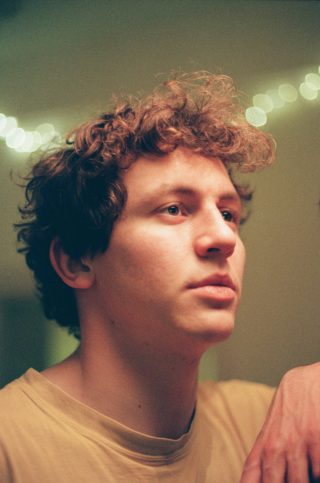 This hasn’t been a long-standing arrangement either. As guitarist and vocalist Anton Person explains, “about 6 months ago we didn’t really have a lead singer. We had songs where it would be Ollie, Louis or myself playing the role of lead singer. It’s only recently that we’ve realised that we’re at our strongest when Ollie is doing most of the vocals.” That being said, it’s clear Squid operate as one entity, where no singular member takes any more precedence than the next. By rejecting the conventional frontman model, their approach to playing and writing music feels refreshingly fluid. And most interesting of all is their dual formula to song writing. “When we write a song I’ll write some of the lyrics and then Louis will write some of his own separately,” says Judge. “The weird thing is, often each of our narratives somehow intertwine and it ends up combining to make a completely unique final product.”

“I think when we write the vocal parts we’ve established a system of toing and froing,” says Borlase. “We’ve got a track called ‘The Cleaner’, which is basically a back and fourth between Ollie’s main narrative and my counter story. We really like this idea of backwards and forwards storytelling where each part is derived from a completely different subject or perspective.”

Originally written about Judge’s tenuous relationship with a cleaner during his time working behind a record shop counter, Borlase’s contribution provides a wider angle, even despite his initial reservations. “The funny thing about ‘The Cleaner’ is when we were both telling our respective stories, it suddenly occurred to me that I might be retracting from Ollie’s own personal monologue. But when he was talking about seeing the cleaner arrive everyday, alone and before everyone else, just the idea of observing this person’s day-to-day became very much about being constrained in some claustrophobic environment. That’s an example of where one of our songs has taken quite a strange turn in terms of focus. A lot of people who’ve seen our set now tell us that they don’t really know who to look at whilst we’re playing.”

Treading carefully, I ask about the reoccurring theme of mental illness in Judge’s lyrics. There’s a slight reluctance but he’s happy to oblige. “Yes, I think it is something I tend to write about. ‘The Dial’ is about my girlfriend’s struggle with anorexia, something she’s thankfully through now. Our other single, ‘Terrestrial Changeover Blues’, is about social anxiety too.”

There’s also a standout track in the band’s live set, although the only part of the song I can make out is Judge barking something about connecting a red wire to a blue wire. “Ah yes,” he says. “When I was working this temp job in FOPP I used to know this guy that came in all the time. I assumed he had either bipolar or schizophrenia but he’d just talk to you for an hour at a time. He once gave me a betting slip with some passages from the bible written on it and told me that I had to deliver it to the Queen. He was into good music and always bought Sonic Youth records – I had a bit of a soft spot for him.” 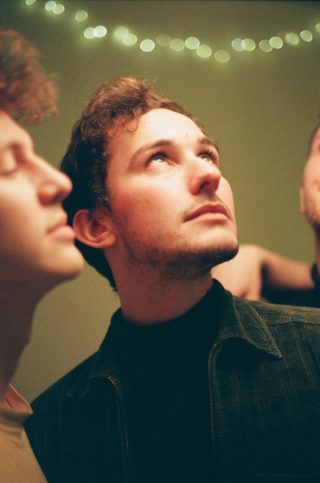 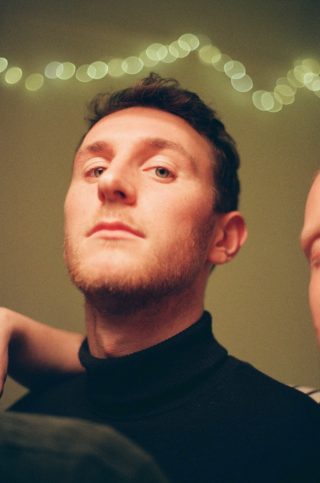 In the second half of last year the band released ‘The Dial’ via Speedy Wunderground, the singles label of enigmatic producer Dan Carey. “He’s got the most child-like passion for music,” says Judge when I mention Carey’s name. “He goes away to LA to Rick Ruben’s place but you’d never know it.

“Funnily enough, I was reading Loud And Quiet a while back and I saw that Lottie and Rosy from Goat Girl did that ‘Bands Buy Records’ video thing. They were talking about recording their album with this guy Dan Carey so I Googled him and this Quietus interview came up with all this stuff about Speedy Wunderground. It just sounded like everything we were looking for so I sent him an email with ‘Changeover Terrestrial Blues’ attached. Obviously didn’t expect to hear anything back. A couple of days later I got a two sentence reply saying, ‘Sounds cool, could be recorded better. When you playing next?’ I couldn’t believe it. I told him we were playing at Off The Cuff and he just said, ‘Cool, I’ll be there. Put me on guest list.’” And that was it. Squid did what Carey dotingly calls a ‘Speedy’ and it seems they couldn’t be happier with the outcome. “In the studio, he doesn’t use a lot of words,” explains Ledbetter. “He does lots of listening and occasionally offers slight direction where he steers you and that’s when he catches it. He’ll say something like, ‘maybe just try this for a little bit,’ and then before we even feel like we’ve started back over again, he just says, ‘we’re done.’”

“Our trajectory would not be anywhere without Dan Carey,” says Judge, “and the fact that he took a punt on some unknown band with 500 likes on Facebook…”

With more live dates ahead this year (Squid seemed to play a show a night through December 2018), the band will soon play their biggest yet at South By South West.

Go and see Squid play and you’ll see that they already have a handle on that. Next, their focus is on the studio. And they don’t intend to go in there alone. As Nakivell tells me: “We’ve all unanimously realised that there are loads of bands around us that we listen to regularly – like Black Country, New Road and Jockstrap – who feature so many amazing musicians that we’d really like to communicate with and ask to play on our records. When we’ve got a clearer idea about where we’re heading, we want to be collaborating and incorporating other people’s ideas into our own.” Squid’s communal approach to making music, it seems, extends to even beyond the band itself.

Squid are hellbent on fulfilling their infinite potential