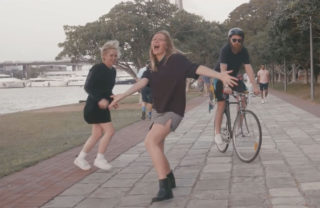 Phantastic Ferniture have made the truest video ever

Julia Jacklin has a new band called Phantastic Ferniture who are releasing a debut album on July 27 via Transgressive in the UK. It’s a great record, but the track I can’t get enough of is ‘Fucking ‘n’ Rolling’, and that’s because of this video.

This video is the perfect embodiment of what all music videos should be – people so into the track they’re miming that they’re running around and making their arms move in ways that they usually wouldn’t. Every now and then there’s a kick or a spin. You could do this and probably have!

It’s what we all can’t help but do at a wedding when ‘Gold’ comes on. You know that musicians don’t actually grab the air in music videos but you’re doing it anyway and waiting for someone to tell your better half that they think you could be in a band.

This is one addictive video – the track itself is killer, Jacklin keeps widening her arms to the camera and Elizabeth Hughes inexplicably runs around in circles like a happy 5 year old. And you need Ryan K Brennan to be poe-faced as he peddles around them, otherwise it might seem a little too much.

I’m going to watch it again.