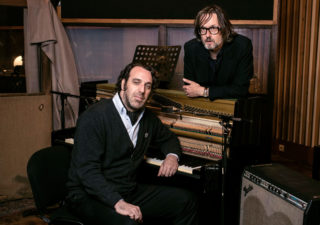 The pair – whose friendship goes back 15 years or more, and cemented when they both lived in Paris – have made a “21st century song cycle”.

Not ones to slump into conventional album making, they had been searching for the right project for a while.

Until Jarvis, on tour with Pulp, checked into legendary Chateux Marmont hotel in California. It was busy, so his room was upgraded. In the corner of his suite was a baby grand piano. The instrument, and the “stories it could tell” about the room’s previous inhabitants, all those famous Hollywood spirits, were to become the centre of this set of piano ballads.

Listen to a pair of new tracks below. ‘Tearjerker’ is particularly great, where Jarvis gets away with rhyming “tearjerker” with the line “you are such a jerk, yeah”.

‘Room 29’ is released via Deutsche Grammophon on 17 March.