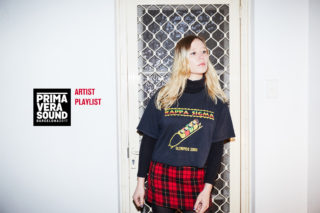 Words by Loud And Quiet Photos by James Adams

Not long now. At the end of May, Primavera Sound 2017 kicks off in Barcelona.

Once again the team behind the whole thing have put together one of the biggest and best line-ups of the summer.

Ahead of it all happening, we’ve asked a handful of artists playing this year’s festival to take a scan down the line-up poster and put together a guest playlist of their favourite acts who’re also on the bill.

First up, Julia Jacklin will be making her debut at the festival. She’s playing on Thursday 1 June on the Adidas Originals Stage.

You can listen to her gust mix below via Apple Music or Spotify, whichever you prefer. Before that, Julia’s written some words about her selections.

Solange – Cranes In The Sky

This was probably my favourite song of last year. At least the one I listened to the most. Made me consider changing genres a few times. Or at least having a side project.

Played a lot of the songs off this record when I did 3-hour corner-of-the-bar acoustic gigs. Dark times but great songs to play.

I remember asking my piano teacher to teach me this when I was 16. She didn’t seem shocked by those lyrics coming out of my mouth, but maybe she just wasn’t paying attention.

Apparently this is written about Julian’s [Ehrlich, drummer and singer] grandfather after he died. After I heard that, it really moved me. Just a really bittersweet but beautiful song about losing someone.

Just music that makes you feel better. Makes me feel like I should write some heavier music just to see what it feels like to play.

Gordi – Can We Work It Out?

This is just my kind of song. Specific lyrics. Beautiful melody. Late introduction of the band. No frills, just perfect.

Kevin Morby – I Have Been To The Mountain

Great bass, really like the bass, and the female backing vocals are epic. Also wish the music video was mine.

I think this was the first Angel Olsen song I heard. Really like the production on this one. And the line that says either, “I want to be the bed you miss” or “mess” both work and it’s beautiful.