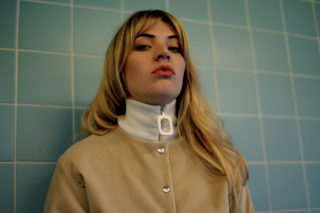 'Your Wife' is the first track she's shared

Almost a year ago to the day, Slow Club released their fifth album ‘One Day All of This Won’t Matter Anymore’. That pretty much marked 10 years for the Sheffield duo – Rebecca Taylor and Charles Watson. An album every 24 months and tens of thousands of miles on the touring clock, they worked hard.

Natural then, that they’ve both decided to take a break and try something different for the moment. And Self Esteem’s debut single ‘Your Wife’ is different in an entirely refreshing way.

Self Esteem, of course, fluctuates. And this is a project in which Taylor can write about her experiences over the past decade but also express more of herself (both ups and downs, things which piss her off and things which make her laugh).

Her first track, ‘Your Wife’, is the first taste of an experimentation with a new sound, too. The electronic pop meets Fleetwood Mac pop track was produced by Django Django’s Dave Maclean.

‘Your Wife’ is being released on limited edition 12″ via Kick And Clap on November 24.