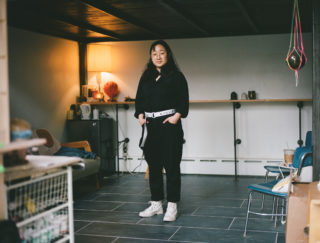 Yaeji is a producer and visual artist now based in Bushwick, NY. Kathy Yaeji Lee was born in Queens before spending parts of her childhood in Atlanta, Seoul and before now settling back in the States.

She invited Colin Groundwater to her studio in this month’s issue of Loud And Quiet – read the interview – but in the meantime, just before she heads to play a couple of US shows with SMERZ, she’s shared a new track ‘Therapy’.

It’s got the same heady vibe that made some of her earlier tracks like ‘Feel It Out’, and her recent self-titled EP on GODMODE, so magnetic.

There was the surreal sight of a bunch of pineapples whizzing around the screen in her ‘Feel It Out’ video. Now, with this new one, Yaeji takes a ride to work, walks her dog and generally gets on with just another average day… but somehow makes it look much more stylish than ours.

If Yaeji's new mixtape was a person, you'd want to be their friend