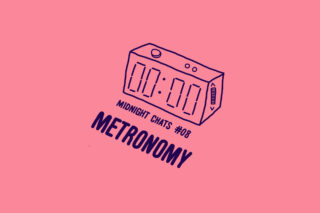 Joseph Mount talks about European football championships, his love of tracksuits and why he won't tour their fifth album 'Summer 08'.

Joe Mount is a fascinating character, and so is his solo project-come-band Metronomy. Five albums in, and eight years since the release of Metronomy’s second album, ‘Nights Out’, he’s made the sister LP to that breakthrough record, ‘Summer 08’, out next month.

This edition of Midnight Chats took place in a sweltering office boardroom at Joe’s label, Because Music, on the opening day of the Euros. We chatted about the football for a bit before moving onto other important topics of the day, like tennis, tracksuits, Honda internet chat rooms and how by becoming a DJ Joe has fallen in love with ‘the drop’.