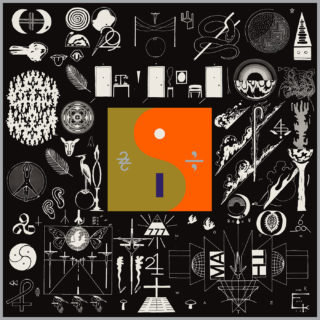 On the face of it, ‘22, A Million’ appears precision engineered to alienate all the couples who became Bon Iver fans when their wedding photographer picked ‘Holocene’ to soundtrack the Facebook video montage of their happy day. The unpronounceable track listing and cut’n’paste lyrics, the densely autotuned vocals and fractured production: it all contributes to a tableau of “piss off” – of deliberate difficulty and distancing, a bloody-minded way for Justin Vernon to process the anxiety and panic attacks that have followed him around since he became a reluctant arena pop star five years ago.

But, like ‘Kid A’ most obviously before it, the wonder of ‘22, A Million’ lies precisely in the presentation of that damaged disaffection: this is a frayed knot of an album, impossible to unpick without destroying its intrinsic worth, distressed, mangled and weather-beaten, but also containing a cracked beauty that would disintegrate were it any more accessible. Unlike its predecessor, accessibility is a long way down ‘22, A Million’’s list of priorities. Instead, it makes virtues of its own flaws and neuroses, both through its glitched, faulty-connection recording techniques and the selected lyrical obfuscation.

Through all the thorns, though, what hasn’t diminished is Vernon’s way with a melody. With repeated listens, keening, melancholic tunes make lasting impressions on the fug, and an album of delicate clarity full of rather beautiful songs begins to distinguish itself. Combined with the gently subversive song structures, which hit a peak with the golden borrowed chord 40 seconds into ‘29 #Strafford APTS’, it becomes apparent that Vernon’s production techniques here aren’t a sort of Vaseline-on-the-lens trick, but almost the opposite: the added texture accentuates the attendant substance, encouraging and rewarding ever-closer listening that sculpts the familiar from the foreign.

With meanderings close to soft-rock pastiche and to skronking jazz, ‘22, A Million’ is so nearly a complete mess. With its sad-lad balladeering and vocoders, it also sails dangerously near to utter self-parody. That it avoids both these pratfalls so elegantly, however, with neither smugness nor pomposity, is what makes it such an addictive and fulfilling record. The obvious attraction here lies in admiring Vernon’s artistic skill, but the greater pleasure is in the album’s simple honesty: this is unmistakably the music Vernon felt he had to make – not self-pitying or even particularly sad, but still with an abstracted sense of longing that feels as universal as it does personal.

‘22, A Million’ is the sound of a battered romantic coming to terms with the state of his life. It plays out like a slow march towards some abstruse redemption. That Vernon’s sonic catharsis is by turns infectious, therapeutic, poignant and ultimately rather heart-melting makes ‘22, A Million’ that rare thing – a record full of artifice whose high-concept tricks primarily serve an emotional (rather than intellectual) purpose; a brilliant paradox as dreamlike as it is earthly; a proudly bruised tranquil gem.