There’s a lot to say about the line-up for Primavera Sound 2019.

Firstly, that a festival of its size and sway has booked a line-up that’s s 50/50 gender split is important. “We should have done it ages ago,” they explain, “looking back over our previous line ups and despite the progress in the last few editions, we needed to go further. If half of our audience is female, why shouldn’t half of our line up be so too?”

Secondly, the diversity they’ve been cranking up the past couple of years has accelerated. Notably there’s much more reggaeton, electronic music and pop.

Then, just look at that line-up. Anyone who has been knows it’s not an event built around the traditional headliner model. Usually there are two ‘headliners’ playing back to back on the main stages mid-way through the schedule. While the ‘headliners’ for 2019 are officially Solange, Tame Impala, Cardi B, J Balvin, Erykah Badu, Future, Janelle Monáe, Nas and Rosalía check out some of the artists also playing: Robyn, Mac DeMarco, FKA Twigs, Christine and the Queens, James Blake, Big Red Machine (Justin Vernon and Aaron Dessner), Nas, Primal Scream, Interpol, Courtney Barnett and Pusha T.

As always, with a whopping 226 names announced, there are curiosities to pull-out all across the festival, too. Surely Carcass and Carly Rae Jepsen have never been on the same bill before.

Digest the bill in your own time, but some stuff on there that has immediately caught our eye includes a reformed Stereolab, Low, Kate Tempest, Liz Phair, Jarvis Cocker, SOPHIE, Kali Uchis, JPEGMAFIA, Dirty Projectors (playing x2 shows), Flohio, Peggy Gou, slowthai, Sons of Kemet, Yaeji, The Messthetics (Joe Lally and Brendan Canty from Fugazi), Princess Nokia, BEAK>, Filthy Friends of Peter Buck (REM) and Corin Tucker (Sleater-Kinney)  … Shellac are playing too, but you get the point.

The festival takes place at Parc del Fòrum, Barcelona between 30 May – 1 June. Tickets are on sale now – they’re €180 until 7 January, after which the price will go marginally up.

We’re proud to be a partner of this one for the 6th year. 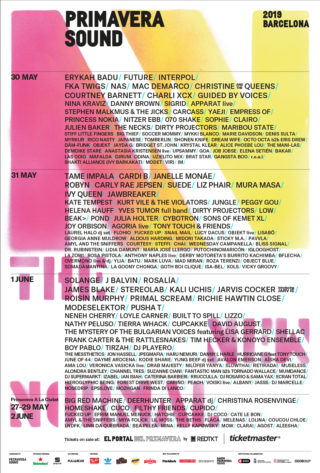 Check out all of Loud And Quiet’s previous Primavera Sound coverage.