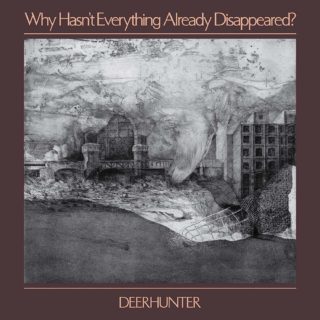 There aren’t many bands who can reach their eighth LP and still have the listener at a genuine loss as to what to expect going in, but Deerhunter are one of them.

Their latest arrives nearly a decade after their career highlight to date, 2010’s ‘Halycon Digest’, and you wonder whether, on an alternate timeline, they might have taken a different turn – a more straightforward one – after that album, just like ‘Microcastle’, and ‘Weird Era Cont.’ before it, was lavished with the sort of critical praise that inevitably brought the Atlantans to the attention of the wing of the alternative music world that tends to be more traditional in its tastes. ‘Halcyon Digest’ was adventurous and experimental but there were also aspects to its design – the polish of the guitars, the crispness of the production, the pointedness of the melodies – that suggested there was a more populist route for Deerhunter to pursue, should they have cared to.

They didn’t, of course; when they did follow up ‘Halcyon Digest’ in 2013, it was with the awkward and deeply personal ‘Monomania’, which swung wildly between noisy, lo-fi rock and roll and bouncy pop. In the process, the band reaffirmed their ambition whilst damping down their commercial prospects, and by the time they delivered a quick-fire follow-up a couple of years later in the shape of ‘Fading Frontier’, a handsome, dreamy collection that chronicled frontman Bradford Cox’s recovery from a serious car accident, it was clear that Deerhunter were only ever going to march to the beat of their own drum.

Which brings us, neatly, to their eighth album, ‘Why Hasn’t Everything Already Disappeared?’. It’s their first full-length in over three years, which means it’s their first since Donald Trump became President Trump, and since the western world in general took a dramatic rightwards lurch towards populism and, in the process, away from intellectualism (“we’re sick of experts”), with artistic expression too becoming something less valued by the populace at large. Perhaps it’s that last point that has spurred Deerhunter, never a band overtly concerned with the issues of the day in the past, to make what is far and away their most political record so far.

It’s been interesting to track the response of American artists to the country’s new political landscape – particularly this year, because many of the albums that would have been in gestation when the election happened in November 2016, or when Trump was inaugurated the following January, have been steadily trickling out into the world over the course of 2018. Some have thrown themselves headfirst into facing the issues head-on, either because their consciences wouldn’t let them continue on as normal or simply because they didn’t want to look as if they were putting their fingers in their ears and pretending as if nothing was happening. What that’s meant is that bands not known for their politics have suddenly recast themselves as firebrands, with mixed results ranging from the thrilling, broiling rage of Childish Gambino’s ‘This Is America’ to Superchunk’s awkward and misguided ‘What a Time to Be Alive’.

Then, there’s the records that the current state of affairs seems to have seeped into more subtly; it is no coincidence that Low, twenty-five years into a storied career, turned out their most abrasive and turbulent release yet, ‘Double Negative’, this past September, whilst the wider ripples of Trump’s bigotry have been felt further afield; the usually placid First Aid Kit turned out a furious single railing against misogyny called ‘You Are the Problem Here’ within two months of the Women’s Marches around the world, and for all the fabulous choreography, musical ingenuity and soaring ambition of David Byrne’s universally-lauded ‘American Utopia’ tour this year, many of the rave reviews have overlooked the fact that the former Talking Heads frontman – a staunch advocate of involvement in community politics, but less vocal in terms of the bigger picture – has closed every show with a stirring cover of Janelle Monae’s ‘Hell You Talmbout’, which means that, for all the giddy euphoria of the rest of the show, it ends every night with a grim roll call of the names of African-Americans to have died as a result of racially-motivated violence.

Deerhunter’s approach to making their first out-and-out political album is another one entirely and suggests that, arriving as it does so early in the year, it’s possible that 2019 might herald a new wave of nuanced, intelligent political albums, ones capable of picking apart the current climate in inventive and abstract ways. ‘Why Hasn’t Everything Already Disappeared?’ feels like a fatalistic title, and not just in terms of the state of the world; Cox is also questioning whether or not the very concept of the album is a relevant one in a world with ever shorter attention spans.

The answer to that question, in the case of this record, is surely yes; ‘Why Hasn’t Everything Already Disappeared?’ justifies its own existence by taking a carefully considered and multi-faceted approach to the world around it. Opener ‘Death in Midsummer’, sonically jaunty with its baroque harpsichord loop and breezy vocal turn from Cox, is a lament on several levels – of all the hours lost in menial jobs, of the powerful lure of nostalgia (“there was no time to go back!”), of society’s gradual decay |(“look around and you’ll see what’s faded”). ‘No One’s Sleeping’ takes the dichotomy further; it’s musically sunny, with swells of brass leading into the chorus, but thematically about as dark as the album gets, inspired by the assassination of Jo Cox. You suspect this one particular flashpoint was chosen not because the Labour MP was Cox’s namesake but rather because of the dramatic, tragic manner in which division and tension spilled over so violently – the horns become more discordant as the song moves along.

Elsewhere, as the topics the band broach become broader, the sonic backdrop diversifies. The album has a strong grounding in sixties pop and maybe never more so than on ‘Element’, a languid reflection on the state of the ecosystem relative to our everyday lives. ‘Détournement’, meanwhile, veers off into a sort of low-level chaos that sounds like the musical manifestation of what you’d imagine travelling the world feels like in 2018. There’s a dreamy electronic backdrop, but ominous piano and spiky trumpets lurk beneath, whilst Cox’s spoken word vocals, a kind of international stream of consciousness (“hello, Russia! Hello, Australia! Hello, eternal jet lag”) evoke that last condition by being set in warped slow motion.

The guitars begin to sharpen on ‘Futurism’, the second track on the record to decry nostalgia even as the composition itself sounds steeped in it. The album’s most freeform moment is saved for last; the oblique notes distributed with ‘Why Hasn’t Everything Already Disappeared?’ mark out ‘Nocturne’ as a “live stream from the afterlife”, and perhaps this is Cox’s vision of what the next place sounds like. Over the course of six minutes, it transforms from lo-fi, minor-key near-balladry into an irresistibly pretty and hypnotic slipstream of subtle strings and spiralling synths. In a lot of ways, it’s the whole LP in microcosm, and ‘Why Hasn’t Everything Already Disappeared?’ is the first full-length of its generation to confront the escapism vs. engagement debate by planting its flag firmly in the middle. In thirty-seven minutes, it offers up a plethora of intelligently crafted societal takes and yet presents them invitingly enough that, if you’re so inclined, you can just let the music wash over you. Deerhunter are not here to prescribe you a message; they’re asking you a question, and giving you a choice.