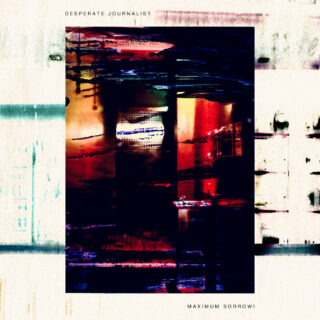 The fourth Desperate Journalist album was shaped by a desire to “create something a bit more kaleidoscopic and varied in tone and texture” than their earlier work. The London quartet have more or less achieved this with Maximum Sorrow!, which wears its pop culture influences on its sleeve to winning effect.

These are tracks in which characters confess that, unlike Lloyd Cole’s fantasies, they do not have ‘perfect skin’ and where, in contrast to The Undertones, it’s “teenage hang-ups [that] are hard to beat.” Frontwoman and lyricist Jo Bevan places these narratives within a world of urban decay and lost individuals that have stepped out of songs by Pulp or The Smiths.

The influences found in the lyrical landscape also form the basis of their sound. Rob Hardy has perfected Johnny Marr’s jangly guitar on ‘The Victim’; Simon Drowner’s melodic bassline on ‘Personality Girlfriend’ borrows from Andy Rourke; and ‘Utopia’ evokes the dirty escapism of Jarvis Cocker as Bevan paints a picture of a “One club town” where “All the motorway does / Is curve around.”

These early touchstones are bolstered by the gothic, shoegaze-noir of Siouxsie And The Banshees on ‘Fault’ and ‘Armageddon’. The latter, on which Caz Helbert liberally adapts the drum pattern on Kate Bush’s ‘Running Up That Hill’, gradually transforms into a heavier instrumental passage that’s gig-ready for joyful moshing.

Their control of dynamics is also present on ‘What You’re Scared Of’, a mini epic that forms a natural counterpoint to the reverb-soaked, synth-led ‘Formaldehyde’. On any other album it would be the closing track but here, with perhaps ill-advised sequencing, it concludes with the post-Britpop jangle of ‘Was It Worth It?’

It may be an odd note on which to end, but with its smart lyrics, energetic performances and heavy pop hooks the album is definitely worth it.