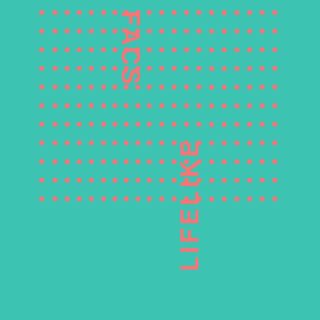 Bless bands with short albums. FACS’ second record is by no means a smash and grab job, but they get in and get out with maximum impact. Using the post-punk sound of their debut album, ‘Negative Houses’, as a springboard, the Chicago-based trio strike a more experimental tone on album two, pulling shoegaze and art rock into the realm of the industrial. The result is foreboding – a disorienting mix of guitar loops and multi-layered vocals that seem to herald an oncoming storm.

The ominous, axe-grinding effects on the well-titled ‘Anti-Body’, for example, are riddled with anxious energy, while ‘XUXA’’s detached vocals and bent chords seem to mimic an out of body experience.

Throughout, the band deploys a strange sort of minimalism, using few elements but sometimes layering and recycling them almost to excess. There’s a pattern here – the six tracks on ‘Lifelike’ wind tight and then unspool in a furious maelstrom, the multi-tracked vocals giving way to an extended instrumental flood to close. The formula makes for a cohesive whole, but can mean that some tracks mirror others a little too closely. This isn’t always the case, of course; ‘In Time’ is a stand out, with a spaced-out vocal that sounds like Beck singing through a sheet of tinfoil in the best possible way. Meanwhile, closer ‘Total History’ can barely contain its own sonic heft, with guitar tracks swarming together. Here on their second record, FACS are a storm in a teacup.