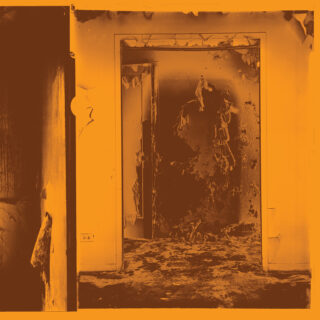 There’s an alternate universe in which Chicago industrialists FACS can fill arenas. Yes, their music is deep, dense and awkward, but their experimentalism is worn lightly, even when their sonics are heavily laden with noise and dissonance. Much of it is no more abrasive than, say, Radiohead’s more inquisitive moments, and a good deal less po-faced. Its seriousness is genuine, but undergirded by a subtle sense of mischief and slyness, not to mention the sheer cathartic grunt of their iron-clad rhythm section.

Present Tense more or less picks up from where last year’s Void Moments left off: mechanistic grooves drag subterranean bass along beneath sulphurous clouds of guitar and feedback, haunted by intermittent, foreboding vocals from Brian Case.

‘Strawberry Cough’ is perhaps the most accessible moment on the record, bionic dub percussion and a surprisingly catchy chorus evoking a chrome-plated Fugazi. And like D.C.’s finest, FACS manage to hit the elusive sweet spot between genuine innovation and lean, fat-free economy – there are tons of ideas here, but they’re woven into the intricacies of each track, rather than confined to extended wig-outs or shoehorned determinedly into too-tight spaces.

Album closer ‘Mirrored’ is a case in point. The horn-locking guitar arrangement interlaces with a half-speed jungle beat from the octopus-like Noah Leger, between and beneath which Alianna Kalaba’s dextrous bass traces a twisting outline that just about holds everything together. The constituent parts are so complex and jagged that they’d border on math-rock were they not cloaked in such doomy, metallic atmospherics – again, the restless invention and technically-demanding nature of the arrangement is downplayed by its cumulative power. That really is much harder than it looks, and a very good thing indeed