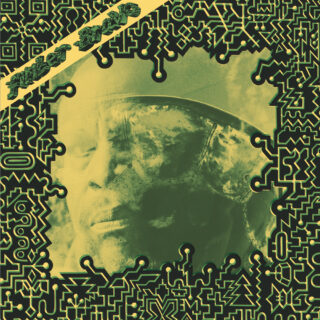 A magnetic force at the beating heart of protest music for nearly half a century, steel pan wizard Fimber Bravo speaks to the resistance with a new compulsion on the opening seconds of Lunar Tredd, strengthened with experience: “They ban our street voice and they choke we, we still shout ‘you can’t control we’.” The pulsing metallic beat and undulating grooves of his first new music in seven years tumble around his politics, brazenly collaborative and emboldened in the wake of the Black Lives Matter movement across the globe. His production sounds more joyous than ever, weaving his own fusion of afrobeat and highlife with the glossy sheen of Western synth-pop and electro from the album’s family of players.

It’s likely that you’ll have heard the music or influence of Fimber Bravo in some capacity before, if not his first widely-released solo album in 2013, Con-Fusion. The melody in Gwen Stefani’s ‘Hollaback Girl’ was snatched from ‘Heaven and Hell is on Earth’ by 20th Century Steel Band (of which he was band leader), sampled by Salt-N-Pepa, the Black Eyed Peas, LL Cool J and – best of all – J Lo’s ‘Jenny From The Block’ (“Everybody’s got to earn a living”). He was musical director for roots band Steel An’ Skin’s ‘Afro Punk Reggae Dub’, steeling reggae and disco rhythms with his Trinidadian-by-South London twists, turning seven minutes of hypnotic funk into a veritable cult classic. His work with artists like Michael ‘Bubbles’ Oliveria – who wrote both tracks quoted above – casts a long shadow over contemporary pop.

Lunar Tredd is a carnival at its heights and at its most reflective. The only constant across its twelve tracks is Bravo’s steel pan and refreshingly easy vibe, offering a deep inhalation above its neon-drenched interior. Senegalese percussionist Mamadou Sarr contributes brilliantly to the title track, while Hot Chip and The Invisible drummer Leo Taylor provides a propelling rhythmic drive throughout, from the wallowing introspections of ‘Santana’s Daughter’ (co-written with Susumu Mukai) to ‘SingO’, which recalls a Woodstock-era Santana on its bouncing thrum. Alexis Taylor’s synths reverberate around psych meditations, beautified by The Horrors’ Tom Furse and Vanishing Twin’s Cathy Lucas on ‘F.Pan Landing’.

As with many of the new sounds entering the world in its current paralysis, dance music reverberates with a particularly uncanny echo. Even with the spellbinding bass of ‘Hiyah Man’ and addictive drones of ‘Tabli Tabli’, Fimber Bravo’s weathered vocal is the centrepiece, unifying the record’s strands of tradition and experimentalism, from Calypso and West African Kaiso to sickly sweet autotune. On Lunar Tredd he leads both a drowsy dance and a festival elegy, longing to be distilled. He’s a master of his craft, and it’s best when it’s all him.