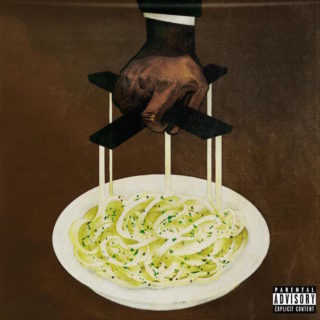 Alfredo sees Freddie Gibbs, the undisputed bard of the Midwest, team up with high-flying Beverly Hills producer The Alchemist, reigniting a partnership that dates back to 2018’s Freddie. It may be a follow up to Gibbs’ last year’s career-best album Bandana, but The Alchemist is on something of a hot streak as well, boasting recent projects with Boldy James and Conway the Machine. ‘Alfredo’ captures a master beatmaker totally in tune with how to get the best out of a sublimely talented rapper, and vice versa.

A lot of Freddie Gibbs’ recent fanfare can be attributed to his 2014 and 2019 collaborations with Madlib. On both Bandana and Piñata, Gibbs is pushed out of his comfort zone by the Californian producer’s beat tomfoolery, but really thrives at the challenge. Alfredo is a whole different kettle of fish however. Its pearly, luxurious sprawls are custom-made for Freddie Gibbs’ acrobatic flow; this album sparkles.

As Gibbs makes his way through densely referential verses with ease, the assumption at time of recording was have been that the nods to Tiger King and Michael Jordan’s The Last Dance would feel most relevant to a quarantined audience. This is not the case, however; the Gil Scott-Heron sample at the end of ‘God is Perfect’ segues into ‘Scottie Beam’, where Gibbs takes a step back to deliver one of the most powerful lines of recent times: “The revolution is the genocide / Your execution will be televised.”

The Indiana rapper is aided by a decent group of features – Rick Ross has some good lines, Tyler, The Creator is ultra-functional, and Benny the Butcher provides an album highlight on ‘Frank Lucas’ – but in the end, this record is entirely about Freddie Gibbs. His technical qualities as a rapper are unbelievable, but above all else his charisma is electric, and his one-liners are fantastic. Alfredo is a record that captures an unparalleled talent thriving in his element.