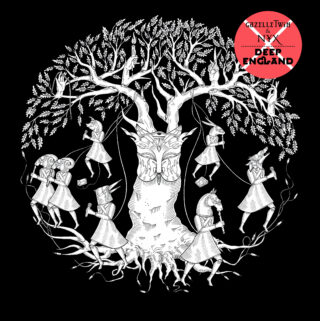 In her ‘red imp’ garb, Bernholz was a tracksuit-wearing jester, a plague doctor extracting her energy from the utter chaos of the world and nation around her. In old faerie tales such as those that inspired Pastoral, the appearance of such a devilish sprite as Gazelle Twin would have been taken as a warning of mortal peril, but in the years following the album’s release, it feels as if we’ve chosen to only increase the pace at which we approach the void.

Deep England is a series of reconstructions of Pastoral’s material, made in collaboration between Bernholz and the NYX electronic drone choir. Juddering electronics are much less frequent, whilst atmospheric woodwind landscapes, drones and the ghostly harmonies of the choir take centre stage. Although they were present on Pastoral, the melodies and textures of Deep England really expand upon the former record’s exploration of Celtic and English traditional musics, placing the new album in a much more rural sphere, in which crescendoing vocal harmonies are the sound of the generations of malcontent.

Subsuming opener ‘Glory’ stretches out eternal with earthy drones, while a particularly arresting version of ‘Better in my Day’ is the centrepiece – manipulated vocals form a barbed backing track for caustic incantations of jingoistic rhetoric. Where Pastoral is a deeply claustrophobic affair, Deep England is a dizzying work that, thanks to off-kilter choir reinterpretations, sounds vast and unimpeachable. Bernholz’s work remains pertinent, very much the music of now; new life is breathed into her songs on Deep England by a deeply powerful choir and are all the better for it.